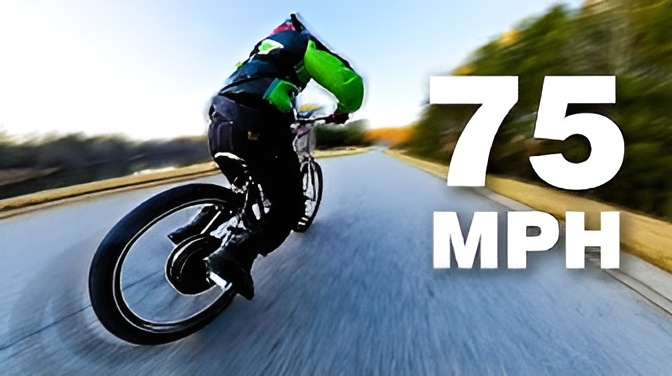 A recently posted video shows a modified e-bike, capable of hitting 75mph, driven on the street, showing the future of micro-mobility options.

As electric vehicles have remained incredibly expensive and difficult to own in dense urban areas, more and more people have considered e-bikes as their daily transport. Not only do they offer cheap and efficient transportation, but thanks to the ever-expanding amount of possible modifications, people are making their bikes faster than ever.

One great example of this is seen in a video posted on Youtube earlier this week, showing what one man has done to his bike:

Backyard enthusiasts aren’t the only ones looking to expand the capabilities of e-bikes. SUPER73, a bike manufacturer which got its start as a Kickstarter, has slowly but surely been introducing more options that will go faster and further and are capable of holding and transporting more than ever before.

This e-bike arms race has recently resulted in SUPER73 producing its first fully street-legal electric motorcycle that will allow those with a motorcycle license to get up to roughly 75 mph.

Even traditional bike and motorcycle manufacturers are getting in on the trend of ever-faster and more capable bikes. Ducati has released its own e-mountainbike, the Ducati TK-01RR. While road bike manufacturers like Trek and Cannondale have entered the mix with e-bikes that are lighter than ever with the help of full carbon fiber frames, more lightweight and purpose-built motors and batteries, and specially-made gear components.

Micro-mobility will likely only grow in popularity in the coming years as more and more people move to dense urban areas and look for simple, cheap, and efficient ways of getting around. And in a world that is now more than ever focused on reducing carbon emissions, this may be one of the best solutions out there.