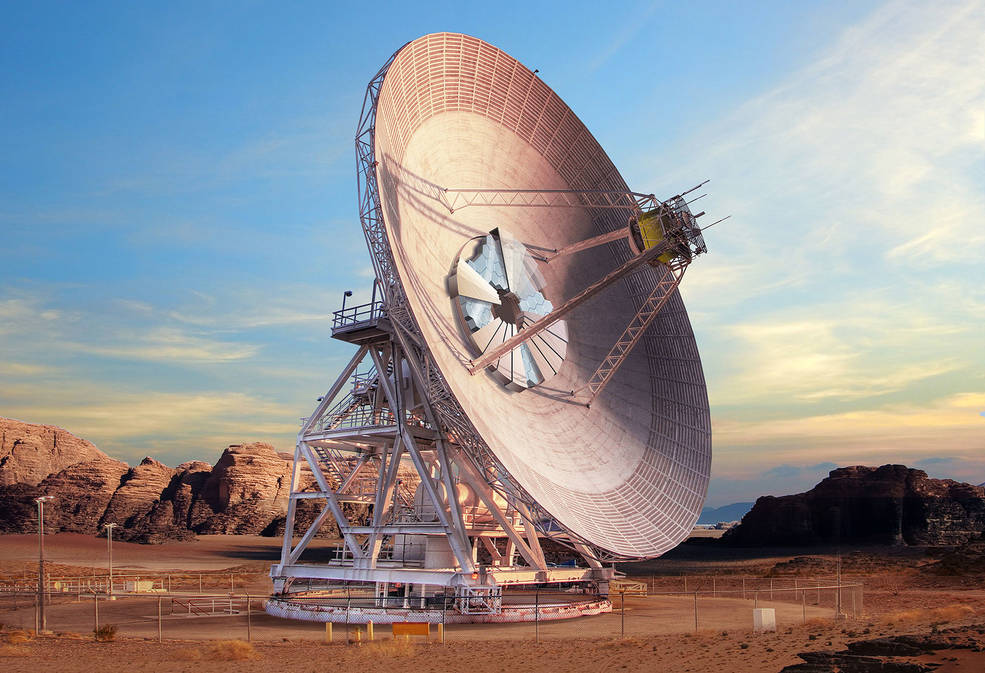 This artist's concept shows what Deep Space Station-23, a new antenna dish capable of supporting both radio wave and laser communications, will look like when completed at the Deep Space Network's Goldstone, California, complex. Credits: NASA/JPL-Caltech

Ever wonder how spacecraft spread throughout our solar system communicate with Earth? They do so through an international array of radio antenna known as the Deep Space Network. The network consists of 12 antennas at three separate locations: Goldstone, California; Madrid, Spain; and Canberra, Australia. NASA chose these locations because they’re each 120 degrees apart from each other, so satellites can always talk to Earth one of the stations.

“The Deep Space Network is Earth’s one phone line to our two Voyager spacecraft—both in interstellar space—all our Mars missions, and the New Horizons spacecraft that is now far past Pluto,” Jet Propulsion Laboratory Deputy Director Larry James said in a statement. “The more we explore, the more antennas we need to talk to all our missions.”

NASA is preparing for the future as more Mars missions come online and we start to send astronauts to the moon and beyond. So the space agency is adding to its current network. On Feb. 12, NASA broke ground on the new antenna, which will be added to the Goldstone site in California.

The 112-foot-wide dish, called Deep Space Station-23 (or DSS23), will take about two and half years to build. And it’s not the only addition NASA is planning. Space is getting crowded, and with the push to return to the moon and eventual plan to send humans to Mars, NASA wants to make sure it has plenty of bandwidth to communicate. To that end, the space agency aims to build an additional five antennas.

“Since the 1960s, when the world first watched live pictures of humans in space and on the Moon, to revealing imagery and scientific data from the surface of Mars and vast, distant galaxies, the Deep Space Network has connected humankind with our solar system and beyond,” said Badri Younes, NASA’s deputy associate administrator for Space Communications and Navigation, or SCaN, which oversees NASA’s networks. “This new antenna, the fifth of six currently planned, is another example of NASA’s determination to enable science and space exploration through the use of the latest technology.”

This is the first addition to Goldstone since 2003, and the new dish is being built at the complex’s Apollo site — named because its DSS-16 antenna supported NASA’s human missions to the Moon. The new dish being built will be able to support more missions with advanced technology, like lasers, which are capable of transmitting vast amounts of data from far out in the solar system as well as from astronauts on the lunar and Martian surfaces.

“Lasers can increase your data rate from Mars by about 10 times what you get from radio,” said Suzanne Dodd, director of the Interplanetary Network, the organization that manages the DSN. “Our hope is that providing a platform for optical communications will encourage other space explorers to experiment with lasers on future missions.”

Similar antennas have recently been built at the Canberra site and two are currently under construction in Madrid. The Deep Space Network is managed by NASA’s Jet Propulsion Laboratory in Pasadena, California, and even has its own website where viewers can see which DSN dishes are talking to which spacecraft at any given time.