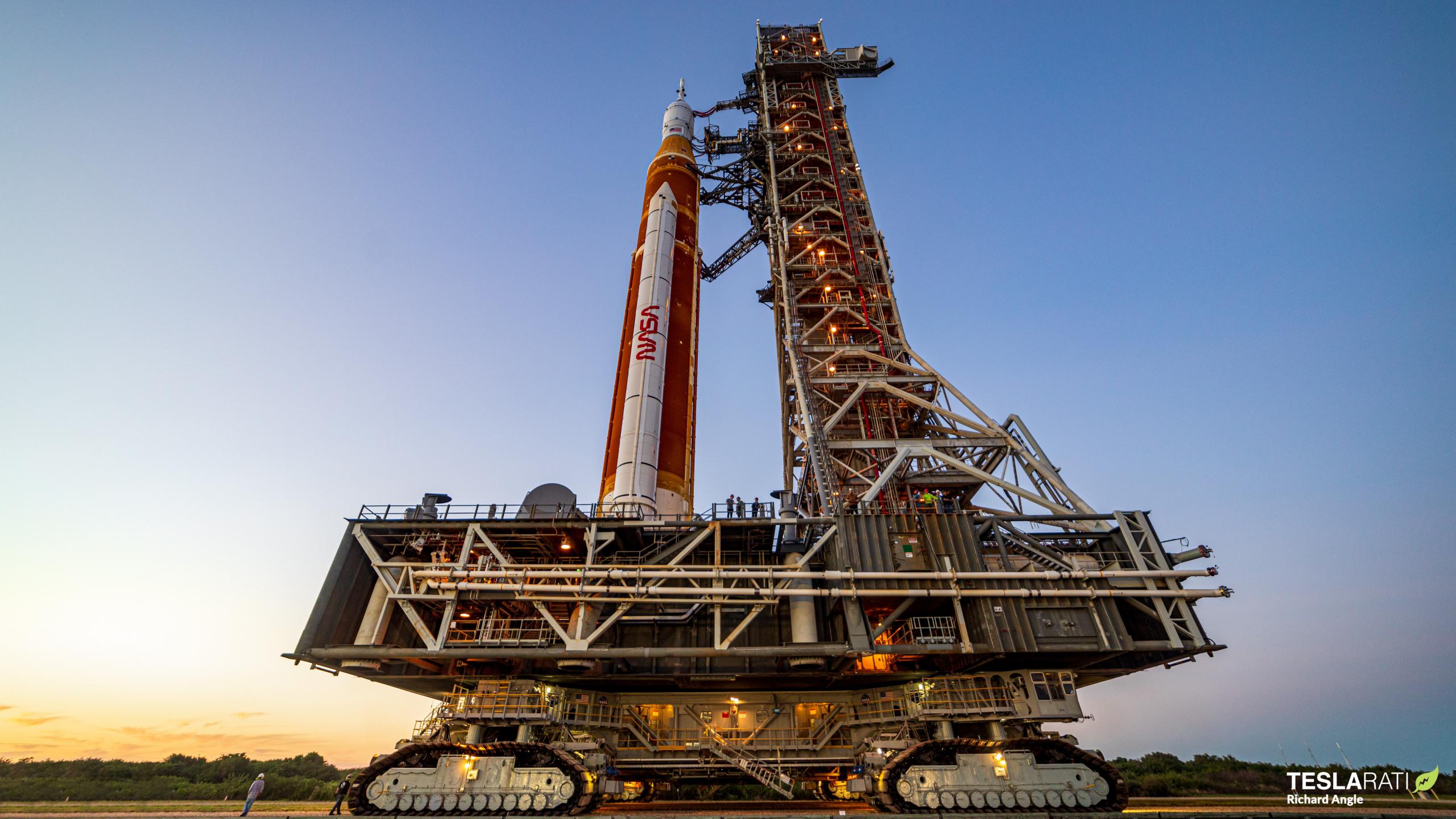 NASA says it's on track to roll its first SLS Moon rocket to the launch pad two days ahead of schedule. (Richard Angle)

NASA has given the go-ahead to roll its Space Launch System (SLS) Moon rocket to the launch pad two days ahead of schedule.

That bodes well for plans to launch the rocket for the first time (a milestone NASA originally hoped to pass in December 2016) as early as late August or September 2022. NASA says that its first SLS rocket is now on track to begin a roughly 24-hour journey to Kennedy Space Center’s LC-39B launch pad at 9 pm EDT on August 16th. That will kick off approximately two more weeks of work that could finally culminate in the rocket’s first real launch attempt as early as August 29th, a moment anywhere from 12 to 16 years in the making.

SLS was created by Congress in 2010 when the legislative body drafted a law demanding that NASA develop a heavy-lift rocket to replace the Space Shuttle. In practice, Congress (particularly several key stakeholders with former Shuttle workforce and facilities in their states or districts) was primarily interested in keeping former Shuttle infrastructure active and workers employed, and left NASA to figure out how to retroactively engineer a rocket out of a list of legal requirements mostly driven by politics.

NASA ultimately devised a rocket that would extrapolate Shuttle external tank technology into a larger liquid hydrogen/oxygen ‘core stage’ powered by four flight-proven, reusable Space Shuttle Main Engines (SSME; now RS-25). A relatively small orbital upper stage derived from Boeing’s Delta IV rocket would sit atop the core stage, which would be augmented with two stretched Shuttle-derived solid rocket boosters (SRBs). Altogether, the first variant of SLS – Block 1 – is expected to be able to launch up to 95 tons (~210,000 lb) to low Earth orbit and around 27 tons (~59,500 lb) to the Moon, 32% and 38% worse than the Saturn V rocket NASA abandoned for the Space Shuttle in the 1970s.

Nevertheless, SLS will likely become the most powerful rocket currently in operation if it successfully debuts within the next few months. Only SpaceX’s Starship, which will eventually launch a Starship-derived Moon lander for NASA, is likely to challenge or beat the performance of SLS within the next 5-10 years.

However, after more than half a decade of delays and around $25 billion spent without a single launch to show for its investment, NASA no longer has any near-term plans to use SLS for more than sending a few astronauts on their way to the Moon once every year or two. The only tangible payload currently assigned to SLS Block 1 is NASA’s own Orion spacecraft, an earlier version of which Lockheed Martin began developing for NASA in 2006. Approximately 16 years and $25 billion later, the Orion capsule will be better than the Apollo Program’s Command module (capsule) by most measures, but its service (propulsion) module will be far worse.

With about half as much usable delta V (propulsive capability) as the Apollo CSM, Orion is incapable of transporting astronauts to the same convenient low lunar orbits that the Apollo Program used, forcing NASA to send it to high, exotic alternatives. As a result, NASA has been forced to create a multi-billion-dollar destination for Orion (the Gateway station) and complicate the mission of new Moon landers like SpaceX’s Starship.

Countless pitfalls and shortcomings aside, NASA is about to finally roll the fourth most capable flightworthy rocket ever assembled (behind Saturn V, N-1, and Energia) to the launch pad. Regardless of the outcome of the mission, SLS will likely be the fifth largest rocket (including the Space Shuttle) ever launched when it lifts off. If that launch is successful, the achievement will be even more impressive, marking the third time out of three attempts that NASA has successfully launched a super heavy-lift launch vehicle (>50t to LEO) on its first try.

A successful Artemis I launch would also give the Orion spacecraft an opportunity to enter orbit around the Moon and test most of the systems it will need for Artemis II, which is intended to carry two astronauts. Orion won’t carry or test any life support or docking systems, making it only a partial demonstration, but it will still be the first time a prototype of a crewed spacecraft has attempted to enter lunar orbit since December 1972.