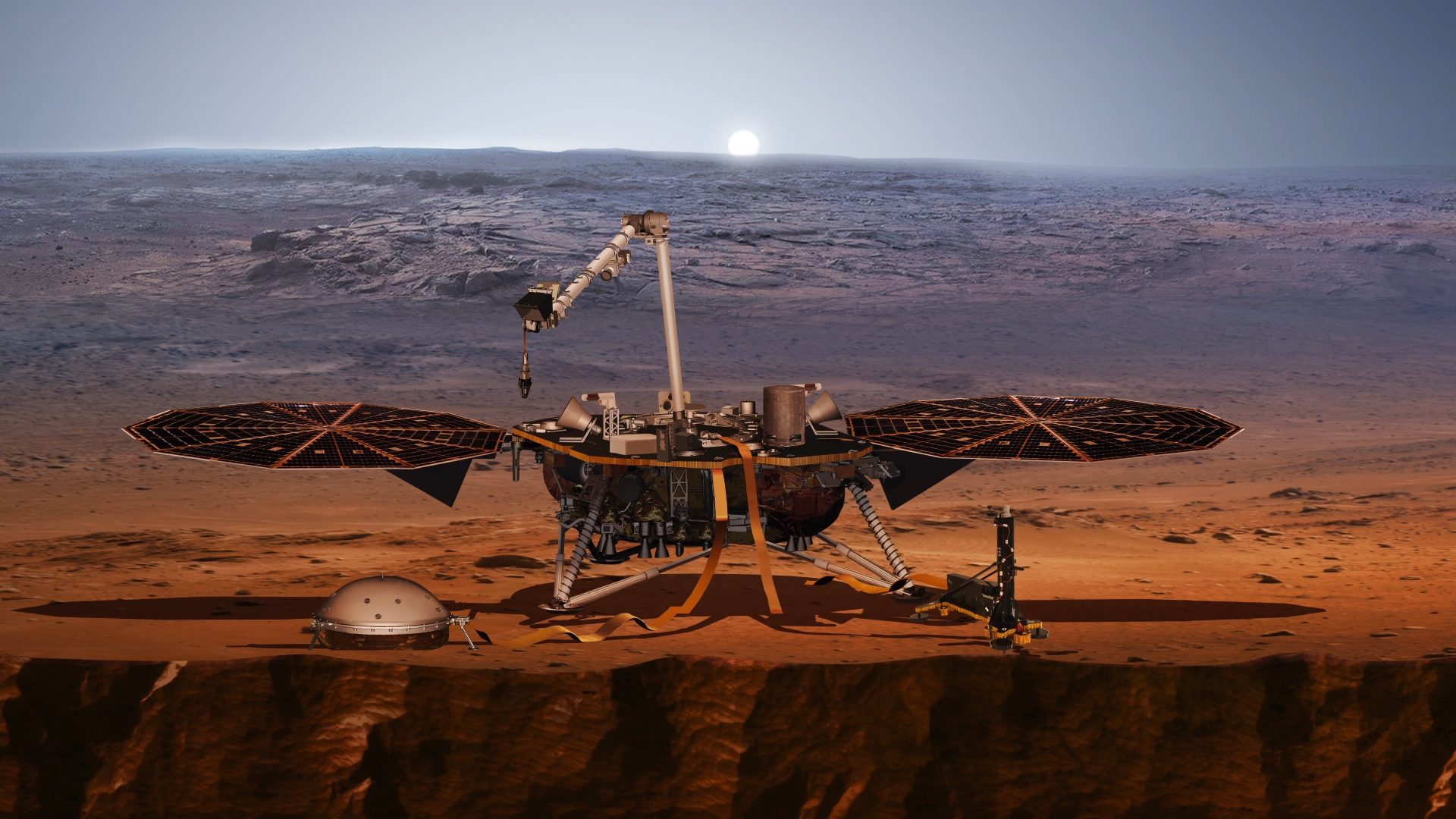 On Monday, November 26, 2018, a Mars lander will arrive on the surface of the red planet for the first time in six years, and NASA will broadcast the event live on their TV channel and website. The craft’s name is “InSight”, and it’s scheduled to complete its journey begun May 5, 2018 on an Atlas V rocket by setting down onto Martian regolith at approximately 3 pm EST. A video stream of Mission Control at the Jet Propulsion Laboratory in California will be available where viewers can listen to live landing commentary. InSight’s descent itself will not have a video component; however, photographs of the craft while parachuting and shortly after landing may be transmitted.

Truly enjoyed the experience of my first AtlasV launch, and all the excitement surrounding this incredible mission! Rather surprised my remote cams survived AND managed to capture *anything* in that totally rude fog. 🙂 Here are a couple shots. @NASAInSight @ulalaunch pic.twitter.com/XEH4zBLWpu

InSight’s name is short for “Interior Exploration using Seismic Investigations, Geodesy and Heat Transport”, and as the name implies, its mission is to collect seismographic data from the surface of Mars in order to gather information about the planet’s core. The lander has six instruments on board that will propogate seismic waves through Mars’s interior after hammering a probe about 10-16 feet into the ground, a process which will take about 2-3 months to complete. The vibrations measured at the surface will then be measured and interpreted to reveal details about its layers and, by extension, the early formation of both it and Earth.

Unlike a rocket launch where delays are always possible, you can safely mark your calendar for this event. NASA can’t change this date even if they wanted to thanks to the physics involved in the lander’s interplanetary flight. If you’re interested in celebrating InSight’s Martian arrival in a community setting, watch parties open to the public are planned at scientific facilities and libraries around the world.

Viewers of the live streamed landing will hear updates from scientists as they track InSight’s journey from a fiery entry speed of 12,300 mph to a 5 mph landing speed. Drag against the craft’s heat shield, parachutes, and retrorockets will slow its descent. The mission’s scientists hope to receive an image of the Martian surface shortly after, but they’ve cautioned that the initial photos will likely be cloudy due to dust kicked up from the event.

InSight will land in Mars’s Elysium Planitia (“the biggest parking lot on Mars”), an area near the planet’s equator. Its closest Earth-sent neighbor, the Curiosity rover, will be 240 miles away, and twin rovers Spirit and Opportunity will be located 1,600 and 5,200 miles away, respectively. Once on the surface, InSight’s first steps will be to unpack and deploy its solar panels to ensure power for the rest of its instruments.

The solar panels will provide about 600-700 watts on a clear Martian day, 200-300 during dustier conditions. For more perspective on this power source, NASA’s press release likened its maximum wattage to the requirements of a household blender (500 watts). The amount of energy converted just falls short of running a coffee machine (1000 watts), but plenty to “wake up” the lander after sleep, even if not a human.

As a bonus for space fans, InSight did not set out on its interplanetary mission alone. Twin demonstration mini satellites named “Mars Cube One” (MarCO) launched with the lander and traveled separately to the planet. Along with having completed successful radio, antennae, steering, and propulsion tests during their journey, MarCo will test a new kind of data relay from Mars orbit during InSight’s descent to the surface. InSight will not depend on successful transmissions to and from MarCo to land.

MarCO also marks the first deep space mission for a type of tiny satellite called “CubeSats”, a class characterized by a small form factor and miniaturized technologies that are often commercial, off-the-shelf components. MarCO fits this category and each satellite is about the size of a briefcase. The significantly lower development and launch costs of CubeSats compared to larger satellites have already opened space science to students and limited budget commercial initiatives. The success of MarCO in the deep space environment will now potentially open up interplanetary exploration beyond government agencies to encompass more civilian initiatives.

Watch NASA’s video below to learn more about the lander: