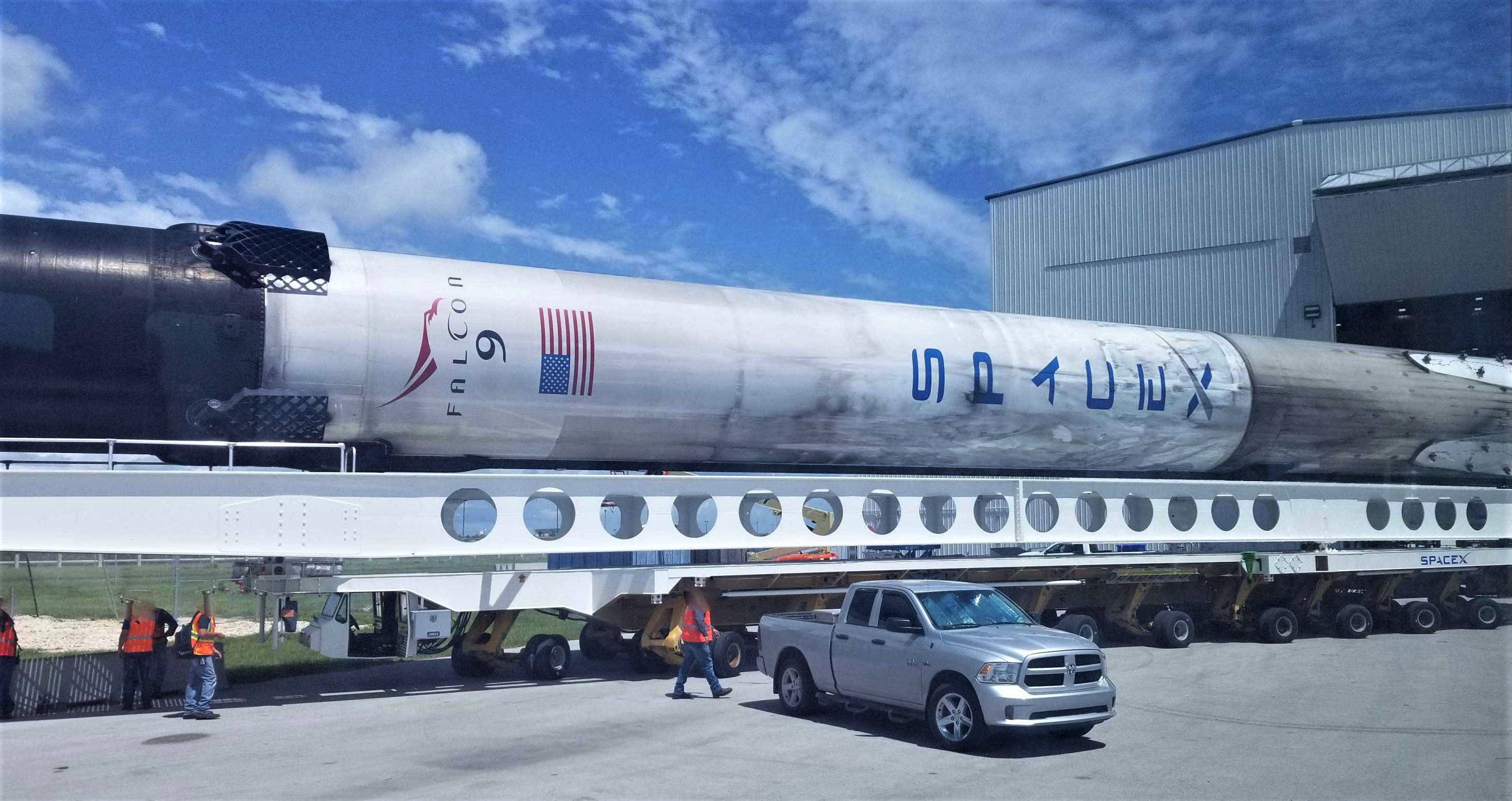 SpaceX’s fifth Falcon 9 Block 5 first stage was spotted a few dozen miles away from arriving at Cape Canaveral at the same time as a freshly launched and landed Block 5 booster was being transported from its drone ship at Port Canaveral to Kennedy Space Center.

The now flight-proven booster in question – B1047 – completed a successful launch of the massive 7100 kg Telstar 19V satellite on July 22nd (EDT), after which it landed safely aboard East Coast drone ship Of Course I Still Love You. Three days after that, sooty Falcon 9 B1047 arrived at Port Canaveral, where it took five days to prepare for transport to one of SpaceX’s several Floridan refurbishment facilities. That transport was captured by an impressive number of independent observers from start to finish, in this case winding up at Pad 39A’s hangar (or horizontal integration facility, HIF) for examination and refurbishment before its next launch. 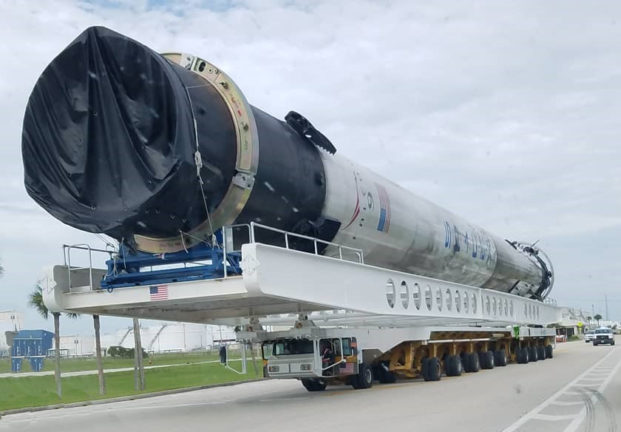 B1047 returned safe and sound to Pad 39A for refurbishment less than a week after launching and landing. (Instagram /u/d_lo_ags)

Likely taken around the same time, Instagram /u/acslater90 took this photo from the opposite direction. (Instagram – acslater90) 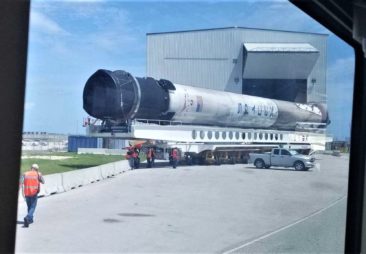 Simultaneously, multiple separate members of the subreddit /r/SpaceX observed a different Falcon 9 rocket booster being transported in Western Florida and later Orlando, this time a brand new core shrink-wrapped in the usual black plastic – fresh from static fire testing in McGregor, Texas. A photographer flying in the area in mid-July caught the most likely booster candidate (B1050) vertical on the Texas static fire test stand, rounding out a dizzying array of photos documenting SpaceX’s rigorous test and transport system in action over the last several months.

B1050 will likely be tasked with lifting communications satellite Es’hail-2 in very late August or early September. Intriguingly, the appearance of B1050 in Florida also happens to indicate that SpaceX’s next West Coast launch – SAOCOM 1A, NET September 5th – will have to launch aboard a flight-proven Block 5 booster, of which B1047 and B1048 will be up for consideration. B1051, the next new Block 5 booster expected to ship from Hawthorne to Texas to launch pad, is specifically reserved for SpaceX’s first Crew Dragon mission (DM-1), an uncrewed demo flight that could launch in October or November. 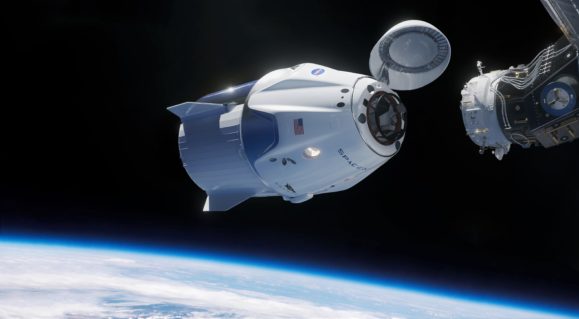 Crew Dragon gleams in the orbital sunlight before the ISS. The spacecraft’s first launch has reserved Falcon 9 B1051, the next serial booster expected to leave SpaceX’s factory.(SpaceX) 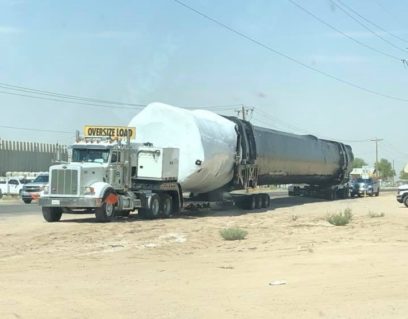 Falcon 9 B1050 on its way to McGregor for static fire testing, July 6th.

Two weeks after it was spotted on the McGregor static fire stand, B1050 rolled into Orlando, FL on July 31st, headed East to Cape Canaveral. (Reddit – alexbrock57)

It’s likely that B1051’s testing and static fire in McGregor will take much longer than the average booster acceptance testing, meaning that the facility’s Falcon 9 booster test capabilities will likely be saturated for a month or longer, pushing B1052’s commercial launch readiness into late September or early October. In reality, B1048 is the only practical option for an early or mid-September launch in California, and that tentative and unofficial booster reflight would crush the current rocket turnaround record by more than four weeks (42 days vs. 72 days).

Booster B1048 just completed its successful debut with the launch of Iridium NEXT-7 and has been under the watchful care of SpaceX recovery technicians since its July 27th return to Port of San Pedro aboard autonomous spaceport drone ship Just Read The Instructions (JRTI). Of particular note, SpaceX technicians took the extraordinary step of opening up B1048’s Merlin engine service bay panels (one per engine along the circumference of the rocket’s base) for several hours on July 30th.

As far as Falcon recoveries go, SpaceX has never been documented performing a similar procedure while the booster is still dockside – perhaps it’s related to the fact that B1050’s East Coast arrival means B1048 will have to be ready for its second launch faster than any SpaceX rocket before it. 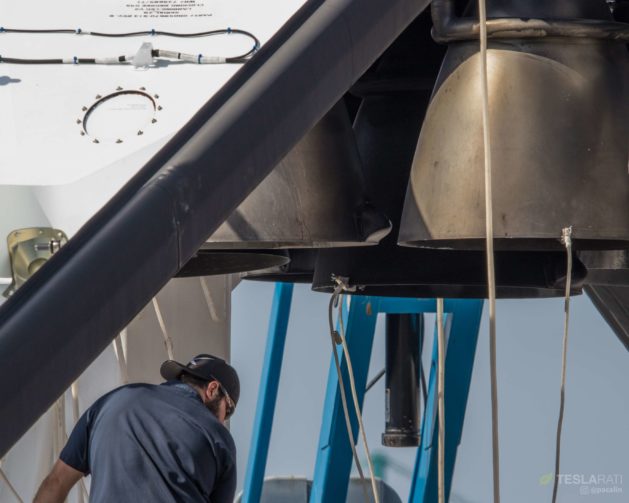 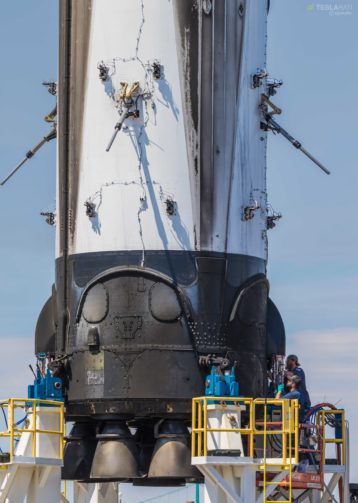 SpaceX technicians examine F9 B1048’s quick-disconnect panel, the interface for much of the vehicle’s fluids and on-pad communications. (Pauline Acalin, 07/30/18) 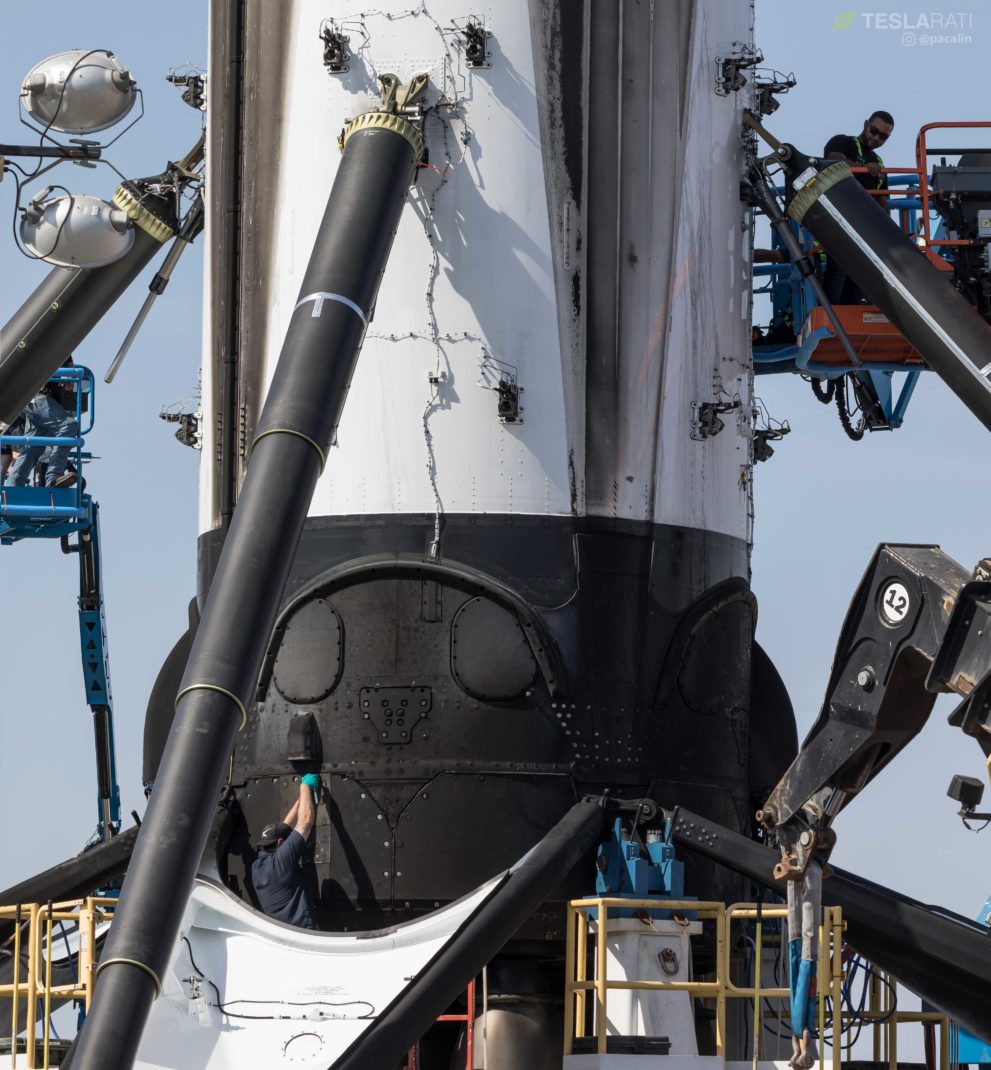