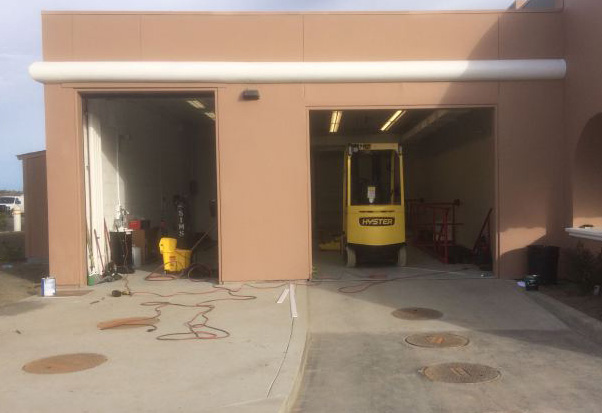 An early look at the battery swap location in Harris Ranch, photo courtesy of TESLA OWNER

Tesla Motors released details about its battery swap pilot program last Friday and confirmed that the location is Harris Ranch, Calif, off of I-5. The pilot program will gauge demand for a battery swap on the very busy I-5 and also provide real-time data for the car company on how fast it can execute a battery swap, with the goal of three minutes stated in the “Battery Swap Pilot Program” post. A peek into the possible battery swap bay and the stairs below. (Photo Courtesy of TESLA OWNER)

Originally, the battery swap demo from some years ago showed that the battery pack could be removed in under minute, but since then the company has added titanium and hardened aluminum ballistic shields to battery packs. However, the company feels with more automation, it could  get close to a one minute replacement.

A Model S driver, who also writes for the Tesla Owner blog site, was visiting the Supercharger station in Harris Ranch last week when they ran into a construction project at an old car wash. These are their photos and we thank them for sharing these excellent shots with us.

Here’s a great image of what looks to be the interior of the battery bays.

At least initially, battery swap will be available by appointment and will cost slightly less than a full tank of gasoline for a premium sedan, according to Tesla Motors.

Also, the addition of battery swap stations does not provide more ZEV credits to Tesla Motors. A Tesla Motors executive checks out progress at the facility. (Photo Courtesy of TESLA OWNER)