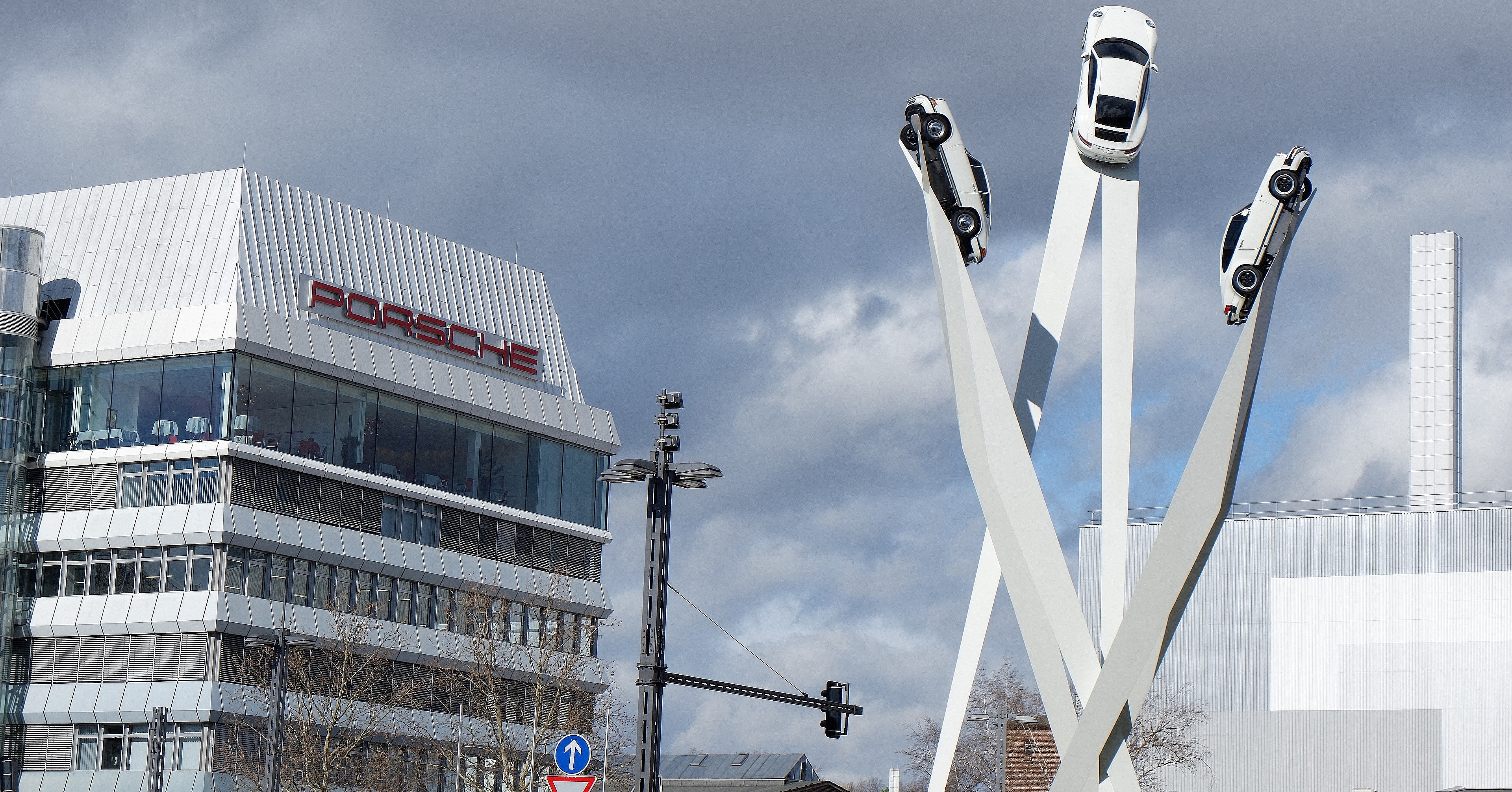 Beside the red-bricked walls of Porsche’s headquarters at Zuffenhausen, an electric transformation is taking place. It is a transformation that echoes back to its earliest days, despite the company’s pedigree with the internal combustion engine. Tall, modern-looking buildings sit side-by-side with older factories and shops that have literally witnessed history. The faint sounds of heavy machinery are audible in the distance, a reminder that work in the historic site is ongoing.

Porsche is actively engaged in a massive construction project in its Stuttgart-Zuffenhausen site, roughly 120 miles from Frankfurt, with the company running full throttle as it prepares for the production of the Taycan. The result of these efforts could only be described as a rebirth of sorts, since the company that started with an electric car is now pushing itself to re-embrace all-electric vehicles, perhaps just as intended by its founder, Ferdinand Porsche, more than a hundred years ago.

A lot is riding on the Porsche Taycan. During the company’s annual press conference, Porsche CEO Oliver Blume and Deputy Chairman of the Executive Board Lutz Meschke emphasized how all-electric vehicles like the Taycan and its lineup of hybrid cars are pertinent for the company’s future. In a statement, Meschke noted that by 2030, vehicles powered by an internal combustion engine would likely be the exception to the rule.

“One thing is clear: from 2030 onwards; there probably won’t be any vehicle model from Porsche without an electric variant. I actually presume that by 2025, we will have electrified significantly more than half of our entire model range. But the combustion engine will still be around in 2030. Our 911 will hopefully still be driving with them for a long time to come. Conventionally powered vehicles will at that point be the niche in our electric fleet,” he said.

Before it can produce a successful electric vehicle, Porsche needs to ensure that it has the facilities necessary to build a completely different type of car. The veteran automaker opted to construct several new facilities to accommodate the Taycan’s production, and it had to overcome numerous challenges to make the buildout possible. The Zuffenhausen site is a stone’s throw away from a residential neighborhood, and the site itself is split by a four-lane road. With space being scarce, Tryggvason notes that the company did the only thing it can do: it built up. Overall, building the Taycan is complex. Setting up the facility even more so. For the project manager, the challenges were worth it. “We believe in the product,” David said.

The company’s bet on the Taycan is evident in its investment for the vehicle and the actions of its own employees. Porsche is spending about 6 billion euros (around $6.81 billion) for the development of its electric mobility initiatives. Porsche Production 4.0, a campaign aimed at ushering in a new era of vehicle production, is also underway. Accelerating these developments is a deal that the carmaker struck with its employees, who agreed to forego a small part of their collective salary increase in exchange for their participation in the Taycan’s production and release.

David Tryggvason and Porsche Press Spokesman Jorg Walz later directed me to the roof of one of the new buildings, and I was able to get a pretty good view of the factory itself. They pointed out how the Taycan starts its life by having its electric motors, batteries, and axles assembled. The electric car’s body then gets put together, painted, and transported across a long conveyor system where it can go through final assembly and married to its electric drive unit.

A key to the successful production run of the Porsche Taycan is the company’s target of manufacturing the vehicle in a “smart, lean and green” manner. Examples of these include a flexi-line that uses automated guided vehicles for simpler assembly despite the expansive customization requests from Taycan buyers, optimizations in the use of resources and space, and an initiative to ensure that the entire production process of the all-electric car at Porsche’s Stuttgart-Zuffenhausen site is CO2-neutral. This is made possible through several programs such as the electrification of logistics vehicles, the use of waste heat in the paint shop, and a pilot trial that involves the adoption of nitrogen-absorbing facade surfaces, to name a few.

Not one to waste a rare opportunity to ask for details about the Taycan, I decided to ask a little about the electric car’s battery performance. Over the past year, several great electric vehicles were released by veteran carmakers such as Jaguar and Mercedes-Benz, but inasmuch as the machines themselves were impressive, their batteries left much to be desired. The I-PACE, for all its stunning interior and excellent design, is pretty much the electric equivalent of a gas guzzler. The Mercedes-Benz EQC seems to be the same.

Porsche uses pouch cells from LG Chem in the Taycan’s battery pack, which is expected to give the vehicle over 300 miles of range per charge under the NEDC standard. The company is aiming for ultra-fast 350 kW charging as well, thanks to its 800-volt technology, which was used first in Porsche’s LMP1 racecar 919 Hybrid. I asked how the Taycan’s battery holds up when charged continually with such a high rate of charge. Walz smiled and candidly stated “We’re very optimistic.”

After the annual press conference, I was able to sit in for an informal discussion of Porsche’s electrification with executive board member Detlev von Platen. The Porsche exec highlighted that the Taycan’s battery cells were closely developed by the company, thanks to its experience from its high-performance hybrid vehicles. Examples include the legendary Porsche 918 Spyder hypercar and the three-time Le Mans-winning Porsche 919 Hybrid racecar, both of which required some work in their batteries.

“So we’re absolutely involved, deeply involved, in the development of the (Taycan’s battery) cells and the technology behind it. We haven’t started last year with the Taycan. We have worked since a long time already on battery technology from motorsport. Our prototypes like the 919 Hybrid was electrified. So I would say, in general terms, that we have started to work on battery technology at least ten years now,” Von Platen candidly said.

I was reminded of David Tryggvason’s overview of the Taycan’s components a couple of days before, when he remarked that some of the Porsche personnel who worked for the 918 Spyder hypercar also worked in the development of the Taycan. Upon hearing Von Platen’s description of Porsche’s work with batteries, I couldn’t help but agree with his point. Porsche has produced several iconic vehicles in the past, and the majority of them are powered by the internal combustion engine. Despite this, it is difficult to argue that the best cars the company has ever produced, such as the 919 Hybrid, are imbued with electric propulsion at their core. Beneath the roaring engines of the vehicles were electric motors and batteries that ultimately unlocked the cars’ real potential.

From the past to the future

An engineer at heart, Ferdinand Porsche started with an electric car at the end of the 19th century. He later dipped his feet in hybrid propulsion, before going ahead and gaining mastery of the internal combustion engine. From this perspective, the development of the Taycan feels like a homage to the company’s roots, and this is a big reason why Porsche is dead serious about the vehicle. In what appears to be a gesture to prove this, the Taycan is being built on the company’s most historic site, and it will be produced alongside the 911, a vehicle that can only be dubbed as the quintessential Porsche.

As I grabbed my travel gear and scurried to the remaining shuttle that was awaiting my presence, I looked back at Porsche’s headquarters one last time. There in the dark sky stood a marvel of orderliness in this ever-changing world. It was a moment that can only to be described as surreal, when the past breathes new life into the future. Seconds later, as I buckled myself down on the shuttle seat and gazed into a disappearing Zuffenhausen site, the sounds of whirring machinery and vehicles rolling off the factory floor can be heard in the distance. Beneath this orchestra of sounds were the rhythmic thumps of heavy equipment that continued to work tirelessly to build Taycan’s upcoming production facilities.

I couldn’t help but imagine that the sounds were representative of the electric heartbeat of a carmaker, coming to life once more.