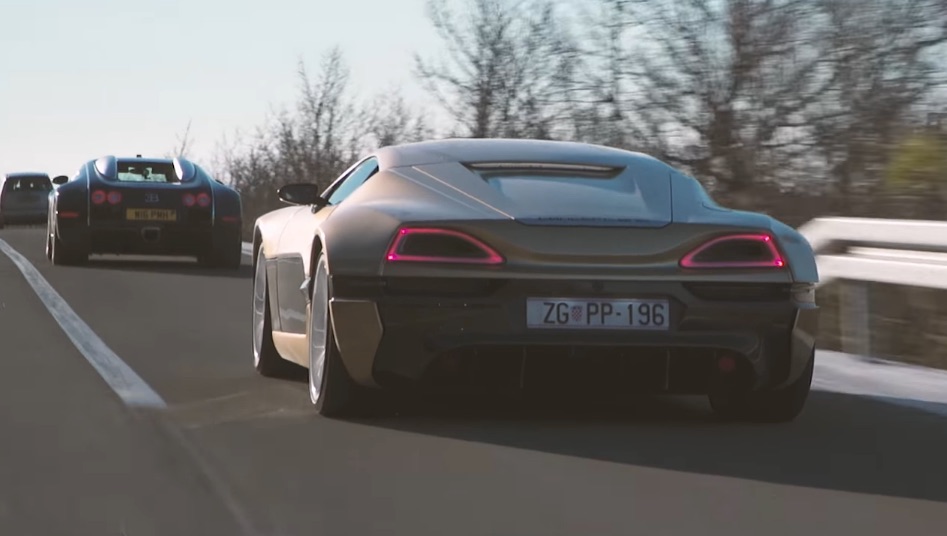 Rimac Automobili founder Mate Rimac recently issued an invitation to England’s Earl of Pembroke to drive the Concept_One ‘head to head’ against his Bugatti Veyron in a battle down the Croatian coast. It would be a match that pits the world’s quickest electric hyper car against the quad turbo beast that has held the title for World’s Fastest Car for more than a decade. To make the duel more interesting, Lord Pembroke was invited to drive the 1088hp Concept_One against his own Veyron which would be driven by Rimac’s founder. Plans eventually call for a drag battle between the two hyper cars, but the first episode in the video series highlights the two cars blasting down Croatia’s Adriatic Coast Road.

The journey first began when Lord Pembroke transported his Veyron to Zagreb, Croatia where the factory for Rimac’s 1088 hp Concept_One is located. Mate Rimac and Lord Pembroke are seen getting accustomed to their respective rides before testing the vehicle’s performance capabilities during their coastal drive. It would be each person’s first time driving their new hyper cars.

“Lord Earl of Pembroke (Wilton Classic & Supercar) is a genuine car guy and great guy overall. After having lots of fun with his Veyron, he was interested in the future – so he came to Croatia to experience it. He also brought his Veyron to compare it head to head. He had the opportunity to try the Concept_One on a racetrack, airfield and the amazing Croatian coast roads. This is the first of a series of videos about his experience.” writes Rimac Automobili on the company’s Facebook page.

Watch as over 2,000 combined horsepower blast through Croatia’s breathtaking coastline.