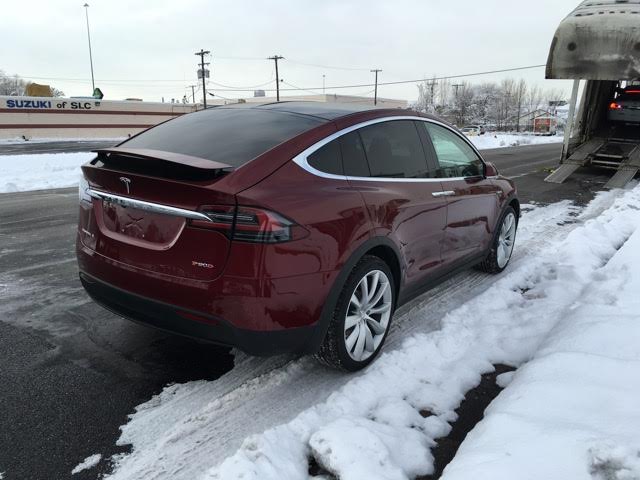 Sightings of Model X cars in shipment are beginning to occur in various parts of the country. Here are photos of one car headed for Florida at a stopover in Salt Lake City taken by a Teslarati tipster. Tesla has begun deliveries of the Model X Signature Series electric crossover to early reservation holders that placed the initial $40,000 deposit, some as far back as three years ago. Christian Staples, whose business is across the street from the Tesla Service Center in Salt Lake City, spotted a truck full of new Teslas being unloaded. According to Christian, he approached the Service Center as he normally does when new Teslas arrive, only to notice that one of them had a different paint color. It was a rare Signature Red Model X being unloaded from the truck. The car was quickly surrounded by Tesla employees who told Christian that the Model X was being temporarily rolled off the truck in order to make room for the truck full of Model S to be unloaded.

Christian a Model X reservation holder himself (#18557) was told by Tesla employees that the Signature X was making its way to an owner in Florida, and currently in “factory mode” meaning it was limited to a maximum of 10 mph with only the driver’s door being operational.

When questioning the Tesla employees about the popularity of the Model X, they further mentioned that the Model X is outselling the Model S by 3 to 1 in the Northwest region including Utah, though Utah had 40 Model X orders pending with 12 of them already configured. Expectant Tesla owners are normally contacted by the company about one week before their car is ready to be delivered. Many are expecting calls this week, but so far few such calls have been received. Two members have posted on the TMC forum in the past few days that they have been contacted by Tesla and expect their cars before the end of the year.

Updated December 17, 2015 9:25pm – Signature #2 holder Bonnie Norman announces via Twitter that her Signature Model X will be available for pickup this coming weekend.

Another owner recently took delivery of his Signature Model X at the Syosset, NY Tesla Service Center and posted a photo of it on Plugshare. Model X Panoramic Windshield as seen looking in from the driver’s side door [Source: Christian Staples via tips@teslarati.com]

Tesla delivered a handful of Founders Series Model X during the unveil event back in September. Mark Templeton, former CEO of Citrix was one of them that took delivery of #00003 who recently shared his impressions of the Model X.

“It’s a sports car, a sedan, and an SUV. The multi-purpose aspect of the X is stunning. The storage space is amazing. In fact, the deep trunk allows two of the 34″ rolling luggage pieces to stand side-by-side! Add the folding third row — it far exceeds SUVs of similar size. The underseat space is great – more comfortable for passengers and added space for storage. The seats are by far the best of any vehicle I’ve owned – design, comfort and function. And, I love how the middle row sets tilt and slide.”

Templeton raves about the performance of his cobalt blue Model X. “As Elon said, it’s FAST! Ludicrous mode makes acceleration from 30 mph just like at 0 mph! Smooth, continuous, multi-G acceleration – pure joy at the tip of your foot!” The one word of caution he has for any new Model X owner is to be prepared for how much attention the car generates. According to Templeton, the Model X will draw a crowd everywhere it goes.