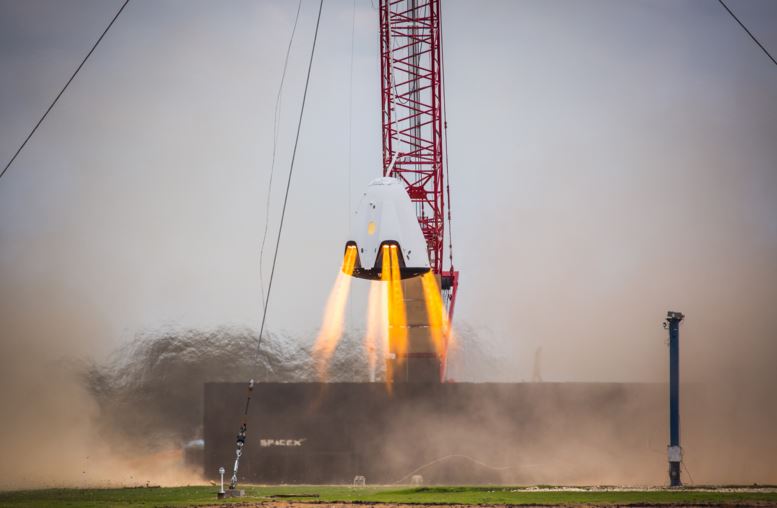 SpaceX is working on a landing system that will use rockets instead of parachutes to return capsules to earth. It has conducted several successful tests. The capsule that transports humans into space typically uses parachutes to land them back to earth safely. SpaceX has a better idea. Instead of parachutes, it wants to use the SuperDraco rocket engines that are mounted in four pairs to the outside of the Crew Dragon capsule to control its descent back to earth at the end of a mission.

The SuperDraco engines were originally developed to provide an emergency escape capability for the Crew Dragon Capsule, which can transport up to 4 people to the International Space Station and back. Normally, the SuperDraco rockets just go along for the ride, ready to be activated if the capsule needs to be whisked out of danger. Combined, they create 120,000 lb of thrust — enough to accelerate the capsule to 100 mph in a tick over 1 second.

In the event of an emergency, the SuperDraco rockets can lift the capsule off the launch pad or away from a malfunctioning rocket in seconds, protecting the crew members inside from danger. The 3D printed engines use hypergolic propellants that ignite instantly when they come into contact with each other. The rockets have been test fired successfully 27 times at the SpaceX research facility in McGregor, Texas.

After SpaceX engineers got the idea to use the rockets to return the capsule safely to earth, they conducted several tethered tests of the landing system to calibrate the control software. They believe their system can land the capsule with the precision of a helicopter. As the system is still experimental, return trips from the ISS will continue to make a splashdown in the ocean for the foreseeable future. After the development cycle is completed, SpaceX will continue evaluating their innovative rocket return system.

In conjunction with NASA, both SpaceX and Boeing are developing new space capsules capable of transporting 4 person to the ISS and back. Prior capsules were limited to no more than 3 passengers. Having an extra person aboard the ISS will significantly increase the number of scientific missions the astronauts can carry out aboard the space station. The goal of the project is to provide safe, reliable and cost effective access to the ISS and other low Earth orbit destinations.