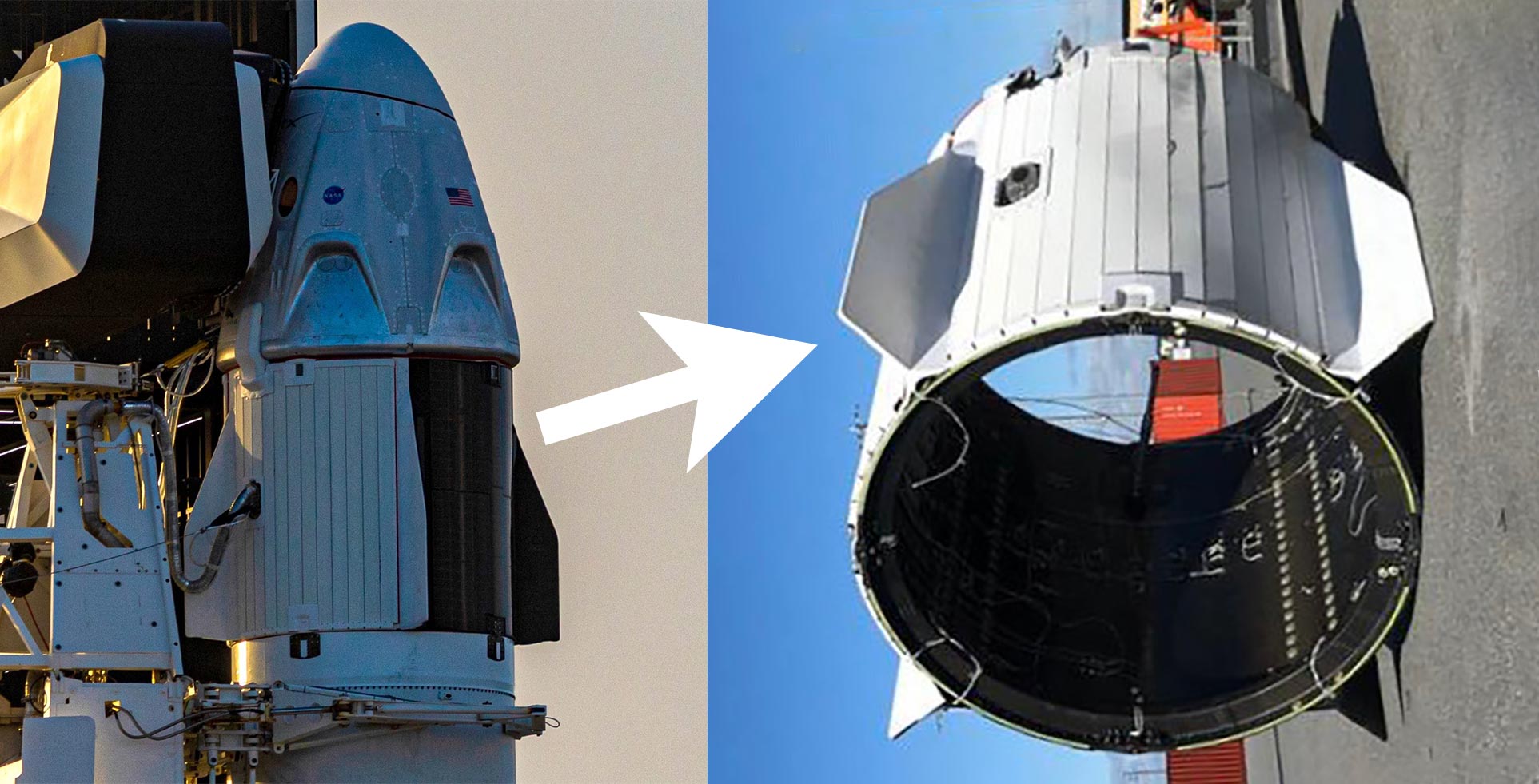 SpaceX surprises after recovering spacecraft 'trunk' in one piece

In a surprise twist, SpaceX has recovered an expendable ‘trunk’ that launched with Crew Dragon on its January 19th In-Flight Abort (IFA) test, in which the spacecraft successfully escaped from an exploding Falcon 9 rocket.

While recovering pieces of Dragon’s disposable trunk would not have been shocking, SpaceX has returned this particular Crew Dragon trunk to shore in a condition that can only be described as unscathed. The surprise came first on the evening of January 19th, when two separate SpaceX ships returned to Port Canaveral — first and foremost bringing Crew Dragon capsule C205 back to dry land for inspection and possible reuse. However, a separate ship – GO Navigator – followed the ship carrying Crew Dragon not long after, revealing a shockingly intact Dragon trunk on its deck.

At 10:30 am EST (15:30 UTC) on January 19th, Falcon 9 booster B1046, an expendable upper stage, and the newest Crew Dragon spacecraft lifted off from Kennedy Space Center (KSC) Launch Complex 39A (Pad 39A) on the spacecraft’s second-ever integrated launch. Designed to push Crew Dragon’s abort systems to their limits, the spacecraft ignited its SuperDraco thrusters around 85 seconds after liftoff, soaring away from a supersonic Falcon 9 and triggering the rocket’s catastrophic (but expected) explosion around 10 seconds later.

A bit like pushing against a wall, Crew Dragon had to fight uphill against a continuous supersonic blast of air to escape the Falcon 9 rocket that launched it, likely adding tens of thousands of pounds (several dozen metric tons) of additional pressure spread out over the top of the capsule. The spacecraft and its detachable trunk section – carrying a solar array, radiators, and four fins – appeared to survive the experience without issue.

The capsule’s SuperDraco engines shut off after about 10 seconds, leaving the integrated spacecraft to coast to an apogee of ~40 km (25 mi), where it finally detached its trunk (pictured above). Designed to be disposable, Crew Dragon features a trunk functionally similar to the one SpaceX has flown almost 20 times on Cargo Dragon (Dragon 1) missions. Crew Dragon’s trunk looks quite a bit different, stretching taller and featuring an interesting conformal solar array (vs. Dragon 1’s deployable panels), as well as radiators (white rectangular panels) the spacecraft needs to maintain thermal equilibrium while in space.

Nominally, Crew Dragon and Cargo Dragon launch on Falcon 9, reach orbit, and go about their business of delivering astronauts and cargo to and from the International Space Station (ISS). After completing their given mission, the trunk section is eventually detached an hour or two before one last reentry burn, eventually returning the spacecraft to Earth. The trunk is thus left in low Earth orbit (LEO), eventually reentering on its own days, weeks, or months later and vaporizing into plasma before it hits Earth’s surface.

While it’s thus surprising that Crew Dragon C205’s trunk section – built primarily out of carbon composites like Falcon 9’s payload fairing and interstage – survived its In-Flight Abort mission more or less intact, the unexpected recovery sadly doesn’t mean that SpaceX has any plans to try to routinely recover or reuse the hardware. If Dragon trunks detached well before orbit, SpaceX might reconsider, but that would defeat their purpose of providing Dragons with power and thermal management while in orbit.

Surviving a terminal-velocity ocean splashdown is certainly no mean feat, but surviving an orbital-velocity atmospheric reentry is magnitudes more challenging, although SpaceX is certainly cognizant of the trade-off. Starship, for example, is expected to include thermal management and power generation systems as an integral part of the (nominally) fully-reusable spaceship and upper stage. At the scale of Crew Dragon, it’s just hard to rationalize doubling or tripling the mass of the spacecraft’s trunk just to tack on a complex recovery system.

All told, both NASA and SpaceX have since indicated that preliminary telemetry from Crew Dragon’s In-Flight Abort test paints an extremely positive picture and effectively confirmed that the test was a total success. With a little luck, it’s safe to say that Crew Dragon will be sacrificing a trunk section in orbit before returning NASA astronauts to Earth just a few months from now.

SpaceX surprises after recovering spacecraft 'trunk' in one piece