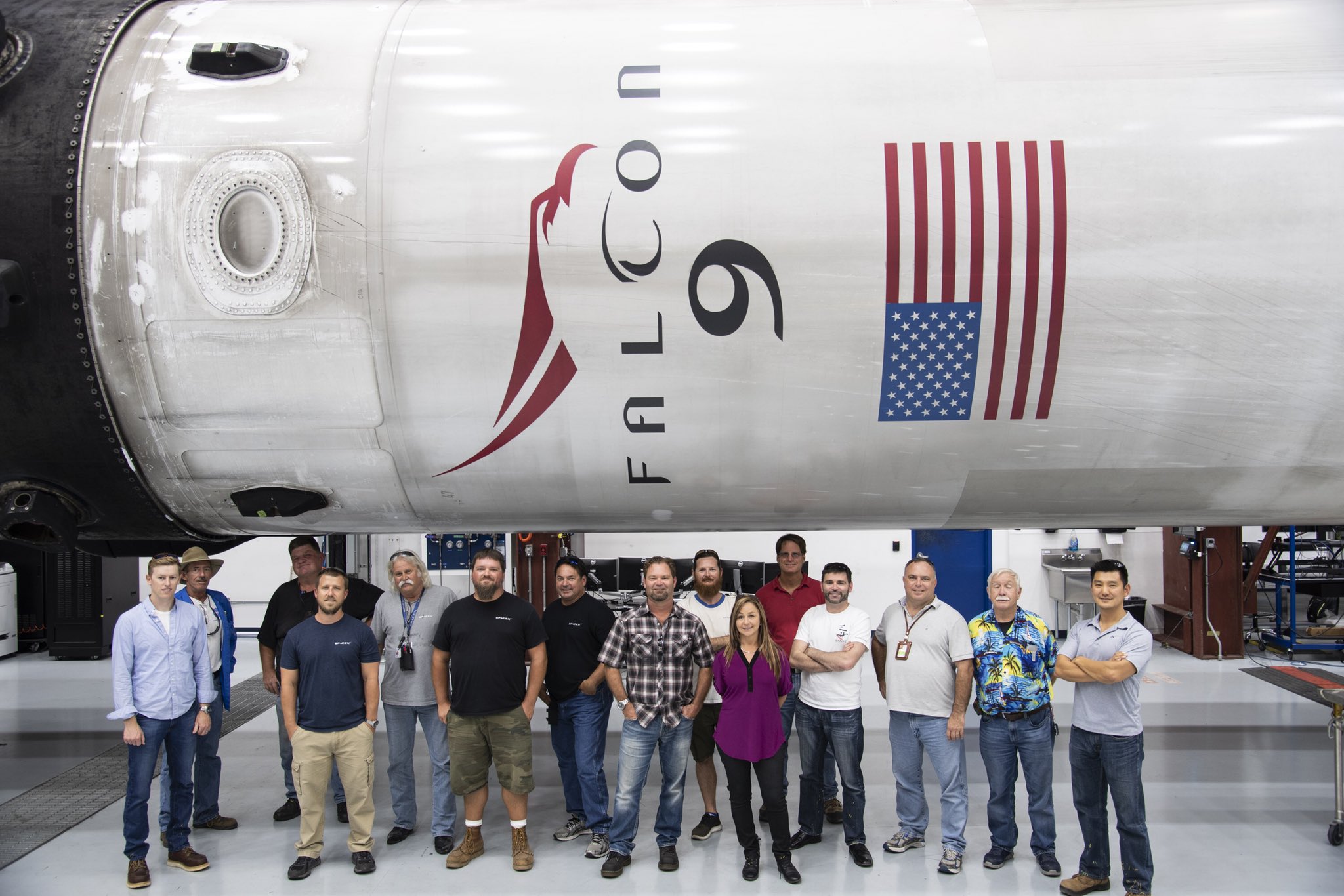 SpaceX's Florida refurbishment technicians stand beneath Falcon 9 B1047.1 while preparing the booster for its second launch. (SpaceX - October 2018)

First reported by NASASpaceflight.com, SpaceX has delayed Falcon 9 B1047.2’s third and final launch due to issues with the booster’s Merlin 1D engines. Fascinatingly, the company has decided to perform an unprecedented second static fire test before going ahead with the launch of Spacecom’s AMOS-17 communications satellite.

As a result, AMOS-17’s nominal August 3rd launch date is now off the table as SpaceX prepares for a second Falcon 9 wet dress rehearsal (WDR) and booster ignition test. Assuming the issue(s) observed after the first static fire test on July 31st are fixed after test #2, scheduled no earlier than Friday, August 2nd, SpaceX will reconfirm Falcon 9’s new AMOS-17 launch date. According to payload manufacturer and launch liaison Boeing, AMOS-17 is now scheduled to lift off no earlier than Monday, August 5th.

In the ~10-year history of Falcon 9, a back-to-back preflight static fire of the same booster is unprecedented. Every SpaceX launch in history has been preceded by an on-pad wet dress rehearsal (WDR) and static fire test. This involves filling the integrated booster and upper stage (and payload, sometimes) to flight-levels with propellant and fluids (RP-1, LOx, helium, nitrogen, TEA/TEB) and performing a launch countdown that is a carbon copy up to the point of liftoff.

Including a brief ignition of the booster’s main engines, this test serves as a full-fidelity rehearsal that helps SpaceX empirically determine whether the rocket and launch pad are ready for flight. Of note, SpaceX’s wealth of integrated systems testing has uncovered hardware and software bugs that can then be fixed without adding any risk to expensive customer payloads.

SpaceX’s workhorse Falcon 9 has scrubbed and delayed pre-launch static fires many, many times in the past but a double-header static fire test with a flight-ready rocket is simply unprecedented. According to SpaceX, the decision to perform a second static fire prior to launching AMOS-17 was made because of a presumably faulty valve or valves associated with the booster’s (B1047) Merlin 1D propulsion, featuring nine semi-identical engines capable of producing more than 7600 kN (1.71m lbf) of thrust.

SpaceX says the questionable valve or valves were replaced less than 24 hours after the first static fire was completed and NASASpaceflight.com reports that the second static fire will occur no earlier than Friday, August 2nd. According to Boeing, a good second static fire will push the launch to NET August 5th, likely featuring a similar ~90-minute window in the late evening (EDT).