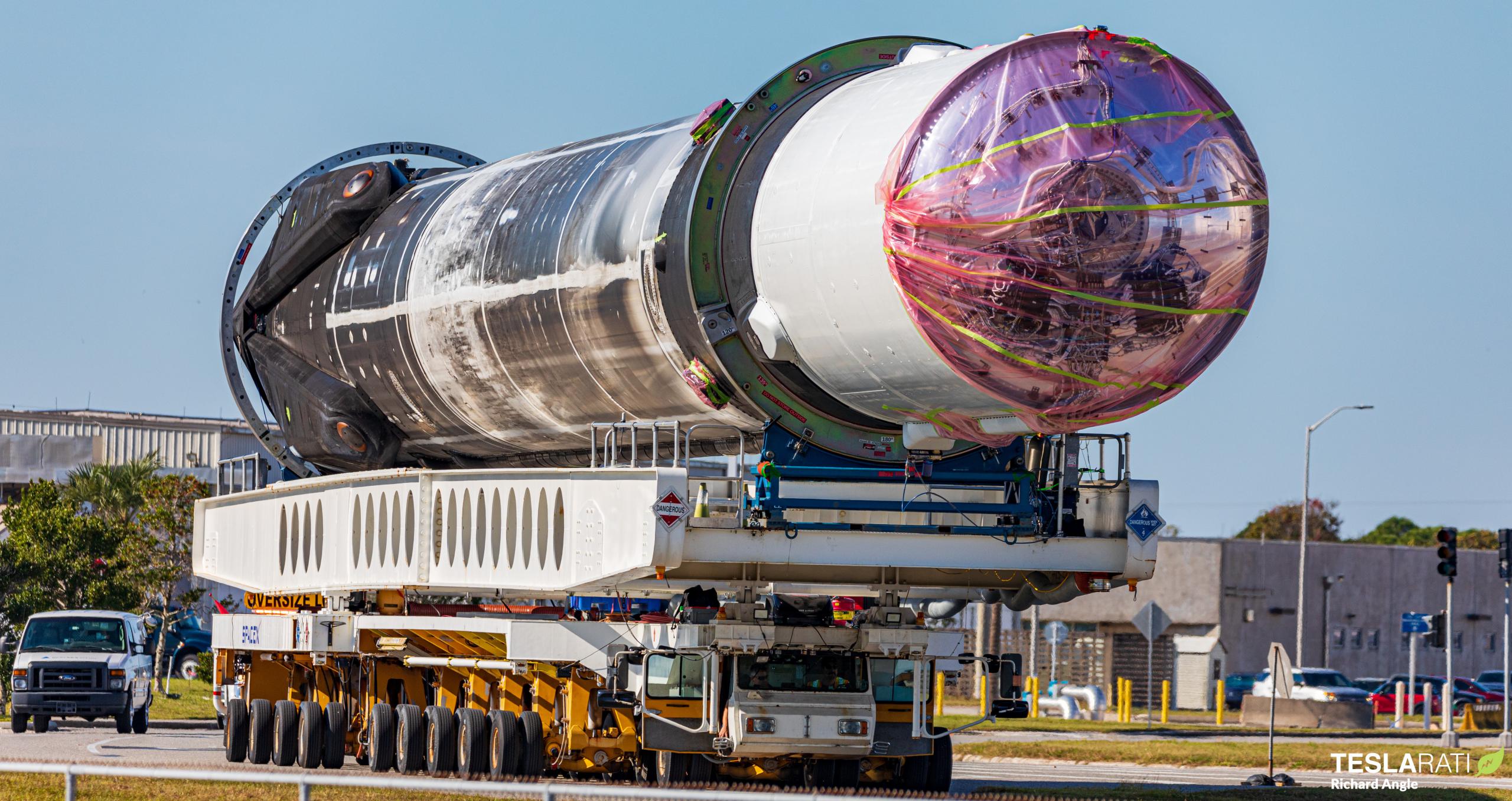 More than two years after the rocket’s last launch, SpaceX appears to have finally decided to give at least one of two surviving Falcon Heavy Block 5 cores a new lease on life as a Falcon 9 booster.

Known as B1052, the Falcon Heavy side core or booster debuted in April 2019 as part of the first flight of the rocket’s Block 5 variant, successfully launching Saudi Arabia’s large Arabsat 6A communications satellite to an almost 90,000 km (56,000 mi) transfer orbit. Following in the footsteps of the first Falcon Heavy, the first Block 5 vehicle repeated its predecessor’s iconic double-landing back at Cape Canaveral. Just 74 days later, both Falcon Heavy Block 5 side boosters B1052 and B1053 launched again, this time supporting the US military’s long-delayed STP-2 rideshare and qualification mission.

Once again, B1052 and B1053 stuck near-simultaneous landings at SpaceX’s Landing Zones. Both missions’ center cores, however, weren’t so lucky. During Arabsat 6A, the first Falcon Heavy Block 5 center core did successfully land but high seas eventually toppled the booster, destroying it and leaving few intact remains. During STP-2, CEO Elon Musk revealed that SpaceX didn’t actually expect to recover the mission’s replacement center core due to the exceptionally hot reentry it would need to survive. As predicted, the center core did not survive, with Musk later reporting that the hot reentry damaged thrust vectoring hardware, causing the rocket to veer off course.

Thankfully, both side boosters aced all four of their collective landings. However, despite previous statements from Musk indicating that Falcon’s new Block 5 design made it fairly easy to convert Falcon first stages between Falcon 9 and Falcon Heavy side booster configurations, both B1052 and B1053 dropped off the face of the Earth immediately after completing STP-2. Only in September 2021, 27 months later, did one of the two cores finally reappear in public – sans landing legs and grid fins but with a nosecone still installed.

As is now clear, that surprise appearance after years in storage was no coincidence. A bit less than three months later after the mystery Falcon Heavy side booster was spotted rolling down a Kennedy Space Center highway from a Cape Canaveral storage hangar to a new SpaceX facility, one of the two side boosters (B1052) was spotted once again – this time with landing legs and a Falcon 9 interstage installed where a nosecone once sat.

Aside from having clearly been converted into a Falcon 9 booster, former Falcon Heavy side booster B1052 was also mated to a new expendable upper stage – a strong indication of an imminent launch. Word on the ground is that the rocket and transporter were on their way to SpaceX’s Cape Canaveral Space Force Station (CCSFS) LC-40 pad for the company’s planned December 18th launch of Turkey’s Turksat 5B communications satellite.

Following SpaceX’s successful NASA IXPE launch on December 9th, the company has two more East Coast launches planned before the end of the year: Turksat 5B NET December 18th and CRS-24 NET December 21st. Several other Falcon 9 boosters (save for B1062, which is probably assigned to CRS-24) are likely available to launch Turksat 5B, so B1052’s assignment – while not implausible – isn’t guaranteed.

Above all else, B1052’s second life as a Falcon 9 is exciting because it means that B1053 probably isn’t far behind it, meaning that SpaceX’s fleet of operational Falcon boosters is about to grow significantly in a short period of time. As of now, that fleet contains eight Falcon 9 boosters that have each completed an average of more than six orbital-class launches. Half have flown nine times. Aside from expanding that fleet by 25%, the reintroduction of B1052 and B1053 will free up SpaceX to retire older boosters like B1049 and B1051, which CEO Elon Musk has said are slower and more expensive to reuse.