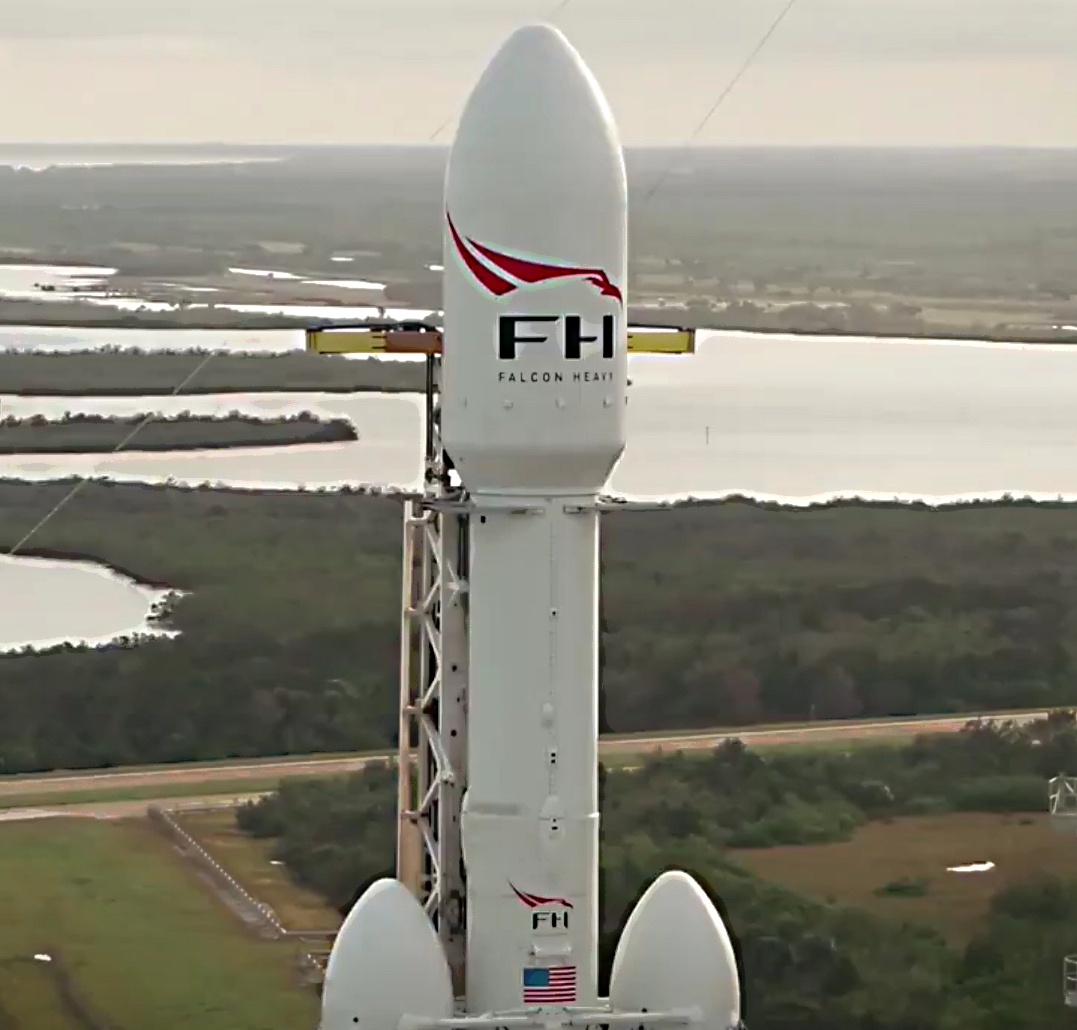 Just a few days after its first-ever rollout to Launch Complex 39A, SpaceX has published its official photos of the historic moment, capturing Falcon Heavy poised and ready at the launch pad that could host its inaugural flight as soon as January 15th.

These photos offer the first glimpses of the complete, integrated Falcon Heavy, now with Elon Musk’s Tesla Roadster payload and second stage attached to the massive rocket. While SpaceX has not yet revealed specific details regarding the Roadster’s actual destination, it can be assumed that Falcon Heavy and its second stage will attempt to place it into an extremely stabled orbit around the sun, with one side close to the orbit of Mars. In this configuration, it’s unlikely that there will be any possibility of in-space photo opportunities with the Tesla and Mars. Musk has confirmed that its orbit will be extremely stable, and Roadster will likely remain in its final space journey for hundreds of millions or even billions of years.

With more than 5 million pounds of thrust at liftoff—equal to approximately eighteen 747 aircraft at full power—Falcon Heavy will be the most powerful operational rocket in the world by a factor of two. https://t.co/NneqPRPr46 pic.twitter.com/oswCUreG6i

While Falcon Heavy’s inaugural launch will apparently see the vehicle operating at only 92% thrust, this performance would still easily catapult the rocket above all other operational launches vehicles by nearly a factor of two.

At a total of 5 million pounds of thrust (22.8 kN), the rocket would be able to lift a fully-fueled 747 passenger jet into low Earth orbit (LEO) in an expendable configuration. Its performance with full recovery of its three first stages is not public, on the other hand, but SpaceX will nevertheless be attempting to recover all first stages alongside the inaugural launch. Approximately 30 seconds before Falcon 9’s usual main engine cut-off (MECO) point, Falcon Heavy’s twin side boosters will separate from the center core (essentially a complete Falcon 9) with the help of some form of mechanical actuators designed to gently push those boosters away from the center.

Quite frankly, the intense aerodynamic forces present at the point of side booster separation mean that it is entirely possible that they may not survive, and could even be drawn back in to impact the center core, an eventuality that would likely bring the mission to a premature end. Typically, rockets with a similar triple booster first stage (Titan IV, Delta IV Heavy) have used relatively powerful separation rockets to more sternly force the side boosters away from the main stage, generally with great success. However, the sort of single-use separation motors would run counter to SpaceX’s primary pursuit of completely reusable rockets.

Risks aside, if all goes well, the side cores will separate and return to the land-based Landing Zone-1 (LZ-1) at Cape Canaveral Air Force Station, and will likely land simultaneously and offer nearby Floridans a double dose of sonic booms as they slow down from speeds well above Mach 3. Meanwhile, the center stage will throttle up and continue on as if it were a Falcon 9. The core stage will finally separate from the second stage and Roadster payload and power back down to Earth to attempt a recovery aboard the drone ship Of Course I Still Love You. Given SpaceX’s previous history of rather exceptional live coverage of both their Falcon 9 launches and landings, fans can expect a truly stunning tour-de-force of a show if the launch goes as planned.

Even then, a failure would still be quite a spectacle and is undeniably a real possibility for any new form or iteration of a rocket. However, it is rather implausible that SpaceX would choose to take unreasonable risks with one of its invaluable launch pads, particularly LC-39A – tasked with supporting SpaceX’s upcoming Commercial Crew demonstration missions no earlier than August 2018. Musk’s hyperbole aside, he can be taken at his word when he in the past commented that the launch would be a spectacle one way or another. The massive vehicle’s first static fire attempt, the final step ahead of launch, is to occur no earlier than January 6th, 2018.

Follow along on Instagram as Teslarati’s launch photographer and correspondent Tom Cross provides behind-the-scenes live coverage of both the launch of Zuma (NET January 5) and the final operations ahead of Falcon Heavy’s first launch.