Likely to be the third orbital-class launch for the booster in question, SpaceX’s next launch – led by primary customer Pasifik Satelit Nusantara (PSN) – has the potential to lay claim to multiple major spaceflight “firsts”, ranging from the first time a twice-flown Falcon 9 has launched on the East Coast to the world’s first attempt to land a commercial spacecraft on another planetary body – the Moon, in this case.

SpaceX has completed the final critical test milestone of the mission’s flight-proven Falcon 9, filling the rocket with propellant and successfully static firing the booster on the evening of February 18th. According to SpaceX, all remains on schedule for a February 21st launch attempt from Cape Canaveral Air Force Station (CCAFS) Launch Complex 40 (LC-40), with liftoff currently targeted for 8:45 pm EDT (01:45 UTC).

If all goes well, the launch of PSN satellite Nusantara Satu (formerly PSN-6; translation: “One Archipelago”) – carrying two copassenger spacecraft – could be an immensely significant moment for commercial spaceflight. Thanks to the support of rideshare provider Spaceflight Industries, those two passengers will be sent to high-energy geostationary orbits long relegated to dedicated launches of extremely large satellites, typically weighing multiple tons. While one could fairly argue that this is not the first time in history that a geostationary rideshare launch has occurred, it is almost certainly the first time that such a mission profile has been attempting for a commercial customer.

We are going to the moon! A 3D engine mount from RUAG Space will be the first 3D printed part on the moon. Our 3D part will support landing and lift off of Lunar Lander from @TeamSpaceIL. Congrats to our incredible engineers! pic.twitter.com/AbFZFD7GPB

In this case, that commercial entity is the Israeli company SpaceIL in support of the world’s first commercially-developed Moon lander, a ~600 kg (1300 lb) spacecraft known as Beresheet (Hebrew for “In the beginning”). Designed by SpaceIL and constructed by Israel Aerospace Industries (IAI), the craft has since been installed atop PSN-6 and encased in Falcon 9’s payload fairing along with one much smaller copassenger, an Air Force Research Laboratory-funded (AFRL) microsat known as “S5”. The latter spacecraft weighs roughly 60 kg (130 lb) and is an experiment designed to determine whether small satellites can be used in geostationary orbit (GEO), with S5 focusing on cataloging and tracking GEOsats. 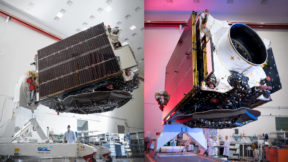 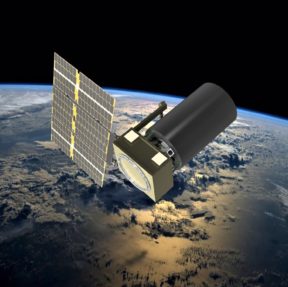 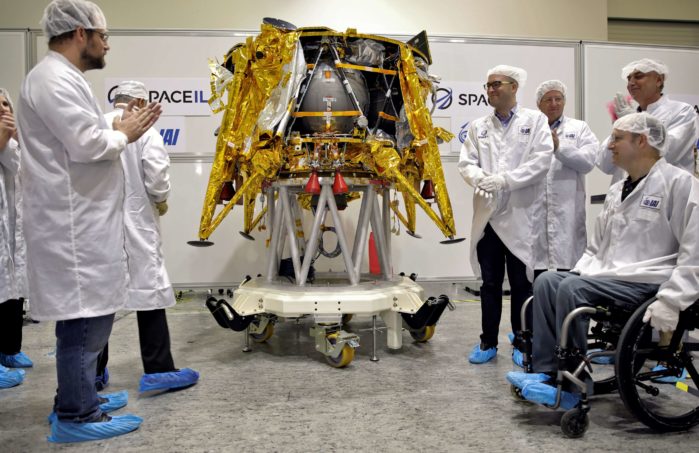 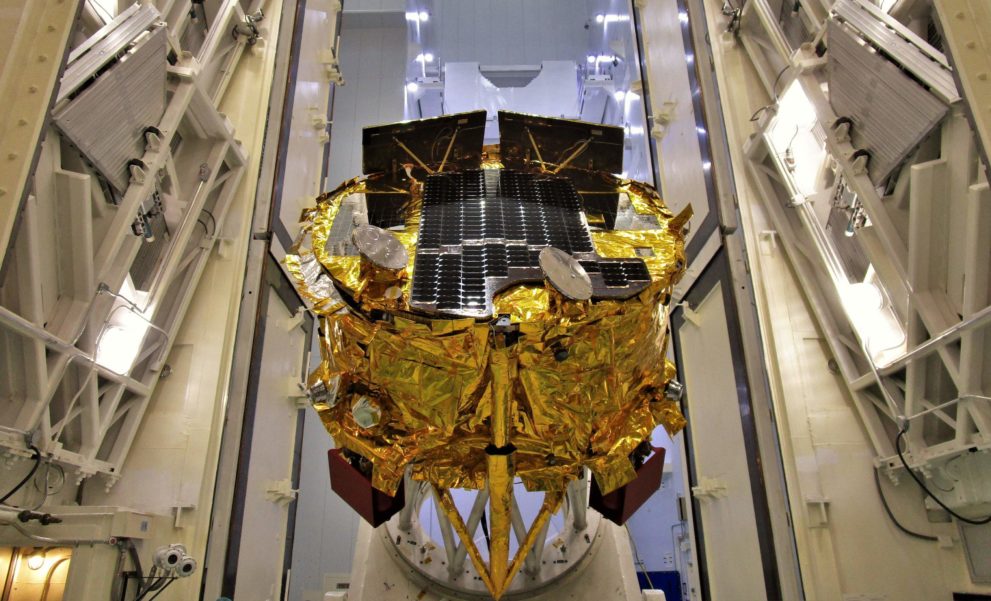 After arriving in Florida, Spaceflight was tasked with integrating Beresheet with PSN-6. (SpaceIL/Spaceflight)

Shepherded by rideshare industry leader Spaceflight, the PSN-6 rideshare – known by the company as GTO-1 – has the potential to open up a new and highly useful realm of spaceflight previously all but closed off to customers lacking tens of millions of dollars for launch costs. While it’s unclear how exactly Spaceflight worked with SSL and/or PSN to make it happen, the mission profile and its potential are both fascinating and complex.

“What we’re doing with [GTO-1] is really cool, cause this is a type of mission that hasn’t really been available [commercially] in the past – taking a ride all the way to GEO and then separating in GEO as an independent spacecraft . . . We’re really excited about testing the market and proving – really, making – a new market here with the GEO [and GTO] rideshare.” – Ryan Olcott, Spaceflight (Jan. 2019)

In a late-January interview with Spaceflight’s Mission Director Ryan Olcott, the senior manager was audibly excited about the future potential of Spaceflight’s new GTO (and GEO) offerings and the many ways that they could change the game for a number of companies and startups with far smaller but no less capable spacecraft. Including startups Astranis and Terran Orbital and industry stalwart SSL, interest in small geostationary satellites has never been higher, and a number of pathfinder missions in 2020 and 2021 – if successful or at least promising – could mark a paradigm shift for the geostationary satellite communications industry as a whole. Often sized perfectly (100-500 kg) for a handful of in-development smallsat launch vehicles like Relativity’s Terran, Firefly’s Beta, and ABL Space’s RS-1, it will likely be several years before those new rockets are capable of reliably supporting these much smaller launches, leaving rideshare missions as the only real route for interested customers until the early to mid 2020s. 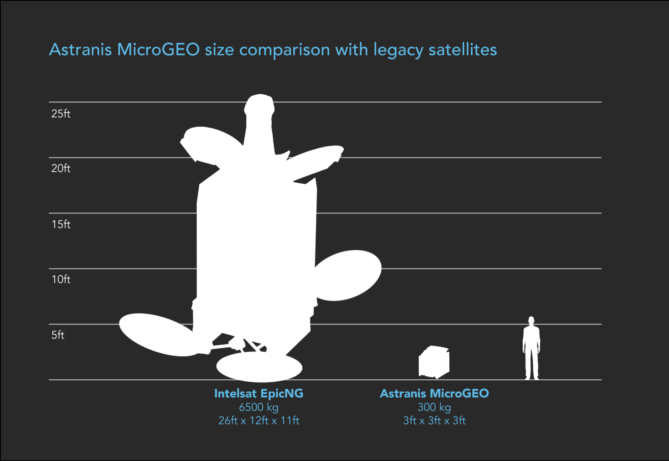 Astranis’ “MicroGEO” offering compared beside one of the largest geostationary satellite buses. (Astranis) 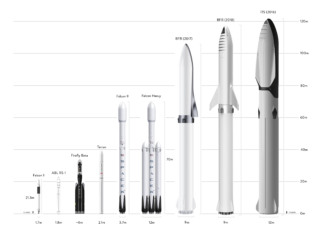 The change in scale between ITS, BFR, and BFR 2018 is significant. (Teslarati) 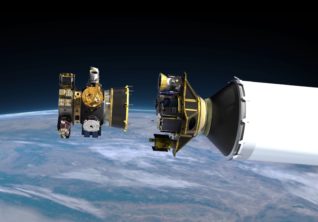 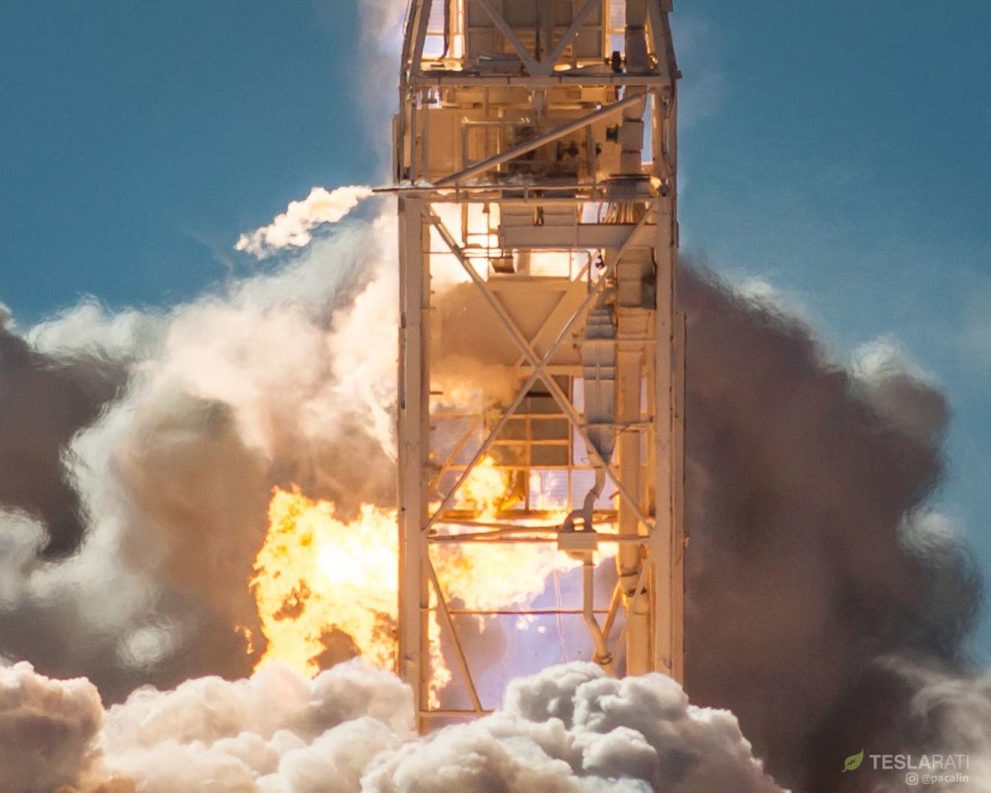 Falcon 9 B1046 lifts off for the third time with Spaceflight’s SSO-A rideshare mission. (Pauline Acalin)

In the process of undertaking this milestone geostationary rideshare, Spaceflight had to design, build, and test custom hardware needed to protect the AFRL’s S5 spacecraft on its multi-week ridealong from geostationary transfer orbit to PSN-6’s geostationary orbit destination, as well as unique mounting hardware needed to load SpaceIL’s Beresheet spacecraft atop the main satellite host. In fact, GTO-1’s mission profile is impressively complex, requiring multiple mission-specific maneuvers and separation events to detach Beresheet shortly after the entourage separates from Falcon 9, carry S5 to a geostationary graveyard orbit (GEO + ~300 km) to separate Spaceflight’s custom hardware, return to a lower orbit to deploy the Air Force satellite, and finally insert PSN-6 into its final operational orbit.

“We actually have to open up our adapter system to allow the [AFRL S5] spacecraft to come out, so we have about a half-day time window that we’re aiming for where we will separate the top off of our cone adapter system and then drop [the orbit] back down a little bit [because we can’t drop that junk off in GEO – you have to use the GEO graveyard slot].” – Ryan Olcott, Spaceflight

“GTO is pretty cool because you can do all sorts of positive C3 missions [to] Lagrange points or just about [anywhere] in the solar system you want to go to … With SpaceIL, potentially in the future [Spaceflight will also] be able to partner with them to bring things to the Moon if they’ve got customers that want to bring payloads to the Moon.” – Ryan Olcott, Spaceflight

The fact that the first primary passenger (by weight) of GTO-1 is a mission as groundbreaking as the commercial Beresheet Moon lander is also by no means a coincidence according to Ostello, a feeling that was rapidly backed up by an agreement between IAI and European company OHB to potentially use Beresheet-derived landers to deliver European payloads to the Moon. Ostello expressed a similar interest and optimism a few weeks prior to that announcement. While not directly involving Spaceflight, the fact that IAI (Beresheet’s manufacturer) is interested in producing more landers for other customers essentially opens the door for Spaceflight or other commercial or governmental entities to purchase future landers for customer payloads or arrange their launch to the Moon.

Set to launch on an unspecified Falcon 9, process of elimination (i.e. which boosters are in Florida) implies that PSN-6/GTO-1 will feature either Falcon 9 booster B1047 or B1048, two flight-proven boosters with no know missions assigned that are also known to be in Cape Canaveral. B1047 last launched the Es’hail-2 satellite in mid-November, while B1048 completed its second launch (from California) in early October before shipping to Florida for unknown reasons. With B1048 situated in 39A’s hangar, the lack of any reports of a booster moving from 39A to 40 suggest that B1047 was the Falcon 9 that successfully conducted its third on-pad static fire last night.

Shortly after launch, the Falcon 9 booster will make its way to drone ship Of Course I Still Love You (OCISLY) – located ~650 km (400 mi) off the coast of Florida – for what will be the second time ever that SpaceX has successfully launched and landed the same Falcon 9 booster three times, following on the heels of B1046’s third launch last December. SpaceX fairing recovery vessel Mr. Steven also arrived at Port Canaveral last week after a nearly 8000 km (5000 mi) journey from Port of Los Angeles, raising the possibility of his first attempt at a fairing catch on the East Coast.