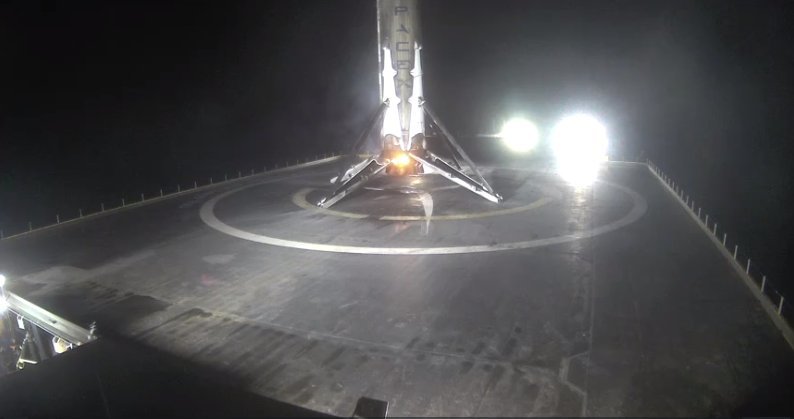 SpaceX has successfully landed its sixth Falcon 9 rocket early Sunday morning after taking off from Florida’s Cape Canaveral Air Force Station on a mission to deploy a Japanese JCSAT-16 communications satellite into geosynchronous orbit. Falcon 9’s first stage rocket returned back to earth to score a precise landing on the Of Course I Still Love You floating drone ship stationed a few hundred miles off the Florida coast.

Once the JCSAT-16 is positioned in orbit, the satellite will travel at the same speed as the earth keeping it stationary at a fixed point above the earth’s surface. The level of difficulty to achieve such a mission goes beyond just placing something into orbit. Placing a satellite into a transfer orbit requires lifting it 20,000 miles above the earth. By contrast, a mission to the International Space Station only needs to climb 300 miles above the earth. Being able to travel 20,000 miles means the rocket burns a lot more fuel, leaving little left over to operate its engines in descent mode.

SpaceX now has a total of five rockets that have been recovered for re-use though the company has not re-used any to date. CEO Elon Musk expects the first “reflight” to take place later this year.

SpaceX president Gwynne Shotwell says re-using rockets allows the company to reduce its rocket manufacturing costs by 30%. SpaceX is first and foremost a for profit business enterprise. Reducing costs is key to making money on every launch, which allows it to out bid its competitors and attract more business.

The first recovery at sea was a historic milestone, but SpaceX’s great success rate in subsequent landing have made the feat of landing a Falcon 9 look routine.