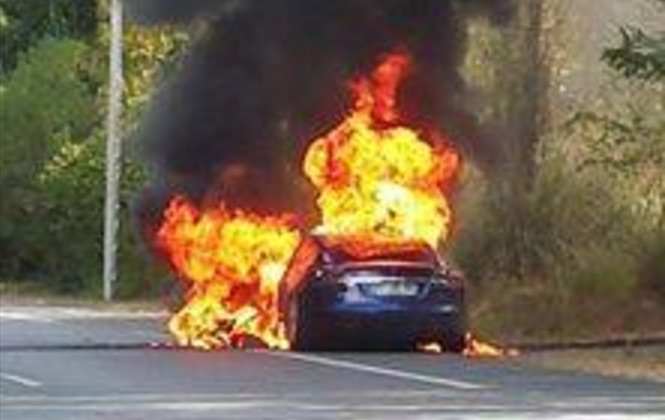 According to redditor 3dkSdkvDskReddit, a Model S 90D carrying a couple along with a Tesla employee – common practice when scheduling for a Tesla test drive – departed from Biarritz, France before the driver was alerted with a visual warning message, “Problems with charging”. The driver pulled over to the side of the road and shortly after the Model S ignited into flames.

“In France (Biarritz) a brand new Model S 90 catched fire during a test drive. There were 3 people in the car (a couple + Tesla employee) and they suddenly heared a loud noise (not an explosion). The car gave a message “Problems with charging” (while they were driving) so they pulled over. 1 minute later the car was in fire and this picture was taken. Fire brigade arrived and no one was hurt.”

We reached out to Tesla for commentary and will update this story as we learn more.

Updated 10:35am PT: A video surfaces on Twitter showing the aftermath of the Model S fire in Biarritz.

“We are working with the authorities to establish the facts of the incident and offer our full cooperation. The passengers are all unharmed. They were able to safely exit the vehicle before the incident occurred.”

We’re learning more from sources that all occupants of the Model S were asked to walk out of the vehicle by the Tesla employee who was onboard chaperoning the test drive. Everyone exited the vehicle safely.

Smoke would begin to appear from the right side of the Model S 90D just a short minute later before ultimately catching fire. By the time firefighters arrived on the scene, the Model S was nearly completely destroyed.

Friend to the husband and wife couple taking the test drive in the Model S 90D was asked to share their story to others. The source posted the couple’s account of what happened (in French) to Tesla Club France. Through French translation we learn that despite the shocking turn of events, the couple were elated after Tesla came to pick them up in a Model X.