SpaceX to build small version of BFR’s spaceship for use on Falcon 9, says Elon Musk

SpaceX CEO Elon Musk has taken to Twitter to announce a new development program: in order to gain experience with the new design and recovery strategy, SpaceX engineers and technicians will apparently build a miniature version of BFR’s winged spaceship able to launch atop Falcon 9 or Falcon Heavy.

According to Musk, the company aims to conduct the first orbital flight of this mini-BFS as early as June 2019, just eight months away.

Mod to SpaceX tech tree build: Falcon 9 second stage will be upgraded to be like a mini-BFR Ship

Described as a “SpaceX tech tree build”, Musk seems to be implying that the strategic purpose of this new development is to act as a stepping stone between Falcon 9 and BFR, two dramatically different launch vehicles relying on a variety of entirely distinct technologies. Based on the fact that Musk believes the mini-BFS could reach orbit as early as June 2019, it seems likely that the miniature spaceship will essentially just be a strengthened Falcon 9 upper stage with fins and a heat shield attached versus a more extreme departure, where the stage would literally be a mini-BFS.

In the latter scenario, SpaceX could use the opportunity to extensively test – albeit on a smaller scale – a number of immature BFR technologies, including all-composite propellant tanks, autogenous pressurization, a sea level-optimized rocket engine on an orbital upper stage, methane and oxygen (methalox) propellant, actuatable tripod fins, new heat shield materials, and more. If SpaceX has been working on this for several months, there is still a chance that those technologies will be tested on this step-change Falcon 9 S2 variant, but it seems improbable that Musk would have been able to stay totally silent on the plans during his September 2018 update to the BFR program. 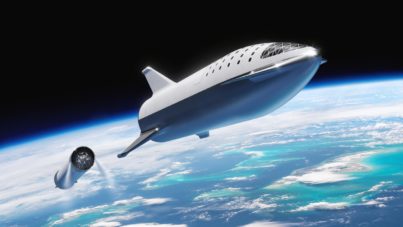 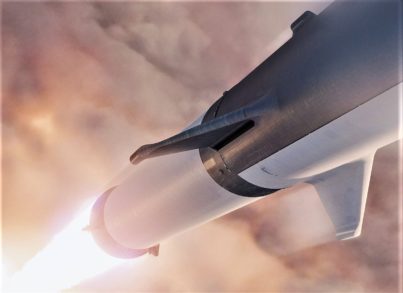 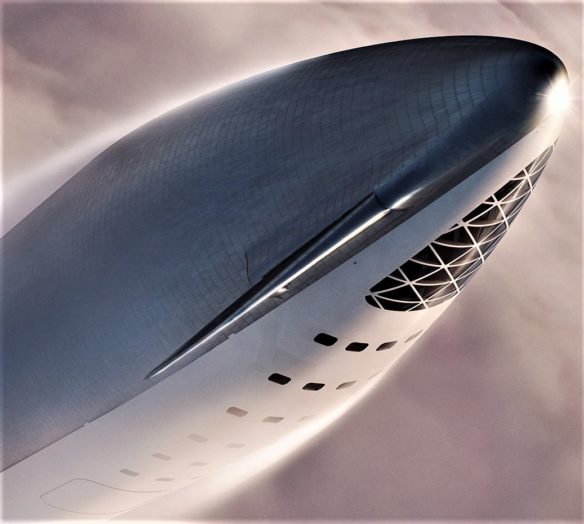 Going off of what little information we have, it seems more likely that the “mini-BFR ship” described by Musk is an effort to realize Falcon 9 upper stage recovery and test BFR’s orbital spaceship recovery strategies than it is an extensive development platform for all critical BFR technologies. Prior to today’s tweet, Musk announced early this year (April, to be precise) that SpaceX would attempt to recovery Falcon 9’s upper stage with a “giant…balloon”, or an inflatable decelerator to use the technical terminology.

Given this new development, it’s unclear if those plans are still on – as a small spaceship, Falcon 9’s upper stage would likely be able to reenter Earth’s atmosphere without the need for something like a single-use inflatable decelerator, which would have always been a suboptimal crutch for the recovery of any orbital spacecraft, be it Falcon 9 or BFR. With this new plan, it appears that SpaceX wants to kill at least two birds with one stone, building a platform capable of flight-testing a handful of new technologies critical to BFR’s success while also potentially realizing the dream of a fully-reusable Falcon 9.

Given recent reports from Reuters that Musk has demanded that SpaceX’s Starlink team work towards the first launch of an operational batch of satellites by mid-2019, his target date for a mini-BFS Falcon 9 upper stage is likely no coincidence. Given the potential risk of being the first to launch on an unproven variant of Falcon 9, it’s possible (if not probable) that SpaceX will conduct its own launch of the rocket prior to flying paying customers – a perfect way to avoid wasting that launch would be risking a few of SpaceX’s own Starlink satellites in place of a customer’s payload.

Won’t land propulsively for those reasons. Ultra light heat shield & high Mach control surfaces are what we can’t test well without orbital entry. I think we have a handle on propulsive landings.

Musk seems to be confident that SpaceX has effectively ‘solved’ propulsive rocket landings, stating that the purpose of this new variant will be dedicated to testing an “ultra light heat shield and high Mach control surfaces”. Judging from a number of recent job postings focused on new thermal protection systems (and affixing them to composite structures) and an official request for information (RFI) from NASA Ames about its lightweight TUFROC heat shield material, this is a major focus and one of several critical paths for BFR development.

SpaceX to build small version of BFR’s spaceship for use on Falcon 9, says Elon Musk