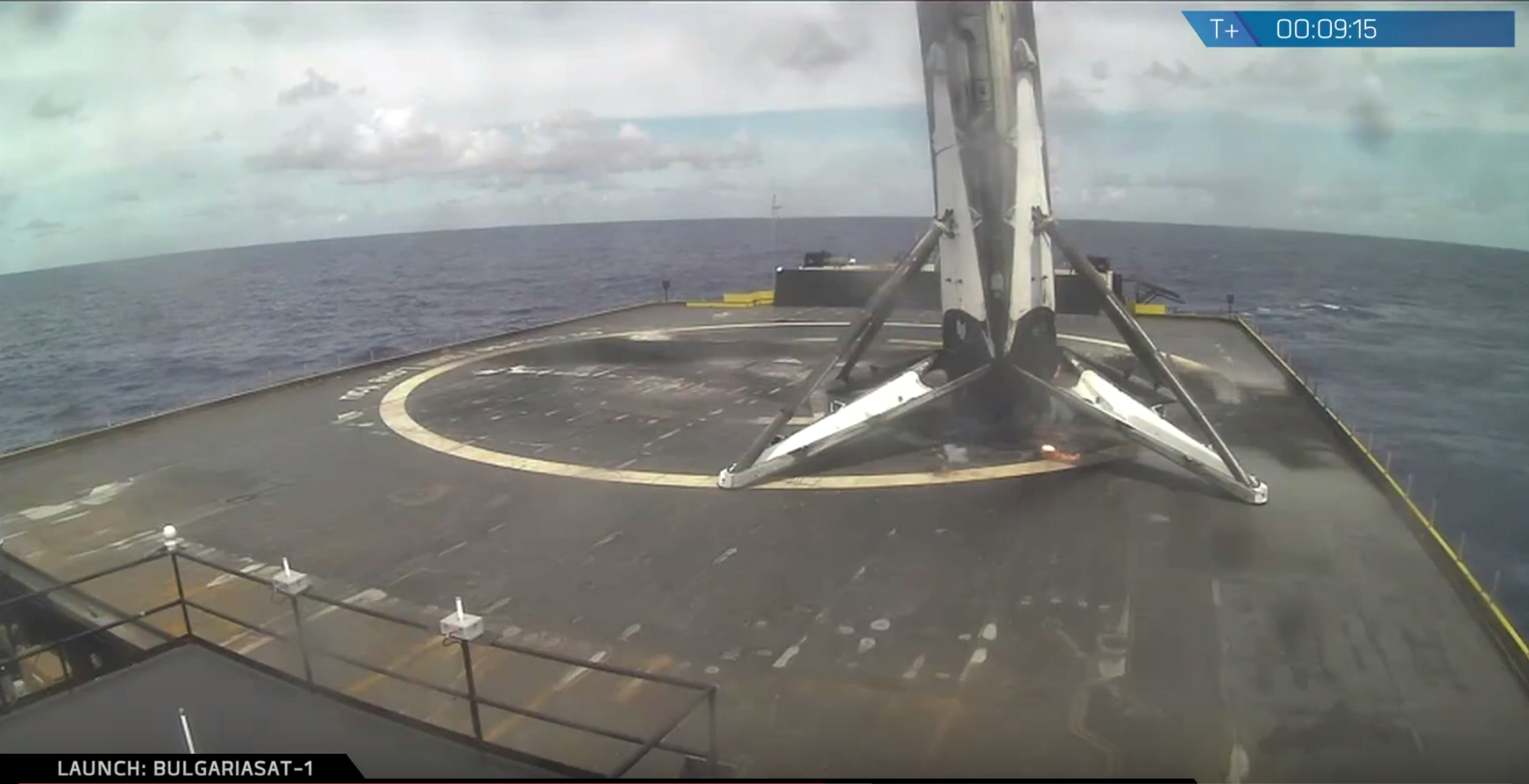 Another successful recovery for 1029! Note the dramatic lean and differing angles of the legs on the left, courtesy of a very hard landing. (SpaceX)

BulgariaSat-1 payload is healthy and in a good parking orbit

SpaceX has successfully conducted its eighth launch of 2017 and the second successful reuse of an orbital class rocket ever. BulgariaSat-1 is currently attached to the second stage and is coasting in orbit in preparation for one more burn of the second stage engine before being deployed.

After previously revealing that this recovery would be the most trying attempt yet for the Falcon 9’s first stage, Musk has now confirmed what most of fans already surmised from the live coverage. Core 1029 has successfully been recovered once again, albeit in a very toasty form, and after a very hard landing that used almost all of the shock absorption within the stage’s landing legs. Aside from now being a leaning tower of rocket, Musk has said that the stage is fine condition. SpaceX has successfully reused a first stage for the second time.

In fact, given that BulgariaSat-1 weighed a relatively small 3,700 kilograms, it is very likely that this extra brutal recovery was effectively a live test conducted by SpaceX in order to gauge the upper bounds of what missions can attempt recovery. It makes sense that this was conducted with a first stage that had already flown successfully, as the value lost from destroying that core during a test would be significantly less than losing a “new” core. Regardless, it would appear that the test was quite successful and the data gathered will likely assist SpaceX in the future.

This launch makes the BulgariaSat-1 mission SpaceX’s second ever successful commercial reuse of an orbital vehicle, and leaves the company with two first stages that have now been both launched and recovered twice. With the successful reuse of a Dragon capsule having occurred just over two weeks ago, it is truly an auspicious year for SpaceX in terms of progressing their program of reuse and improving affordable access to space.

Minutes ago, the second stage completed its second burn and BulgariaSat-1 was successfully detached, now ready to begin the process of reaching its final orbit. As is normal for most satellites, it will take several months at least for BulgariaSat-1 to reach its geostationary orbit and operational status, and the team at Bulsatcom will carefully verify that the satellite is functional and behaving as expected during that time. No communications satellite mission is truly done until it is declared operational, but it is safe to say that BulgariaSat-1 has had a nominal journey thus far.

Keep your eyes on Teslarati for SpaceX’s Iridium-2 launch scheduled for this Sunday afternoon, as well as coverage of the recovery of today’s extra toasty first stage.