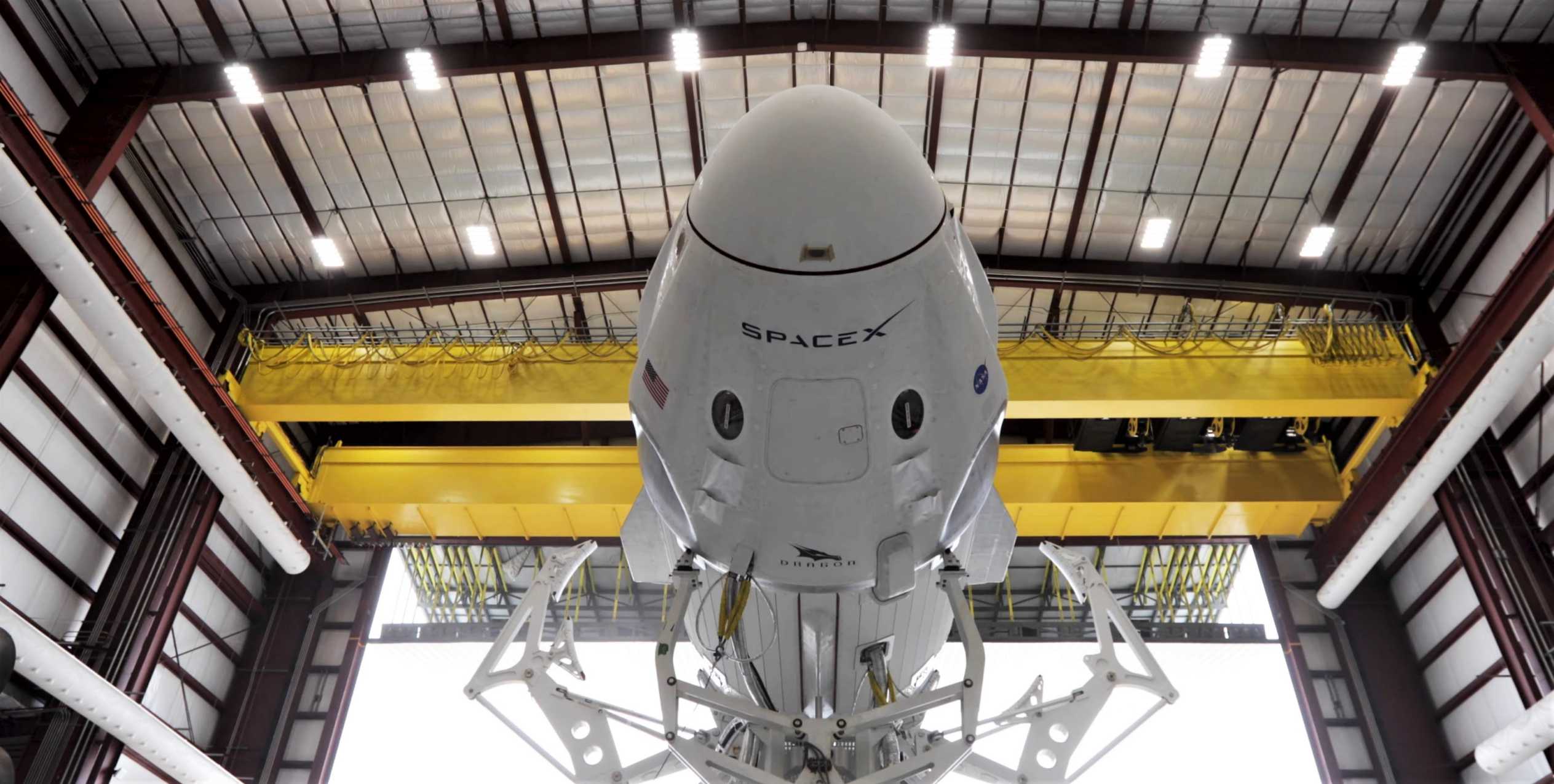 The SpaceX Crew Dragon capsule of the Demonstration 1 Mission in March of 2019 is pictured in a SpaceX hangar prior to rolling to the launchpad ahead of launch. (SpaceX)

With less than a month to go before the historic first crewed flight – and final human rating certification test – of the SpaceX Crew Dragon Demonstration 2 mission, NASA and SpaceX jointly held a full day of pre-mission press conferences on Friday, May 1st. Throughout the day many minor, but crucial, details were revealed.

During the March 18th Starlink launch of a four-time flown Falcon 9 first-stage booster, a brief anomalous engine flare was witnessed during the ascent. Although ultimately successful in the deployment of the stack of 60 satellites, the first-stage booster failed to stick the landing aboard the autonomous spaceport drone ship “Of Course I Still Love You” resulting in a total loss. SpaceX CEO, Elon Musk, responded to comments posted to Twitter confirming the in-flight, early shutdown anomaly of one of the nine Merlin 1D engines.

Musk provided assurance that a thorough investigation would be conducted by SpaceX prior to any return to flight. Musk also noted that the first-ever engine failure of a Merlin 1D engine proved its robustness and the importance of redundancy provided by the other eight engines.

Just prior to the next Starlink mission on April 22nd marking a recycled Falcon 9 booster’s return to flight, Musk once again took to Twitter to provide insight into the early shutdown, in-flight anomaly. Musk stated that a small amount of isopropyl alcohol, used for cleaning the Merlin 1D engines, had been trapped in a sensor dead leg – later clarified as “an area it couldn’t float through” by SpaceX webcast host Lauren Lyons – and was ignited during flight causing the early shutdown of one Merlin 1D engine.

As identified during the April 22nd launch broadcast, out of an abundance of caution SpaceX decided to forgo that cleaning process for the April 22nd mission. However, no information was divulged regarding NASA’s response to either the anomaly or the resolution. Ultimately, the first stage Falcon 9 booster of the Starlink-6 performed flawlessly and even managed to stick the landing aboard the awaiting drone ship.

During Friday’s Commercial Crew and International Space Station overview news conference, a question regarding NASA’s response to the anomaly posed by Jeff Foust – reporter for SpaceNews.com – was directed to NASA’s Commercial Crew Program program manager, Kathy Lueders. She was asked to expand on the final technical constraints remaining prior to the launch of the Crew Dragon DM-2. Lueders responded positively stating that NASA had “reviewed the anomaly resolution…and cleared the engines on our launch vehicle” referring to the Falcon 9 booster slated to support DM-2, noting that the engine-out issue had been satisfactorily resolved and is now behind them.

Early in Friday’s Commercial Crew and International Space Station overview news conference – and later confirmed during remarks made by Lueders – SpaceX Chief Operating Officer, Gwynne Shotwell noted that a final 27th drop test of the Crew Dragon Mk III parachutes was scheduled to be completed later in the day. During a later Q&A interview with the crew of DM-2 – NASA astronauts Bob Behnken and Doug Hurley – Hurley commented that the final drop test had begun, however, he wasn’t quite sure if it had been completed successfully or not.

Just after the closing remarks of the crew Q&A interview, SpaceX announced via social media the successful completion of the 27th and final drop test of the all-important Mk III parachutes.

The confirmation of the successful May 1st drop test and the resolution of the Merlin 1D engine anomaly close out one of the final chapters of prerequisites prior to returning human spaceflight to American soil.