SpaceX has officially announced that it has signed a private customer for what may be the first BFR launch to the Moon, ETA and the individual question currently undetermined.

Included with the announcement was a topical rendering that appears to show an updated BFR spaceship performing a burn of seven Raptor engines (apparently all of sea level variants) around the Moon, confirmed by CEO Elon Musk in a Twitter reply to be indicative of a new version of the next-generation SpaceX rocket.

SpaceX has signed the world’s first private passenger to fly around the Moon aboard our BFR launch vehicle—an important step toward enabling access for everyday people who dream of traveling to space. Find out who’s flying and why on Monday, September 17. pic.twitter.com/64z4rygYhk

Nearly overshadowing SpaceX’s intriguing lunar tourism contract, the photo included with official announcement features a BFR spaceship (BFS for short) that has rather dramatically departed from SpaceX renders of BFR and BFS dating back to late 2017 and early 2018. Most notably, the spaceship’s delta wing has been removed in its entirety, replaced by a triangular layout of three fins and what appear to be forward canards (control surfaces most commonly used to improve aerodynamic stability). Those apparent canards could also potentially act as a sort of stand in to the grid fins present on both BFR and Falcon boosters.

This new render also implies a logical relocation of the ship’s landing legs from external pods to the tips of its new wings, and may even betray some sort of hinge mechanism on the bottom two wins, perhaps meant to allow BFS to safely land on its trio of wingtips while still preserving the inherent aerodynamic stability of BFR 2017’s delta-wing. 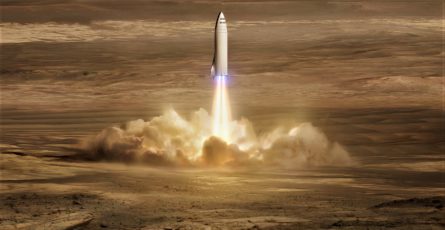 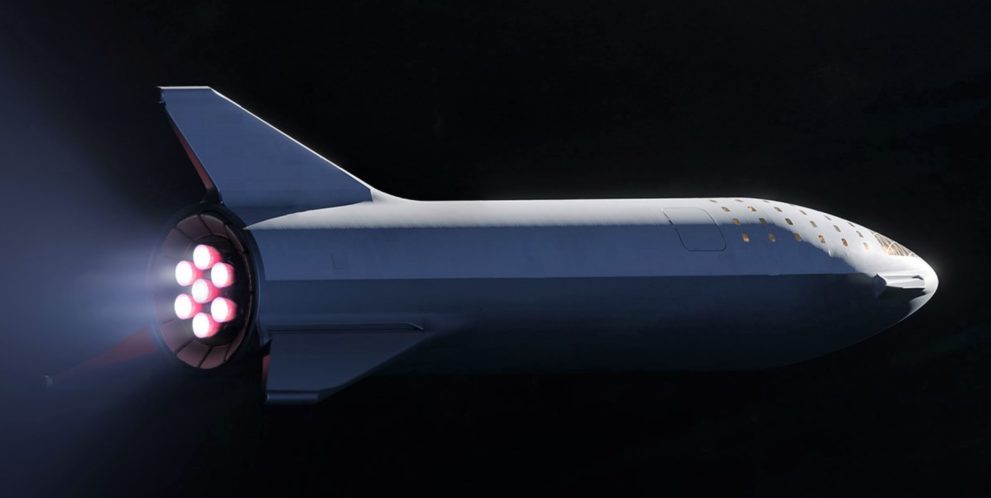 Finally, the most significant change is found at the spaceship’s rear, where a new configuration of seven Raptor engines – by all appearances the version of the engine optimized for sea level performance – is surrounded by a mysterious ring of white or grey panels, perhaps a form of heat-shielding or maybe something else entirely. The lack of vacuum-optimized Raptors is arguably the most surprising feature of this unexpected announcement, either pointing to some sort of brash ‘artistic license’ (less likely given Musk’s tweet response) or a drastic departure from traditional rocket design, doing away with expanded vacuum nozzles for some more exotic solution.

Musk also cryptically responded to a Tweet implying he was probably the mystery passenger, posting a Japanese flag emoji that strongly points towards Softbank founder and CEO Masayoshi Son as the prime candidate for this (circum?)lunar launch. Through his influential Softbank Vision Fund (SVF), essentially a $100 billion pool of money that is being gradually invested in certain companies and ideas, Masayoshi Son has become a force to be reckoned with in technology industries, and is believed to have invested a staggering $1.5 billion alone in prospective satellite internet constellation OneWeb.

As such, it would be far from surprising if Masayoshi Son – who purchased a ~$120 million Californian mansion in 2013 – has chosen to purchase one (or perhaps the only) seat aboard a circumlunar launch of SpaceX’s BFR booster and spaceship, an appreciable risk of life and limb that could cost on the order of $100 million – plus or minus $50 million – depending on how SpaceX is approaching this development. More likely than not, this proposed BFR launch is a slight modification of an already-planned experimental test flight, one that SpaceX has apparently found ways to partially subsidize thanks to an eccentric private individual or group interested in hitchhiking (at a cost).

Time will tell, and SpaceX is planning a much more detailed announcement – evidenced by a livestream event posted on the company’s website – around 6pm PDT on Monday, September 17th. With a little luck, this could be Elon Musk’s previously mentioned BFR update mixed with an unexpected space tourism launch contract.