Speaking at a Q&A session hosted for a Madrid university’s Master’s of Business Administration students, SpaceX President and COO Gwynne Shotwell talked for nearly an hour about the launch company’s next-generation BFR rocket, the reality of long-term life on Mars, and more, revealing a number of interesting tidbits in the process.

Almost entirely led by questions from the unusually well-informed audience, the graduate students and professors predominately kept the famous SpaceX exec more or less focused on the company’s future, delving into the reasoning behind BFR. Shotwell had only praise for the next-generation launch vehicle, which is targeting initial hop tests in late 2019 and its first full launches as early as 2021, a delay of several months from previous schedule estimates targeting hops in early 2019 and orbit by 2020.

Aside from schedule updates, Shotwell had more still to say about the rocket:

Although she offered some self-deprecating humor on SpaceX’s often-optimistic schedules for future projects, she was for the most part positive about the company’s ultimate aspirations of completing and perfecting BFR, stating without hesitation that “something terrible [would] have to happen at SpaceX for us to not be on our way to Mars and back in 10 years.”

SpaceX’s BFR visualized just before launch at a heavily-upgraded Pad 39A. (SpaceX)

We’re not here just yet, but SpaceX is pushing hard to build BFR and get humanity to Mars as quickly as practicable. (SpaceX) 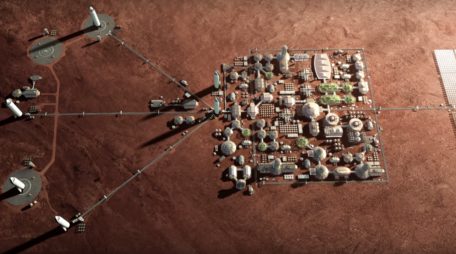 Shotwell acknowledged that some of the hurdles in the way of those goals could become headaches, particularly the decision to build the rocket’s propellant tanks solely out of carbon fiber composites, but also expressed her belief that most of the difficulty of designing and building BFR’s advanced Raptor engine was already behind SpaceX. Roughly two times as powerful as Merlin 1D and dramatically more efficient, SpaceX’s Raptor development team has conducted extensive hot-fire testing (at least 1200 seconds) of the engine, optimizing it to the point that the company is already building (and maybe already hot-fire testing) flight-grade hardware.

Other miscellaneous comments showed Shotwell at her best, ad-libbing one-liners that were lucid, accurate, and entertaining.

Watch the full Shotwell Q&A – graciously recorded by the business student and SpaceX subreddit member LordsofDecay – at the link below.