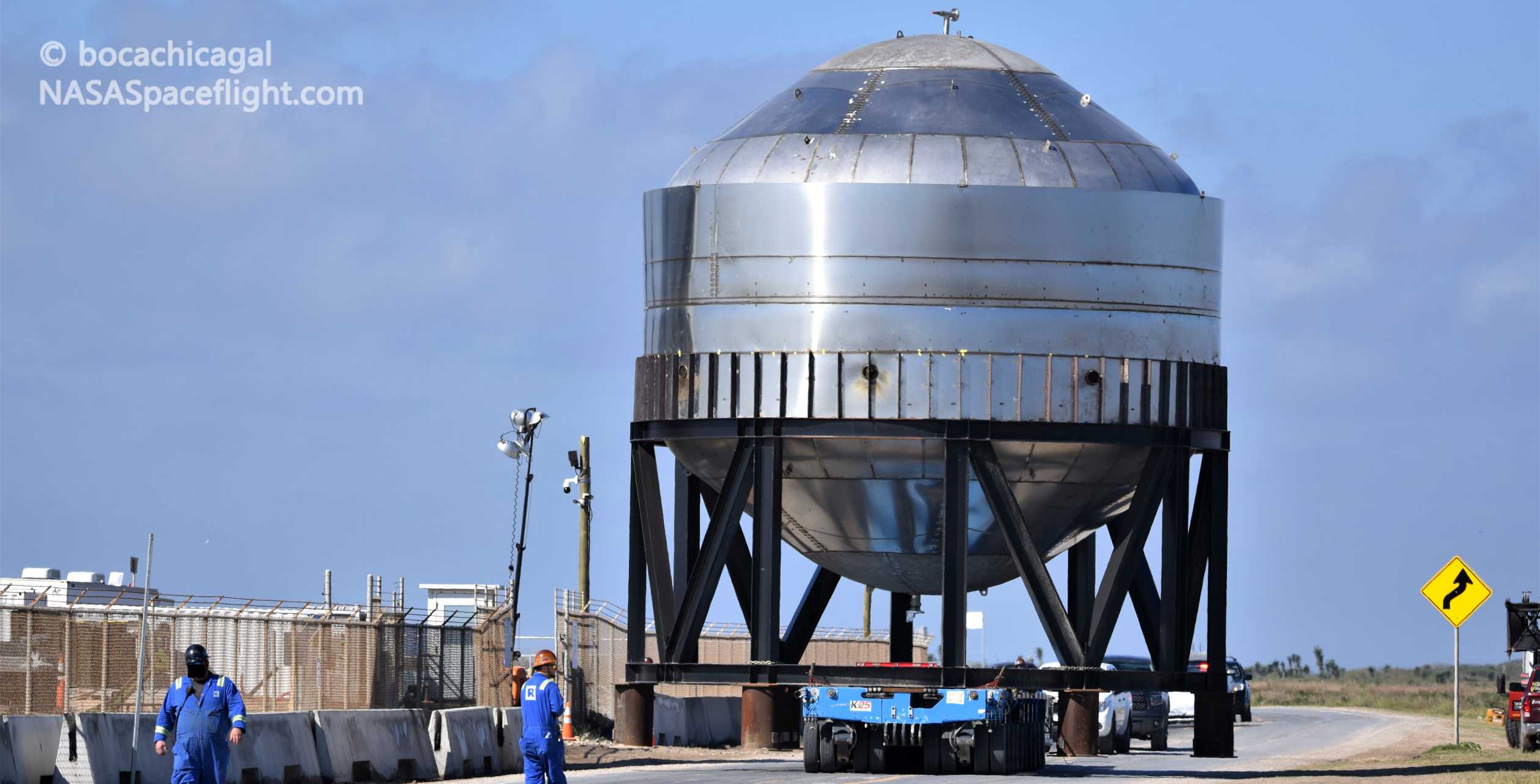 SpaceX has built and tested its second Starship 'test tank' in less than four weeks, a milestone that Elon Musk says has opened the door for the first orbital Starships. (NASASpaceflight - bocachicagal)

After a busy several days of rocket hardware testing, Elon Musk says that SpaceX may be ready to build the first Starship prototype destined for space.

According to Musk, one test in particular – performed in South Texas just yesterday – is an encouraging sign that SpaceX’s Starship team is becoming increasingly competent at building the massive steel parts that will ultimately make up the generation launch vehicle. For SpaceX, the particular skills and expertise needed to precisely and consistently build a launch vehicle – let alone a rocket as large and complex as Starship – are quite a bit different from those it has mastered with Falcon 9, Falcon Heavy, and Dragon.

A lot of the expertise – particularly engineering talent, countless lessons-learned, and insight into reusability – is directly transferable from Falcon rockets to SpaceX’s Starship/Super Heavy program. Where it really isn’t transferable, however, is in the methods required to actually build the steel subcomponents that must ultimately be assembled together to form the rocket’s upper stage and booster. As a result, SpaceX has spent more than a year focused on building, testing, scrapping, improving, and re-testing any number of critical Starship components. Over the last four weeks (and last few days in particular), that testing has come to a head and Elon Musk believes the results have opened the door for SpaceX to begin building its first space-bound Starship prototypes.

SpaceX’s latest round of full-scale Starship hardware tests began just 10-20 days ago, depending on how one counts. Back around the start of the new calendar year, SpaceX began rapidly integrating two new Starship bulkheads and two cylindrical steel rings (barrel sections), ultimately delivering a finished ‘test tank’ after just 20 days of work. On January 10th, scarcely 24 hours after the two halves of the test tank were welded together, SpaceX sent the Starship test tank to its nearby launch pad and pressurized it with water until it quite literally burst.

Musk tweeted the results of that intentional test-to-destruction just a few hours after it was completed, revealing that SpaceX’s upgraded production and integration techniques enabled the tank to survive pressures almost 20% greater than the minimum Starships will need to perform orbital launches.

“Critically, the tank reached a maximum sustained pressure of 7.1 bar (103 psi), 18% more than the operating pressure (6 bar/87 psi) Musk says Starship prototypes will need to begin orbital test flights. At 7.1 bar, the test tank would have been experiencing an incredible ~20,000 metric tons (45 million lbf) of force spread out over its interior surfaces — equivalent to ~20% of the weight of an entire US Navy aircraft carrier. Perhaps even more impressive, that same Starship test tank was built from almost nothing extremely quickly, going from first weld to said pressurization test in just three weeks (20 days).

With relatively minor improvements to welding conditions and the manufacturing precision of Starship rings and domes, Musk believes that SpaceX can reliably build Starships and Super Heavy boosters to survive pressures greater than 8.5 bar (125 psi), guaranteeing a safety margin of at least 40%. Even a minor improvement of ~6% would give Starship a safety margin of 125%, enough – in the eyes of most engineering standards committees – to reasonably certify Starships for orbital test flights.”

This brings us to January 27th, a little over two weeks after SpaceX completed and burst the first standalone Starship test tank. Over the last week, SpaceX has quickly assembled a second Starship test tank, using a few clearly new methods and parts, as well as a brand-new tent built by the same company that Tesla used for Fremont’s fourth General Assembly line.

In the last few days, two new bulkheads and steel rings came together to form Starship test tank #2, which was subsequently prepped for transport and moved about a mile down the road to SpaceX’s launch facilities on the morning of January 27th. Scarcely a few hours later, well before anyone was paying close attention for test activities, Elon Musk took to Twitter to reveal that the second tank had already been subjected to a pressure test with water. That second tank reportedly survived up to 7.5 bar, an improvement of about 6% compared to the first tank.

This time, however, the tank wasn’t actually catastrophically destroyed by the pressure test, instead developing a leak around the weld connecting the two halves that lead SpaceX to back off. Musk says that that presumably small leak will now be repaired, after which the same tank will be tested again but with one significant difference. Musk says that Test Tank #2’s second pressure test will be performed with a cryogenic liquid — most likely liquid nitrogen (LN2).

In replies after his reveal, Musk noted that he believed the second test tank could perform significantly better if pressurized with a cryogenic liquid. That’s because certain types of steel – particularly those SpaceX has chosen for Starship – exhibit something known as cryogenic hardening when exposed to extremely cold temperatures, producing steel that can be dramatically stronger by some measures.

Ultimately, as mentioned above, a tank pressure safety margin of 125% is the minimum most engineering standards provide for any given orbital-class launch vehicle. At 7.5 bar, even under the very unlikely assumption that Starship tanks will not see even a marginal strength increase at cryogenic temperatures, SpaceX’s second Starship test tank has officially hit that 125% safety margin. As Musk himself noted on Monday, he is now confident that SpaceX can immediately start building the first Starship destined for spaceflight and further revealed that two of that particular Starship’s three tank domes are already nearing completion.