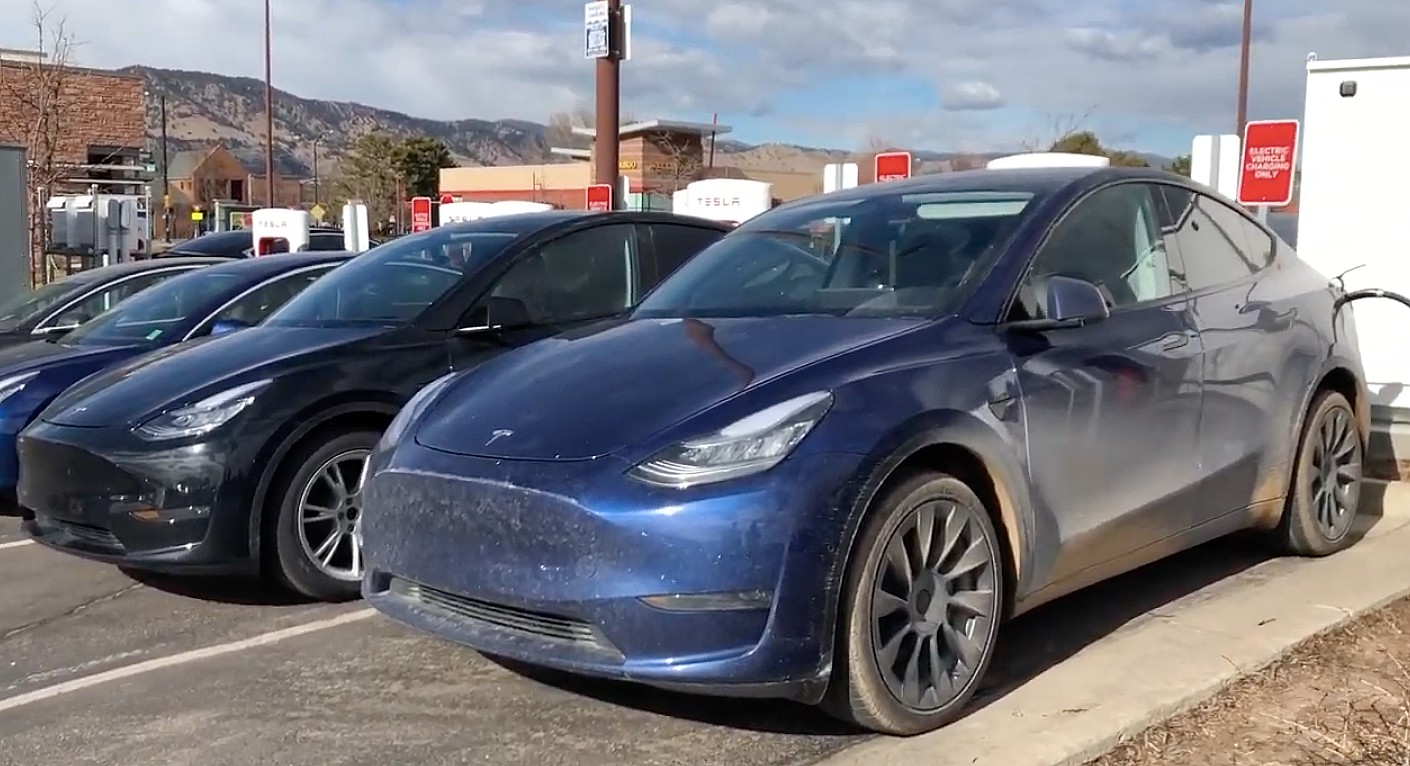 Tesla Model Y twins get spotted at CO, and one may have been off-roading

A rare twin sighting of the Tesla Model Y was recently reported by a Model X owner during a Supercharging session in Boulder, CO. Both vehicles, which were fitted with Dual Motor badges, seemed to have just completed some serious road testing. What’s more, one of the Model Y release candidates looks like it was taken for a brief spin off-road.

The recent twin Model Y sighting was shared online by Tesla owner and YouTube host Rocket, who happens to live in his Model X. Describing the sighting, Rocket stated that four Tesla engineers were with the two all-electric crossovers, and each vehicle was equipped with what appeared to be testing equipment in the cabin.

The two vehicles, one painted in black and the other in blue, are both battle-worn from their travels. Interestingly enough, the blue Model Y release candidate was caked with dirt and dust, almost as if the vehicle was driven into a number of unpaved trails. The black Model Y was dirty from its travels as well, but it didn’t have the soil and dirt that caked the lower half of the blue crossover. The implications of this are compelling.

The Tesla Model Y is expected to be a city car through and through. It’s a crossover, but it’s looked upon more as a practical family hauler whose exclusive habitat is the concrete jungle. With this in mind, even a small degree of off-road capability, something akin to the one offered by the Mercedes-Benz GLA, for example, will allow the Model Y to provide more utility than initially expected. That’s a very significant additional selling point for the upcoming vehicle.

Both vehicles in the sighting appear to be Dual Motor variants, though the black unit seemed to be a Performance Model Y. This was hinted at by the crossover’s red brake calipers, which are usually reserved for Tesla’s Performance line. The vehicle was also equipped with unreleased wheels, whose design elements are starting to look very similar to the Model 3’s 18” Aero Wheels.

The Model Y, at least according to Tesla, will likely start deliveries sometime around Summer this year. Yet if these recent sightings, VIN filings, and CARB certifications are any indication, it appears that Tesla’s all-electric crossover may be coming to the market earlier than expected. Amidst rumors that initial deliveries of the vehicle are just around the corner, Tesla may likely release an official Model Y update during its upcoming Q4 2019 earnings call as well.

Watch Rocket’s twin Model Y sighting in the videos below.

Tesla Model Y twins get spotted at CO, and one may have been off-roading