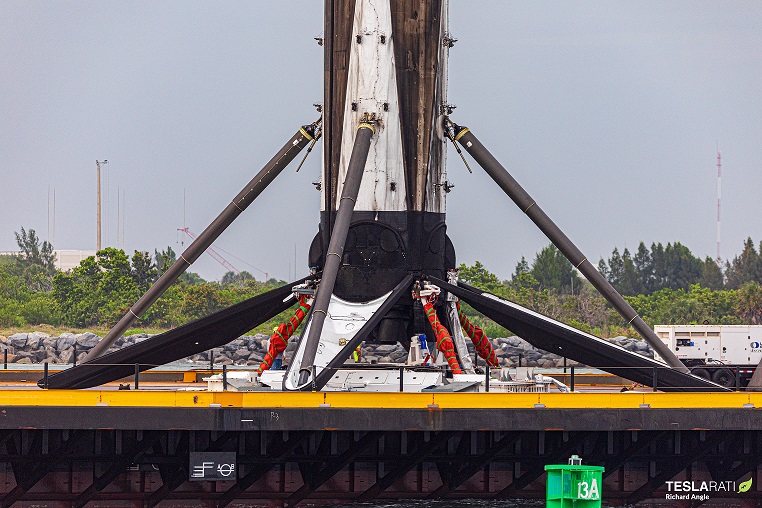 Booster B1049 returned to Port after delivering a batch of 60 Starlink satellites into space. Credit: R. Angle/Teslarati

SpaceX has successfully recovered its second Falcon 9 in less than a week. Just four days after it launched, booster B1049 returned to sailed into Port Canaveral. The veteran booster is the first to launch and successfully land five times. On June 3, at 9:25 p.m. EDT (0125 GMT on June 4), B1049 took to the skies, delivering another batch of Starlink satellites into orbit.

Now, just three days after a flawless mission, the veteran rocket sailed triumphantly into port. Perched atop SpaceX’s newly remodeled drone ship, Just Read the Instructions (JRTI), B1049’s exterior was visibly more charred after its most recent trip through the atmosphere. This successful landing marks the first mission that JRTI was active in the Atlantic Ocean, as well as the third successful sea recovery in a row for SpaceX.

So far this year, SpaceX has successfully launched nine boosters this year. All but two of them have been recovered—two failed to land on the drone ship. One of those botched attempts was due to some residual cleaning agents trapped inside the engine. That booster, B1048, was SpaceX’s only other booster (so far) to fly five times.

But it surely won’t be the last. B1051 has already completed four successful missions and could see flight again soon. SpaceX has at least two other launches planned for June, including another Starlink launch and the launch of a GPS satellite for the Air Force. That flight will be on a new booster, B1060, per the Air Force’s request.

As it stands now, government payloads require SpaceX to use a new booster, versus a previously flown one. That was also the case for NASA’s commercial crew program. On May 30, astronauts Bob Behnken and Doug Hurley flew to the International Space Station atop a Falcon 9 rocket. The booster, which returned to Port just a few days ago, what a shiny new booster. However, in a recent development, NASA amended the agreement, saying that SpaceX could use previously flown boosters as well as reuse its Crew Dragon spacecraft.

Currently, SpaceX reuses its cargo version of Dragon, but each upgraded cargo (and Crew) variant can be reused as many as five times. Each booster is currently rated for ten flights, with minimal refurbishments in between.

Flying for the 5th time, the #SpaceX #Falcon9 launches from SLC-40 to bring another batch of #Starlink sats to orbit! The first stage was also recovered, marking the first time a booster has landed after 5 flights! pic.twitter.com/KcsNecEoI3

SpaceX’s fleet of veteran rockets has dwindled a bit, with the loss of B1048 and B1056. Those losses came on the heels of two planned expenditures: B1046 and B1047. B1046was purposefully detonated as part of the company’s In-flight Abort test that occurred in January. That test was a lead up to the Demo-2 mission and proved that SpaceX’s launch escape system worked while B1047 carried the AMOS-17 satellite into orbit and was expended after depositing the satellite into space.

However, the California-based rocket builder should have some new Falcons rolling off the assembly line this summer, which will help support its ambitious Starlink launch manifest. This year, SpaceX has launched six Starlink missions, with at least one more planned for June, possibly two.

To date, SpaceX has launched a total of 482 Starlink satellites, but the company needs between 400-800 satellites on orbit to begin rolling out minimal coverage. To provide the coverage it wants, SpaceX is going to have to keep up the launch pace. And to do so, it will test the reusability factor of its rockets.

So far, we’ve seen two rockets fly five times, but when will B1049 fly a sixth time? How soon will we see a booster reach the 10-flight mark? What sort of refurbishments will it need then? With many more Starlink flights on deck, it will be interesting to see which boosters fly on which missions.