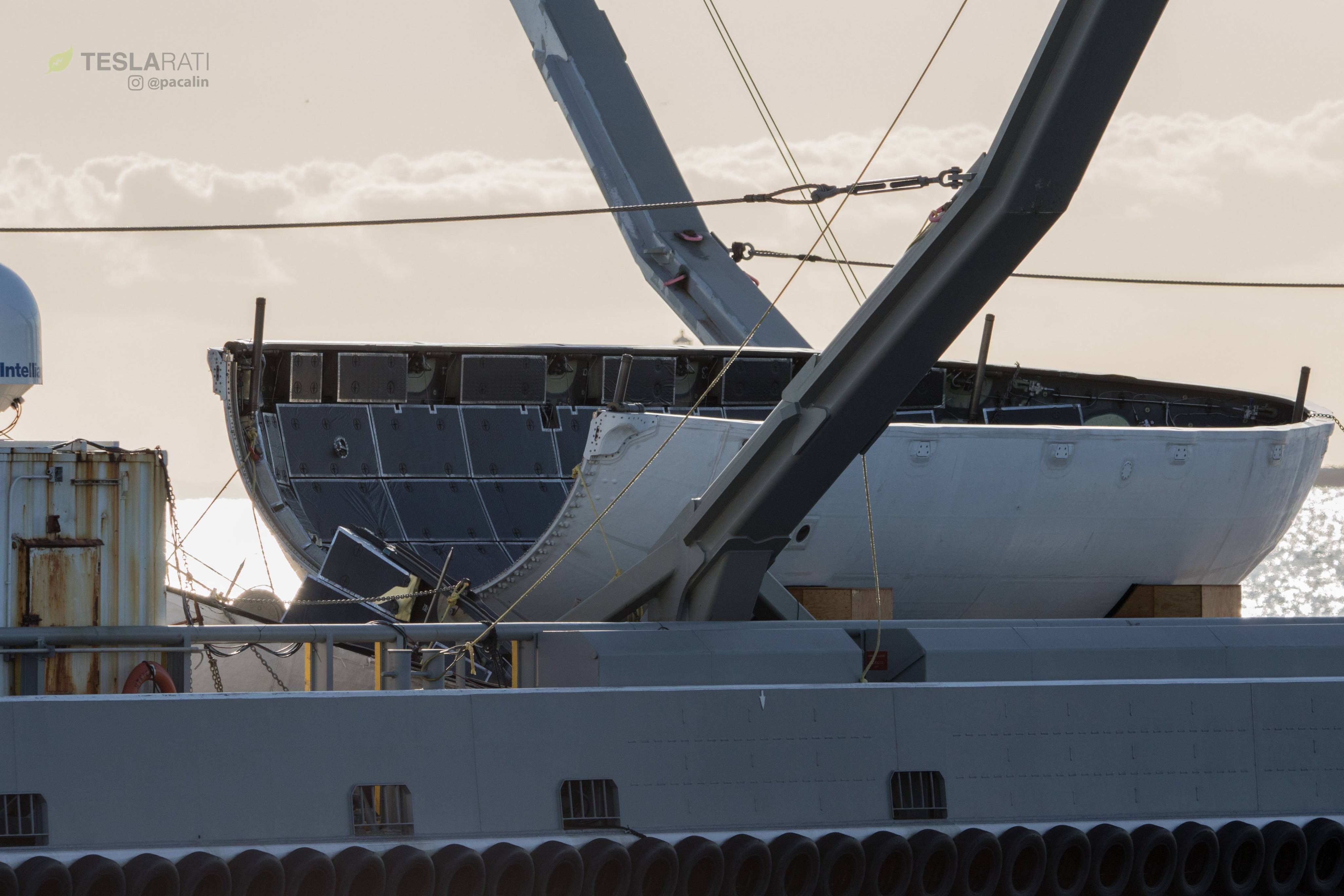 Just 24 hours after gently landing in the ocean, SpaceX recovery technicians have successfully recovered one half of an intact Falcon payload fairing for the first time ever. Photos of the return to Port of San Pedro in Southern California, captured by Teslarati photographer Pauline Acalin, show that the halve recovered is in amazing condition considering its journey from speeds of nearly two miles per second (approximately 30 football fields per second, or more than ten times faster than a commercial passenger jet), to a soft, watery halt.

Despite the fact that SpaceX’s recovery boat, Mr Steven, was unable to catch the fairing as intended, a truly 100% successful recovery using the vessel’s specially-designed net is all but a foregone conclusion. If the fairing can gently land in the ocean looking as good as this article does, avoiding the water entirely should be a relatively simple matter of tweaking recovery hardware and software – a slightly larger parafoil as mentioned by Elon Musk, for example.

This recovery marks the end of yet another successful flight-proven SpaceX launch, this time tasked with carrying the Spanish PAZ imaging satellite and two SpaceX Starlink prototypes into a sun-synchronous orbit around Earth. We’re just two full months into 2018 and SpaceX appears to already be nearing the end of its fairing recovery development program, with operational fairing recovery and reuse the next (imminent) task at hand.

The most important unknown here is just how well SpaceX’s fairing design is able to cope with even brief contact with or immersion in saltwater, a natural corrosive agent. As a Teslarati reader rightly noted, carbon fiber composites do currently see quite a bit of use in boating, apparently no worse for wear in terms of maintainability. However, carbon fiber components on marine vessels are treated and coated with specially-chosen laminates and waterproofing materials to prevent saltwater intrusion. It’s unclear if SpaceX’s fairings include the same sort of treatment, although it can be all but guaranteed that the outside of the fairing is designed to be perfectly sealed against the environment – a necessity to protect sensitive satellite components from local weather and humidity.

Mr. Steven pulling into port in San Pedro with a beautifully intact fairing. Next attempt at catching the fairing in the ship’s net is about a month away! #spaceX #paz @teslarati #starlink pic.twitter.com/FM2tpowktL

Of course, reuse for this particular fairing half may be out of the question given its pathfinder position. SpaceX may destructively analyze and test the recovered fairing to gather as much detail as possible about its condition after a rough reentry and some ocean-floating leisure time. In line with my above speculation, recovery technicians and engineers will judge how much (if any) saltwater managed to get inside the fairing, while also judging the condition of the giant halve’s carbon composite structure. Just like SpaceX chose to display its first successfully landed Falcon 9 booster outside of their Hawthorne, CA factory, they may hold onto this intact fairing as a piece of SpaceX history, maybe even put it on display in or around one of SpaceX’s US facilities. 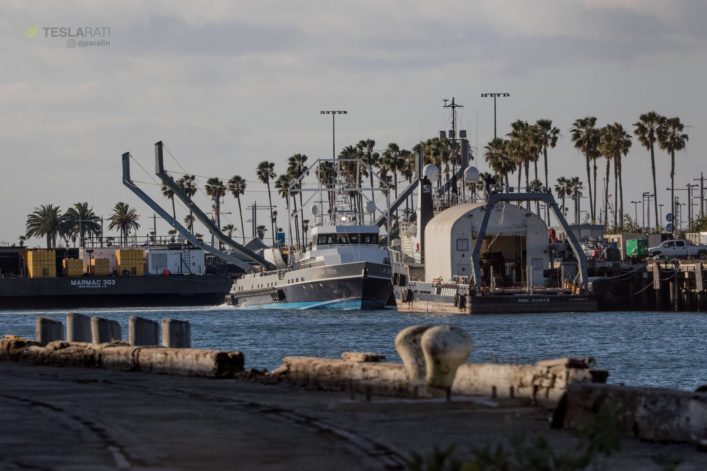 For the first time, photographers have a chance to photograph a single fairing halve in high detail. (Pauline Acalin) 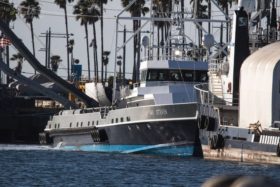 Mr Steven is looking as good as ever, despite not being able to flex its new net. (Pauline Acalin) 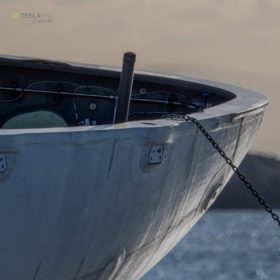 Could just be me, but that is one BEAUTIFUL hunk of carbon fiber and aluminum. (Pauline Acalin) 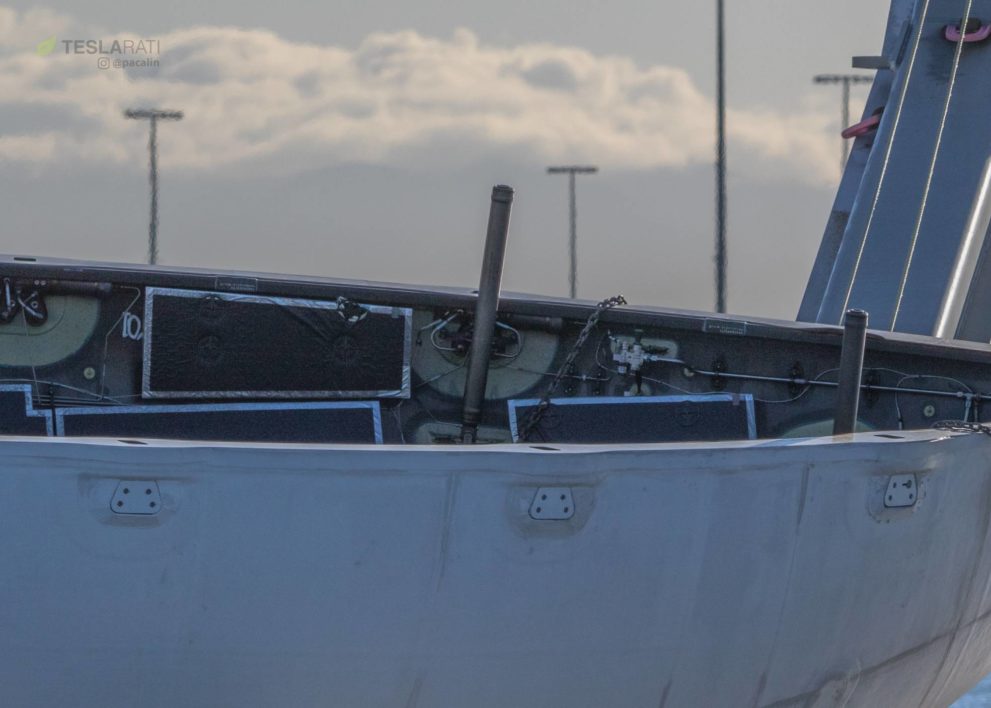 With the next Mr Steven-led fairing recovery set to occur on March 29, SpaceX will have plenty of additional options to firm up their expertise with the newly successful practice. In fact, the upcoming February 25 launch and “hot” landing of Hispasat 30W – this time on the East coast – could also see its own successful fairing recovery, given the fact that PAZ’s fairing technically survived intact without the use of Mr Steven’s gentler catching mitt. Time will tell!

Follow us on social media for down-to-the-minute and behind the scenes updates on SpaceX activities.