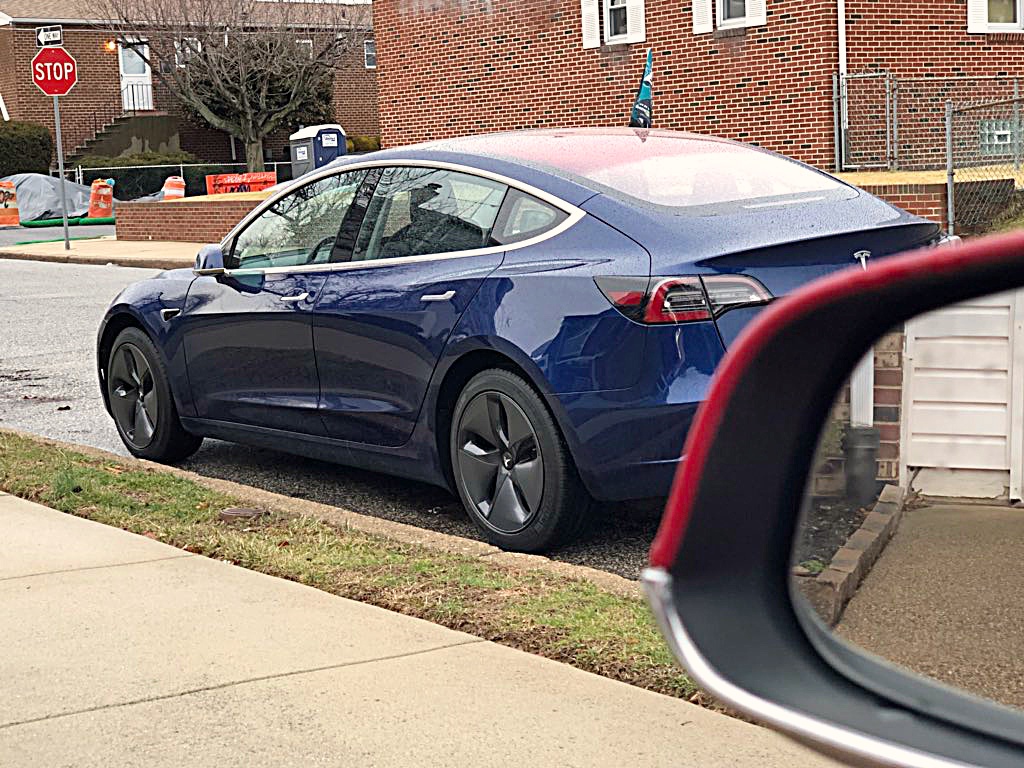 After nearly two years of waiting after putting down my deposit on the day of Model 3 Mania, I finally took delivery of my Model 3 on February 12th, 2018.

I actually don’t need Tesla’s Long Range Model 3 for my short daily commute, but realizing that on a range per dollar basis the vehicle’s 310-mile range works out to be an amazing deal, I succumbed to the temptation and ordered Tesla’s “first production” Model 3 just so I can get the car sooner.

Tesla indicated a 4-week delivery window at the time I placed my Model 3 order, which admittedly I was skeptical of. Especially as 2 weeks after I configured, I still did not have a VIN assigned. I’m happy to report, however, that all the way out here on the East Coast, I did, in fact, take delivery 2 days shy of 4 weeks from configuration. The delivery team was top notch: from my inside sales adviser, to the local delivery specialist, to the two product specialists who introduced me to the car, the Tesla team is simply spectacular. This doesn’t come as a surprise to me, as everyone I’ve ever dealt with at Tesla since my very first Model S test drive nearly 4 years ago has been a pleasure to interact with.

What do I think of the Tesla Model 3?

Without further delay, let me jump right into the car. The most important thing to talk about is how the car drives and I’m pleased to say that it immediately met my very high expectations. I’ll be the first to tell you that the Model S is the best car money can buy but it is bigger and heavier than I prefer. Yes, an incredible fangirl will admit that she does not prefer a full sized sedan.

The Model 3 is lighter and smaller and by default feels agile. The Model S, as big as it is, was plenty agile when a deer ran out in front of me and my inexperienced, city-living-self swerved to avoid it. The steering wheel feels as thick and luxurious as the Model S, but is smaller and reminds me of a race car. I changed the steering setting to Sport mode before I even left the delivery bay and find it to be perfect for my preferences.

Tesla’s Model 3 also stops more easily due to its overall lighter weight than the Model S. I wouldn’t think much about that except for the fact that it is winter where I live and regenerative braking is limited much of the time due to weather conditions.

What about the interior? For one, I adore the instrument cluster in the Model S where I have an at-a-glance-view of my energy consumption and current trip stats. Being able to see a zoomed-in view of your navigation route directly in front of you is also something I’ve gotten used to that the instrument cluster-less Model 3 doesn’t have. Also, major indicators like speed and Autopilot information are front and center where it feels like it should be located.

While I knew I could most likely get used to Model 3’s single center-mounted touchscreen, I wasn’t sure how long that would take. I can say that after driving the Model 3 for a few days, viewing data on the left side of the landscape-oriented screen became second nature. 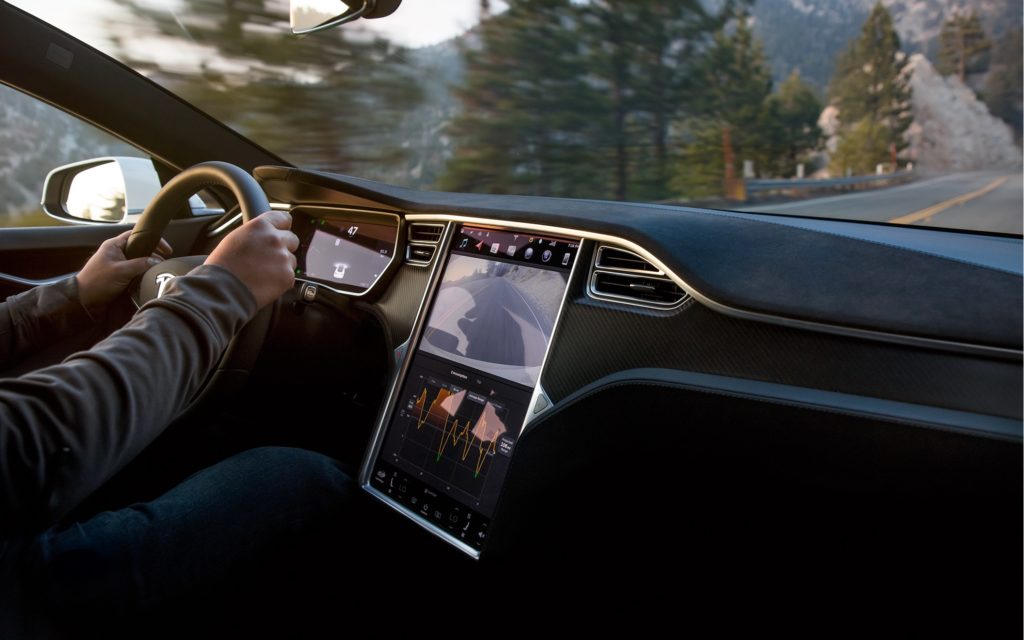 Even my mother, who drives a 2004 Chevy Trailblazer that she says, while crossing her fingers, will live forever, got used to Model 3’s display 5 minutes into her drive. She has never been behind the wheel of our Model S, or any car even close to being this technologically advanced, yet had no problem adjusting. She has, however, been behind the wheel of many older, performance-minded cars with both manual and automatic transmissions but immediately gushed over our Model 3’s zippiness.

And for the much talked about Model 3 headliner: I love it! Our Model S has the standard textile headliner in tan, which I find a little odd when matched with a black leather interior. The light gray headliner in the Model 3 looks great and knowing that the same durable textile material in our S is also in our 3, I’m confident that it’ll hold up after nearly 60,000 miles.

Model 3’s horizontal HVAC vent that has airflow that can be split in two via touchscreen is simply genius. It is stunning, clean and effective. Mark my words this will be copied by other automakers. 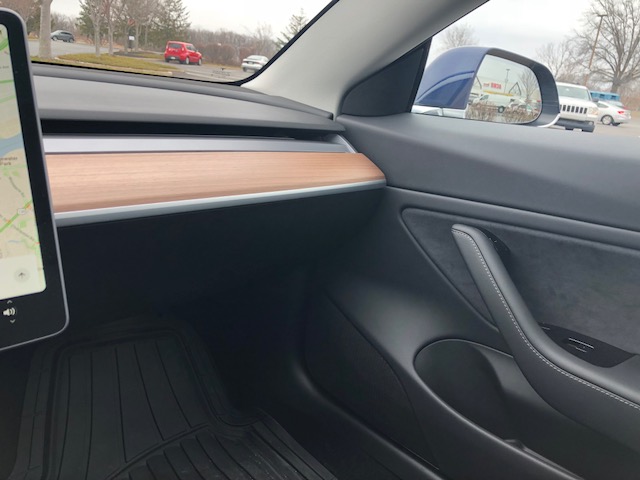 Tesla Model 3 can be improved

So what don’t I like about the Model 3? It turns out that there are plenty of things that can be changed, but I realize that nearly any other car you buy will be the best it can be the day you drive it off the lot. It will never get better and certainly not at your home, for free, over the air. A Tesla is the opposite.

If and when Tesla receives enough feedback from owners, they can make a change and beam it over to you. It’s a huge paradigm shift and one I’m happy to be a part of.

That being said, here is a list of my own observations of things I would like to see changed in the Tesla Model 3: 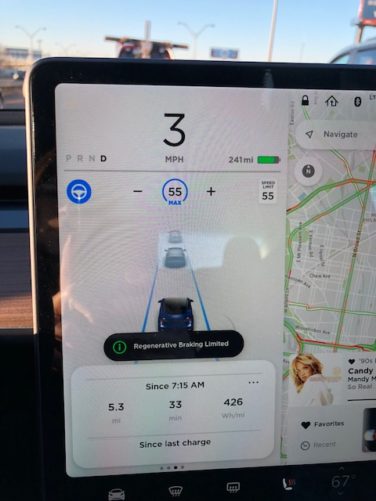 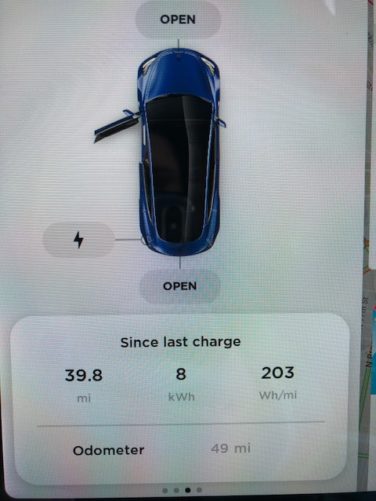 38 miles per hour of rated range being added

After being parked outside overnight with temps in the mid-20s, I did not get back full regen during my 46 minute, low speed drive. It didn’t feel completely gone so I suspect it was only slightly limited, but as noted earlier, I just can’t tell because that information is not displayed. I’m not knocking the limited regen, as this is a known behavior of an electric car, but worth reminding those of you for whom the Model 3 will be your first. Especially true if you get your car in the warmer weather and your first cold snap shocks you.

Baby boy’s first snow, and the wild colors of the glass roof when wet and sunny. #Model3 pic.twitter.com/m7SSPO06Wt

In closing, let me just say that the one day of the week I used to drive our Model S was always my favorite. Today I drove the Model S so my husband could take a turn with our new 3 and, well, I miss it.