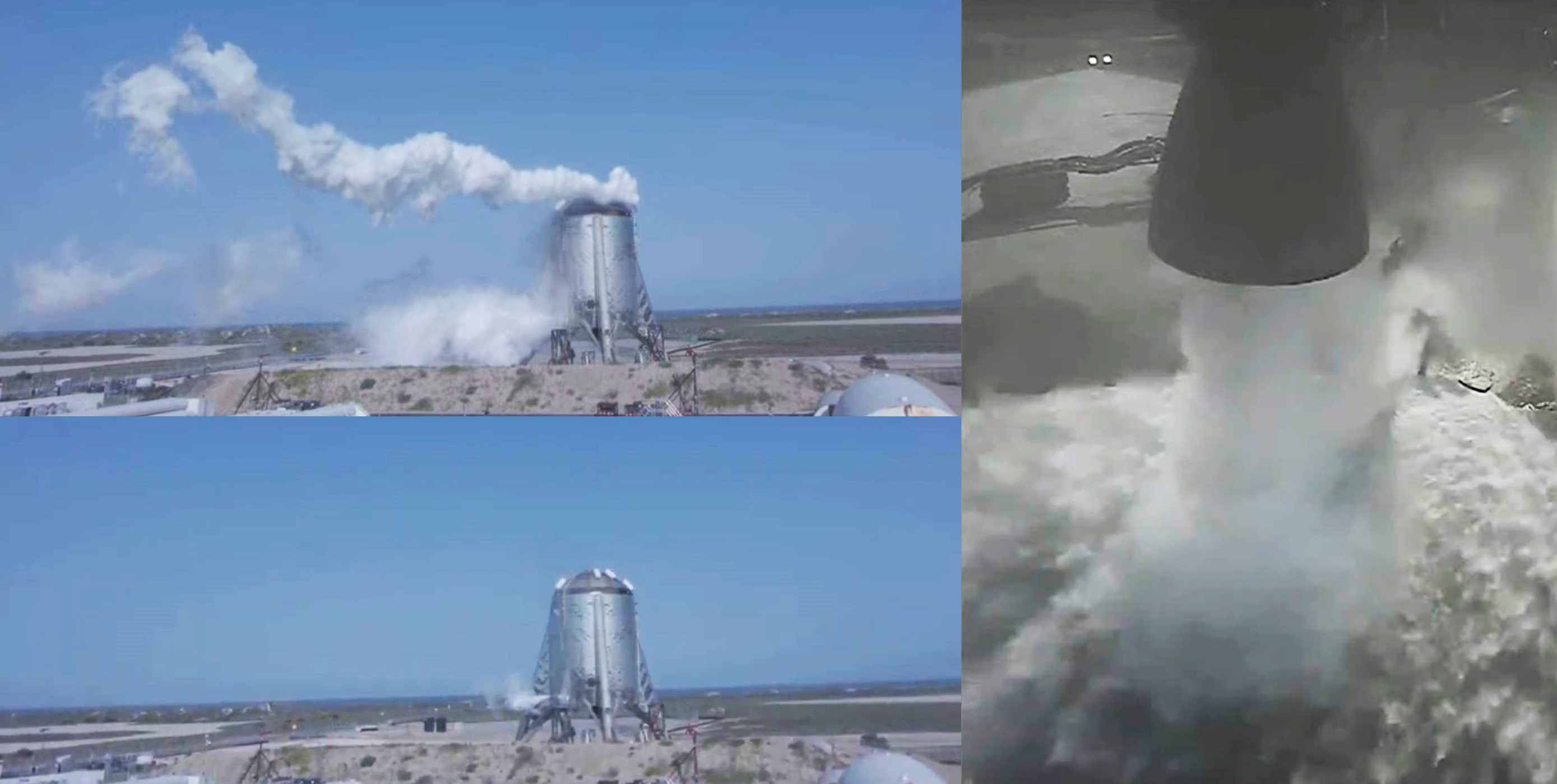 For unknown reasons, SpaceX’s Starhopper prototype suffered a hold just 0.8 seconds prior to its second planned flight test, a hold that was eventually followed by a decision to scrub the August 26th attempt and try again tomorrow, August 27th.

Starhopper is a full-scale, partial-height testbed for SpaceX’s next-generation Starship launch vehicle, serving more as a semi-mobile test stand for steel rockets and Raptor engines than an actual Starship prototype. The unusual vehicle took flight for the first time ever on July 25th, reaching an altitude of roughly 20m (65 ft) under the power of a single Raptor engine, capable of producing up to 200 tons (450,000 lbf) of thrust. That test also suffered a minor scrub on the 24th, followed by a successful flight one day later, a chapter that Starhopper may now mirror on its second attempted flight, a 150m (500 ft) hop.

The CEO later confirmed that that comment was directly related to the 26th’s scrub, indicating that Raptor serial number 06 (SN06) needed to have its igniters inspected prior to a second hop test attempt, now scheduled to occur no earlier than 6pm EDT (22:00 UTC) on August 27th. The gist of the difficulties with Raptor’s igniter starts with the reason that SpaceX is attempting to integrate an entirely new form of ignition into the engine, replacing the methods successfully used over tens or even hundreds of thousands of seconds of firing with the company’s Merlin 1 and Merlin Vacuum engines.

Merlin 1D and MVacD both rely on a relatively simple, reliable, cheap, and easy method of chemical ignition, using a duo of pyrophoric materials known as triethylaluminum-triethylborane (TEA-TEB). When mixed, these materials immediately combust, generating an iconic green flash visible during Falcon 9 and Heavy launches, and thus producing the ‘spark’ needed to start Merlin engines.

Generally speaking, TEA-TEB is an excellent method of igniting rockets, even if it is more of a brute-force, inelegant solution than alternatives. It does, however, bring limitations: every single ignition requires a new ‘cartridge’ be expended, fundamentally limiting the number of times Merlin 1D (and Merlin Vacuum) engines can be ignited before and after liftoff.

This doesn’t even consider the fact that TEA-TEB are extremely complex chemical products that would be next to impossible to produce off of Earth, at least for the indefinite future.

To combat these downsides, SpaceX has designed Raptor with an entirely different method of ignition, known as torch ignition. Technically speaking, Raptor’s power, design, and methalox propellant combine to demand more than a relatively common solution, in which spark plugs are used to ignite an engine. Instead, Raptor uses those spark plugs to ignite its ignition sources, what CEO Elon Musk has described as full-up blow torches. Once ignited, those blow torches – likely miniature rocket engines using the same methane and oxygen fuel as Raptor – then ignite the engine’s methane and oxygen preburners before finally igniting those mixed, high-pressure gases in the combustion chamber.

In simple terms, the fact that Raptor is a full-flow staged-combustion (FFSC) engine means that the pressures it must operate under are extreme, verging on unprecedented in large-scale rocketry. Extremely high-pressure gases (on the order of 3,000-10,000+ psi or 200-700+ bar) are just as difficult to reliably ignite, especially if hypergolic solutions (i.e. TEA-TEB) are off the table.

To get an even ignition – critical to avoid burn-through, minor explosions, and even catastrophic engine failures – Raptor’s torch ignition may actually involve a 360-degree ring of spark plug-lit torches around the point of ignition, an undeniably complex solution.

However, as Musk notes, these significant, “finicky” challenges brought on by Raptor’s exotic ignition method are motivated by the potential benefits such a solution might bring. Relative to Merlin 1D’s TEA-TEB ignition, torch ignition – once optimized and matured into a reliable solution – will permit an almost unlimited number of Raptor ignitions before, during, and after flight.

Avoiding TEA-TEB and other complex chemical igniters also means that Starship will technically be able to launch to Mars or the Moon, perform injection and landing burns, maybe even hop around the surface, and still be able to return to Earth – all without resupply. Such a return voyage would still be predicated on the ability to generate the methane and oxygen propellant needed to fuel Starships, but – assuming that challenge can be solved – torch-lit Raptors would be ready for such a mission. In the event that, say, something like August 26th’s scrub happens to a Starship on Mars, the crew would also be able to get out, inspect Starship’s Raptors, and even replace faulty spark plugs if necessary.

Technically, one could bring lots of spare TEA-TEB cartridges and install those in space or after landing, but those cartridges are quite literally firebombs waiting to ignite, whereas spare spark plugs are entirely inert.

For now, we’ll have to wait for SpaceX technicians to get their eyes and hands-on Starhopper’s lone Raptor engine to verify that its ignition hardware is in good health. If all goes well, Starhopper will attempt its final flight test as early as August 27th.