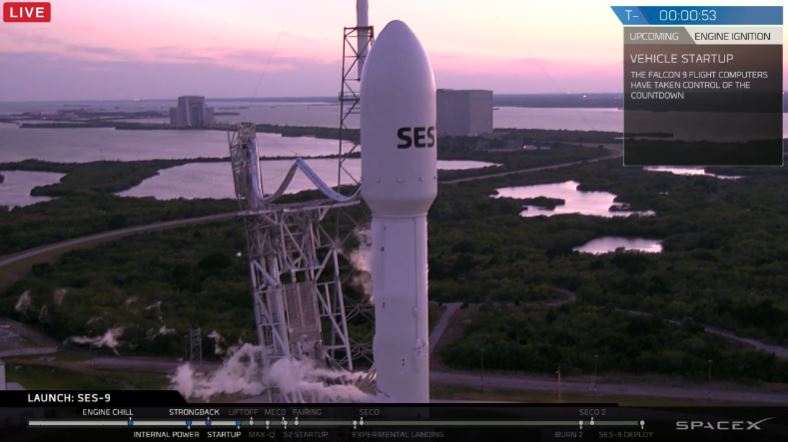 A SpaceX Falcon 9 rocket was able to launch successfully SES-9 communications satellite on board. It was the fifth attempt to place the satellite into orbit.

Shortly after 6:35 ET on Friday, SpaceX was finally able to conduct a successful launch of the SES-9 communications satellite from Cape Canaveral Florida. No meandering tug boats in the launch zone, no high level wind shear affected the flight today which had been postponed on four previous occasions.

Everything went off precisely as planned. The first stage fired on time and lifted the Falcon 9 into low earth orbit until it burned itself out and began falling back to earth. A planned landing aboard a floating recovery platform was well underway when visual and audio communication with the the rocket and the recovery ship were lost. News from Twitter indicates that the Falcon 9 first stage rocket did not stick the landing though we’ll be sure to report back once we learn more.

#Falcon9 booster did not survive landing, confirmed by #SpaceX. #SES9

Rocket landed hard on the droneship. Didn't expect this one to work (v hot reentry), but next flight has a good chance.

SpaceX said prior to the launch that a successful recovery was a statistical long shot. The first stage traveled far higher and faster than the similar unit that was recovered on land back in December. Both the greater speed and higher trajectory will make recovery this time much more difficult. The big question is whether there will be enough rocket fuel remaining to slow the craft down and maneuver it successfully to the recovery platform. According to SpaceX, the company “believes a fully and rapidly reusable rocket is the pivotal breakthrough needed to substantially reduce the cost of space access. The majority of the launch cost comes from building the rocket, which flies only once. Compare that to a commercial airliner—each new plane costs about the same as Falcon 9, but can fly multiple times per day, and conduct tens of thousands of flights over its lifetime. Following the commercial model, a rapidly reusable space launch vehicle could reduce the cost of traveling to space by a hundredfold.”

Target altitude of 40,600 km achieved. Thanks @SES_Satellites for riding on Falcon 9! Looking forward to future missions.

After the second burn, explosive bolts gave the SES 9 a gentle push away from the second stage and started it on its way into final orbit. It will take the spacecraft several months to get to its final position nearly 24,000 miles above the earth.