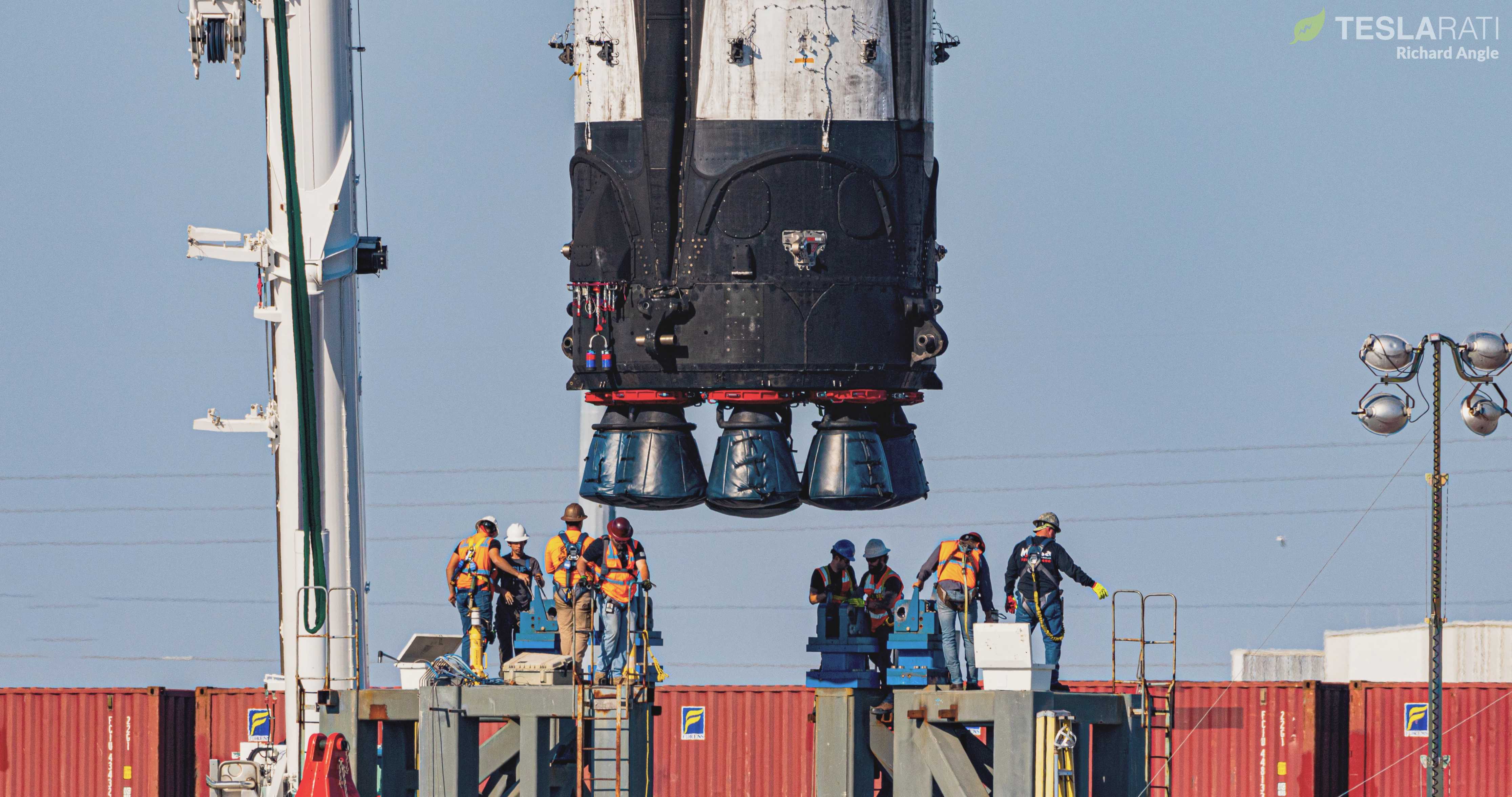 SpaceX technicians get ready to break over Falcon 9 booster B1048 before transporting the booster to a nearby refurbishment hangar. (Richard Angle)

Four days after it returned to port, SpaceX quickly brought its latest recovered Falcon 9 booster horizontal, the last step before it can be transported back to one of SpaceX’s launch pad-adjacent processing facilities.

For unknown reasons, SpaceX skipped retracting its landing legs, but thanks to its recent reusability record, this particular Falcon 9 booster is now more important than ever.

Eight and a half days after Falcon 9 helped deliver all 60 satellites to an exceptionally low ~280 km (175 mi) parking orbit, all satellites have successfully deployed their solar arrays and powered on their electric thrusters, including the lone spacecraft SpaceX had concerns about prior to launch. That straggler came alive roughly 60 hours after its siblings but has since raised its orbit ~20 km, while the other 59 satellites have booster themselves by an average of 40 km (25 mi) or so.

At their current collective pace of ~5 km per day, all 60 satellites should reach their operational ~550 km (340 mi) orbits around the beginning of 2020.

A bit less than nine minutes after its inaugural fourth launch, B1048 also became the first Falcon 9 booster to successfully land four times, coming to a halt near the center of drone ship Of Course I Still Love You (OCISLY). With its Port Canaveral processing nearly complete, B1048 now finds itself in a rare position.

As the first Falcon 9 Block 5 booster to fly four times, B1048 has first and foremost proven that the Block 5 design can be practically reused at least three times. However, the Block 5 upgrade is designed to support not just four – but at least ten – launches per booster, and SpaceX CEO Elon Musk has estimated that 100 or more launches may be achievable with more substantial routine maintenance. All this is to say that with B1048.4 safe and sound back on land, SpaceX technicians and engineers will likely pore over the booster to determine how exactly it has fared after four orbital-class launches, atmospheric reentries, and landings.

Stated a different way, B1048 is now the Block 5 upgrade’s pathfinder vehicle, meaning that it will in large part determine how SpaceX proceeds with its Falcon 9 reusability program. SpaceX has done this several times in the past – as long as the envelope is being pushed, and even if it’s not, there will always be ‘firsts’ to achieve, be it the first launch of a new rocket or the first launch of a thrice-flown booster. Prior to B1048, B1046 – also the first Falcon 9 Block 5 booster – was the pathfinder for reusability, becoming the first Block 5 booster to be reused for the first time and the second time (launch #3).

However, at the same time, Falcon 9 B1048.4 is arguably less important than it might seem. Perhaps the most useful data to be gained from the new pathfinder will involve comparing it to the likely extensively engineering data SpaceX has gathered from thrice-flown Falcon 9 boosters, including B1048 itself. Although still a fundamentally minuscule sample size in the scope of statistical significance, SpaceX has flown four (soon to be five) separate Falcon 9 boosters three times apiece.

By comparing B1048.4 to B1046.3, B1047.3, B1048.3, and B1049.3, SpaceX should be able to determine just how big the hurdle from a third launch to a fourth launch is compared to going from two launches to three launches. If the changes between those different reusability milestones are similar, it will be increasingly easy for SpaceX to rationally conclude that Falcon 9 Block 5 is fully capable of achieving its 10-flight design goal. If booster wear and tear appears to speed up from Launch 3 to 4 relative to Launch 2 to 3, design tweaks or additional refurbishment may be needed.

Most importantly, however, gathering new, high-fidelity data from flight experience like B1048’s fourth launch ultimately allows SpaceX to systematize post-flight inspections, helping technicians and engineers know where to look and what to watch out for when processing and refurbishing flight-proven boosters. The more boosters, launches, and landings there are, the more confident SpaceX can be that those systems and processes are sound.

For unknown reasons, SpaceX briefly attempted to retract Falcon 9 B1048.4’s landing legs on November 18th but abandoned retraction after a few attempts. On November 19th, technicians processed B1048 exceptionally quickly, removing its legs, breaking the booster over (rotating it to a horizontal position), and securing it on SpaceX’s transporter in barely half a day.

With recovery operations nearly complete, SpaceX can transport B1048 from Port Canaveral to Cape Canaveral, moving the booster to one of many processing and integration hangars for a thorough inspection and any necessary refurbishment. With any luck, B1048 will be ready for its fifth launch sooner than later, maybe allowing it to support SpaceX’s next dedicated Starlink launch.