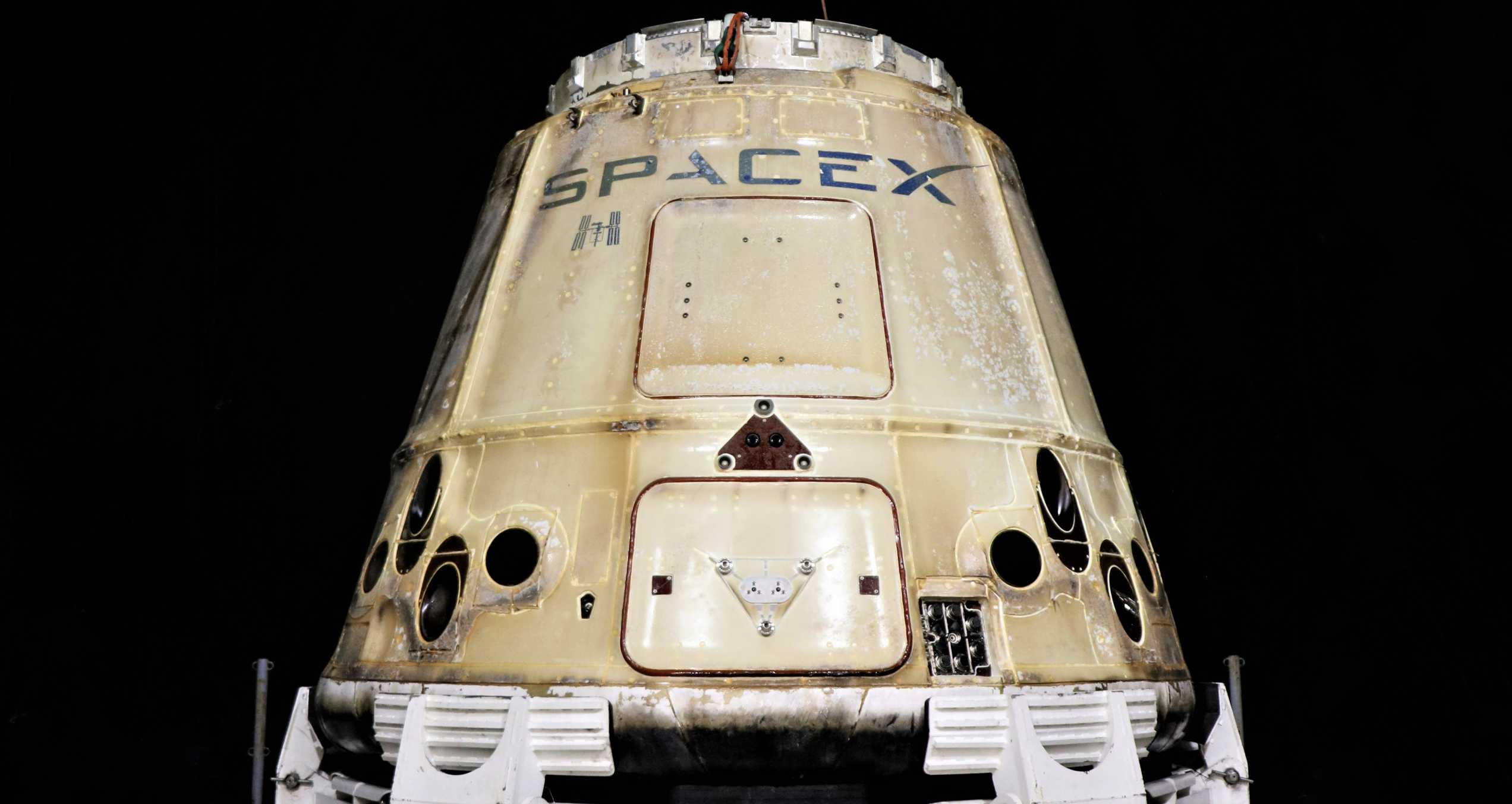 Dragon has returned to Port of Los Angeles for the last time, ending almost a decade of SpaceX's West Coast orbital spacecraft recovery work. Capsule C112 is pictured here in 2019 after its second mission.(SpaceX)

SpaceX has returned one of its reusable Dragon spacecraft to the Port of Los Angeles for the last time, wrapping up almost a decade of West Coast recovery operations as the company prepares to move East.

Marking the fully successful completion of Cargo Dragon’s CRS-20 space station resupply mission for NASA, the spacecraft’s arrival in port aboard recovery vessel NRC Quest is SpaceX’s 21st since December 2010. CRS-20 was the original Cargo Dragon spacecraft’s very last mission, meaning that the historic vehicle will have effectively entered retirement once SpaceX has finished capsule C112’s post-flight processing. More likely than not, it and its siblings may soon find themselves displayed in SpaceX facilities and aerospace museums across the US, a fitting end for an orbital spacecraft that effectively launched SpaceX onto the world’s spaceflight stage.

Cargo Dragon is by no means the last of its kind, however. SpaceX has already launched Crew Dragon – also known as Dragon 2 – on a flawless March 2019 orbital debut. An uncrewed variant of the same upgraded spacecraft will soon replace Cargo Dragon for uncrewed space station resupply missions under a second NASA Commercial Resupply Services contract (CRS2). For a variety of reasons, SpaceX has decided to move all Dragon 2 recovery operations to its Port Canaveral, Florida hub, now also the sole home of Falcon booster drone ship recoveries and payload fairing catch attempts. This means that April 9th’s Cargo Dragon homecoming is the last time a SpaceX spacecraft will return to the West Coast — a bittersweet end of an era.

Upon its safe return to shore, Cargo Dragon C112 is now the third Dragon spacecraft to successfully complete three separate orbital resupply missions, as well as the ninth Dragon reuse overall. While the recovered spacecraft may look like a very well-toasted marshmallow, all that visible wear and tear comes from a single orbital-velocity reentry, as SpaceX extensively refurbishes each Dragon before they are reused.

Before Cargo Dragon C112 lifted off on a Falcon 9 rocket for the third time on March 7th, it looked about as pristine as it did the first time it departed SpaceX’s Hawthorne, California factory in 2016. Aside from a duo of International Space Station badges added to the spacecraft’s exterior, it is functionally and visually identical, although parts of the capsule – like landing parachutes and its ablative heat shield – must be replaced after each mission.

Still, despite having to clean and resurface the spacecraft’s white thermal protection, replace heat shields, fabricate new disposable trunk sections, and much more for every launch, SpaceX CEO Elon Musk has stated that even the first Dragon reuse (likely the most expensive) was at least 50% cheaper than building a new spacecraft. Additionally, SpaceX clearly began to find its stride on Dragon capsule C112’s CRS-20 refurbishment, completing the process with record-breaking speed.

As previously discussed on Teslarati, “measured from splashdown to the capsule’s shipment to the launch pad, SpaceX may have spent less than a year refurbishing Cargo Dragon C112, potentially more than a 50% faster than all prior Dragon refurbishment operations.” Cargo Dragon’s Dragon 2 replacement is expected to be far easier to refurbish, while also potentially allowing for up to five orbital missions per spacecraft, while Dragon 1’s design was capped at three missions.

CRS-21 – SpaceX’s first NASA CRS2 mission and the first planned Cargo Dragon 2 launch – is scheduled for no earlier than (NET) October 2020. Meanwhile, Crew Dragon’s “Demo-2” astronaut debut is set to launch as early as late May. If successful, NASA says Crew Dragon’s first operational astronaut launch could happen as early as a month or two after splashdown (~Q4 2020).

After completing their orbital duties, all of those upgraded Dragon spacecraft are scheduled to reenter and splash down in the Atlantic Ocean, where they will be brought back to Cape Canaveral for processing and refurbishment. In the event that weather in the Atlantic Ocean is unacceptable for recovery operations, SpaceX has developed a backup recovery zone in the Gulf of Mexico. In short, it’s possible that Cargo Dragon’s April 7th Port of Los Angeles return will be the last time ever that the US West Coast supports orbital spacecraft recovery operations.