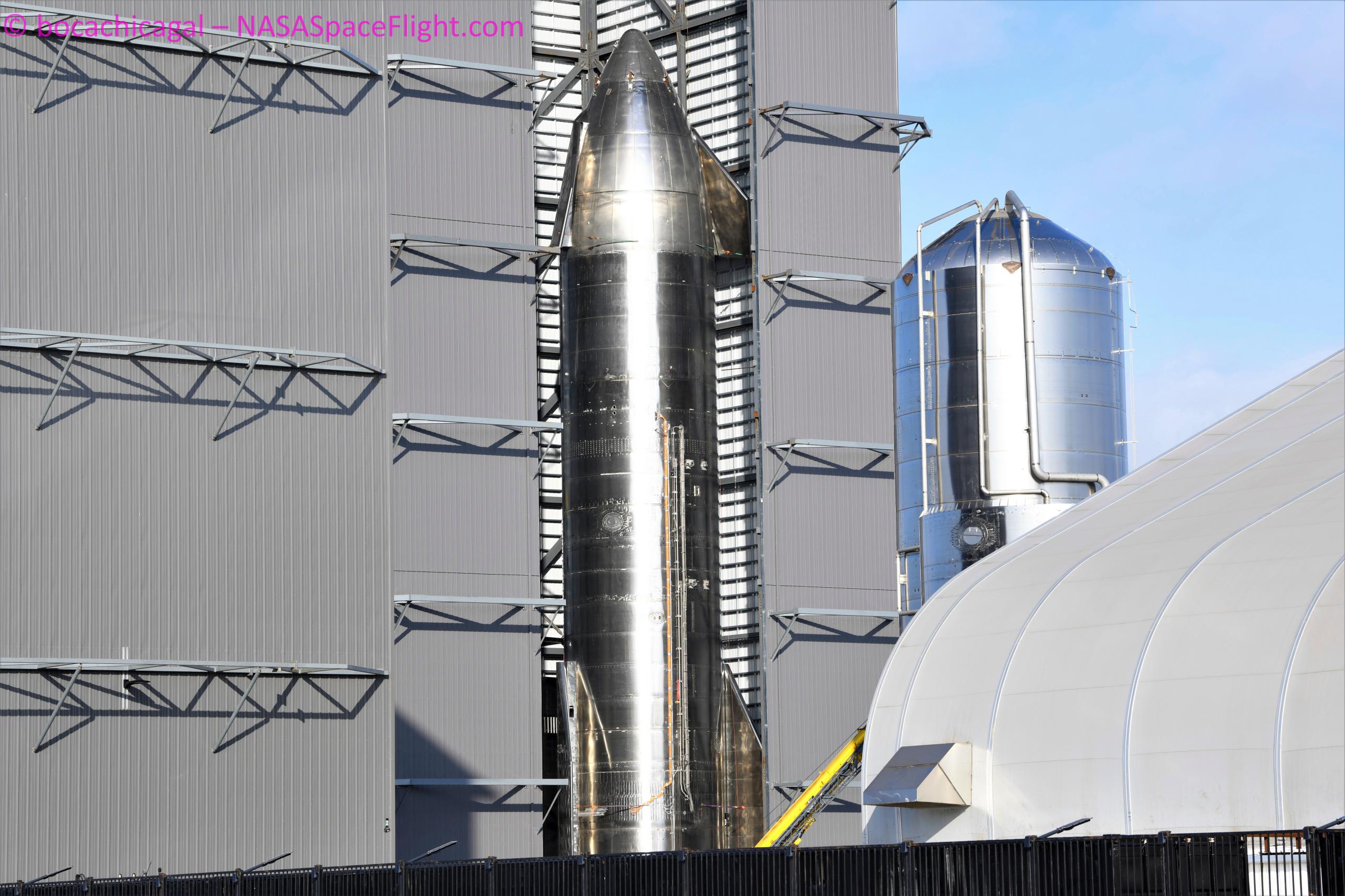 All but hidden behind Starship SN16, SpaceX appears to have begun stacking the first flightworthy Super Heavy booster. (NASASpaceflight - bocachicagal)

By all appearances, SpaceX has begun the process of stacking what could become the first Super Heavy booster capable of supporting orbital Starship test flights.

Known as booster number 3 (BN3), numerous sections of the 70-meter-tall (230 ft) steel rocket have been spotted at SpaceX’s Boca Chica, Texas factory over the last six or so weeks – adding up to a substantial portion of what is now expected to be the first flightworthy Super Heavy. Earlier this year, SpaceX stacked Super Heavy BN1 to its full height but late design changes effectively rendered the prototype largely irrelevant and turned it into more of a manufacturing pathfinder and source of practice than anything else.

As a result, BN1 never even left the high bay it was built in before SpaceX workers cut the booster into scrap. As of May, while a handful of parts for booster number 2 have been spotted, signs indicate that BN2 will be turned into a small test tank to qualify Super Heavy’s complex and unproven thrust dome and engine section.

That leaves Super Heavy BN3. According to NASASpaceflight.com, SpaceX has nominally assigned booster BN3 to support Starship SN20 on its inaugural space launch attempt. Just last week, SpaceX filed an application with the FCC for permission to communicate with Starship and Super Heavy during that “orbital test flight” – paperwork that included a six-month launch window scheduled to open no earlier than June 20th.

If approved by the FCC and – far more importantly – the FAA, Starship’s first “orbital test flight” will circumnavigate three-quarters of the world in approximately 90 minutes, launching from Boca Chica and ending – if all goes well – with Starship SN20 gently splashing down near Kauai, Hawai’i. From the sparse documentation SpaceX included in the public application, it’s ambiguous if there will be an attempt to recover Super Heavy booster BN3 or if the test flight will actually be orbital, given that Starship SN20 wont complete a full orbit.

Technically speaking, although a Starship capable of safely launching from Texas to Hawai’i is almost unequivocally capable of reaching orbit, the safest possible “orbital” flight test for such a massive spacecraft would stop just shy of orbit. A guaranteed free-return reentry would make it almost impossible for Starship to reach orbit, fail to deorbit after its first ~90 minutes in space, and end up posing a risk to populated areas – like, say, the now-infamous boosters of China’s Long March 5B rocket. Regardless, it’s clear that the specifics of Starship’s first spaceflight attempt are still very much up in the air and liable to change over the next few weeks.

What isn’t up in the air is the fact that SpaceX will need to all but fully assemble and test Super Heavy booster BN3 and Starship SN20 before any potential space shot. Along those lines, SpaceX still has a huge amount of work to do. Per Twitter user Brendan Lewis’ accounting, SpaceX has at least six BN3 sections – amounting to 22 rings and two of three tank domes – either completed or awaiting integration. The process of stacking BN3 began sometime in the last 7-10 days when SpaceX joined two four-ring sections – including the booster’s common dome, likely pictured above.

SpaceX has mostly completed BN3’s engine section, including a thrust dome with plumbing cutouts for a full 28 Raptor engines. Most recently, what looks like a Super Heavy fuel manifold appeared in Boca Chica. That manifold will attach to the end of a supersized Super Heavy transfer tube – also spotted in work – used to route methane through the liquid oxygen tank to fuel its Raptor engines. Fueling 28 large, high-performance Raptors is no mean feat and requires a rat’s nest of plumbing to feed them more than 15 metric tons (~30,000 lb) of propellant every second at full throttle.

Put simply, a majority of Super Heavy booster BN3’s hardware appears to be ready or almost ready for integration. The eight rings now stacked represent approximately 20% of the rocket’s full height, leaving another 30 or so rings – 54m (~180 ft) – to go. Given how long BN1 assembly took SpaceX, the company has its work cut out for it to fully integrate BN3 by June 20th, and the first operational Super Heavy prototype will almost certainly need to complete several major tests before being cleared for flight. As such, an inaugural space launch attempt in June or July is wildly implausible, but it’s far from out of the question that Starship and Super Heavy could be ready for their first “orbital test flight” before summer turns to fall.