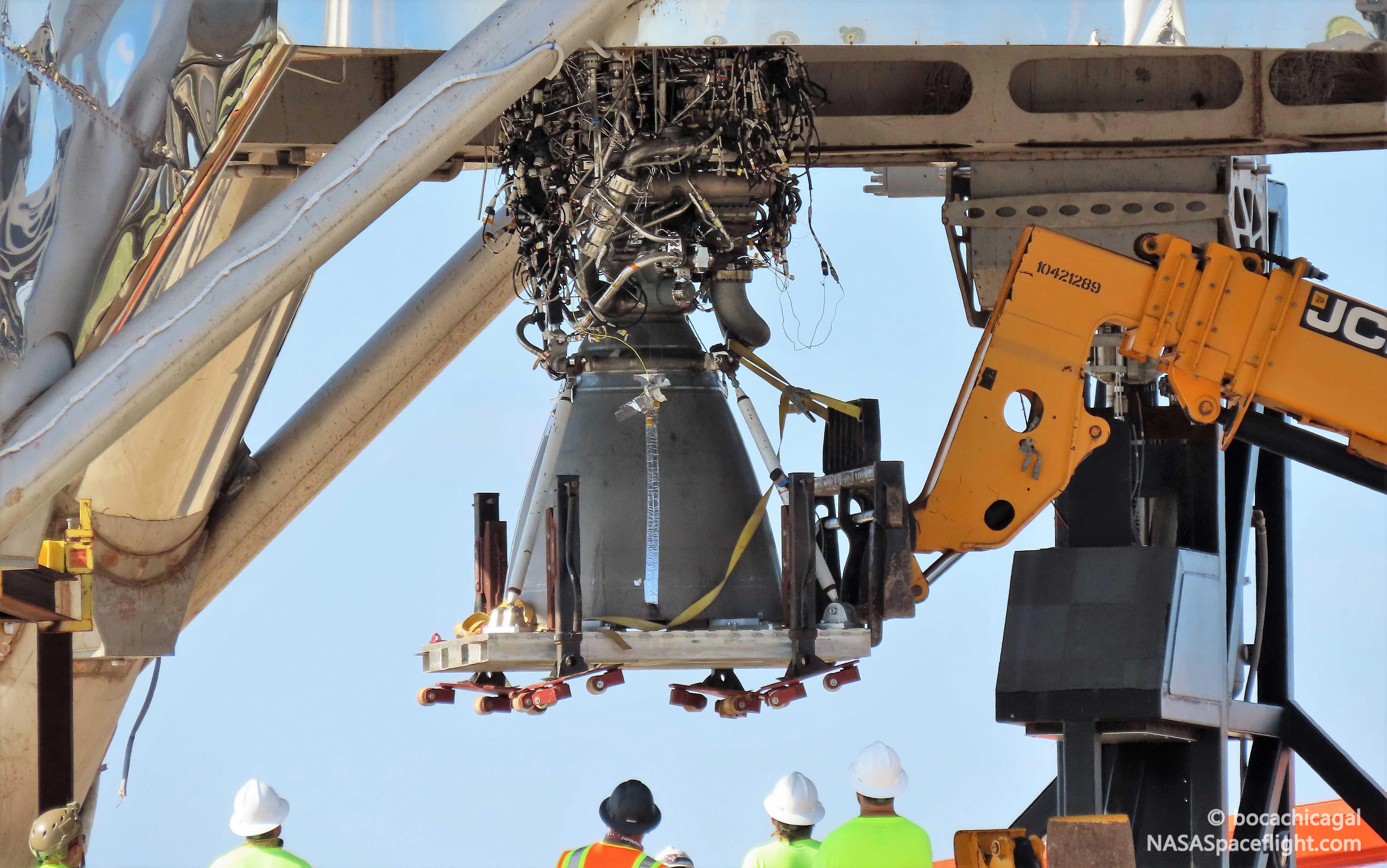 SpaceX technicians work to install Raptor SN06 on Starhopper, the third time a full-scale engine has been attached to the rocket testbed. (NASASpaceflight - bocachicagal, 07/11/19)

SpaceX technicians are now in the process of installing the engine – believed to be Raptor SN06 – on Starhopper, a low-fidelity prototype meant to act as a sort of flying testbed for Starship technologies and a mobile test stand for Raptor test fires. According to SpaceX CEO Elon Musk, if Raptor SN06 is installed, successfully checks out, and supports Starhopper’s first untethered hover test within the next 3-7 days, he will deliver an updated presentation on SpaceX’s Starhip/Super Heavy launch vehicle and (hopefully) the company’s plans for the Moon and Mars around the end of July.

This Raptor is the third to be installed on Starhopper. The first engine (SN02) was installed in March 2019 and became the first Raptor to ignite as part of a vehicle meant to eventually fly. During a duo of more or less successful test fires, Starhopper strained against its tethers, lifting a few inches off the ground. Although it did technically mark Starhopper’s inaugural hop, Raptor SN02 also suffered damage during the tests that demanded its removal.

As recently noted by observant fans after Musk revealed that SpaceX had been dealing with a “600 Hz” vibration issue, the horn-like noise during shutdown actually happens to be in the 600 Hz range, with an additional spike at 300 Hz a likely sign of an issue with acoustic and/or mechanical resonance. With SN06, SpaceX engineers and test/production technicians have managed to rapidly implement a fix for that undesirable resonance, powering through several successful static fires with durations as high as 80+ seconds, approaching the propellant storage limits of SpaceX’s McGregor test facilities.

Shortly after its static fire tests in Boca Chica, Raptor SN02 was removed. According to a source familiar with the test process, the engine was brought up to McGregor, TX and repaired before SpaceX technicians – urged by CEO Elon Musk – effectively ran the engine until it failed catastrophically. Some two months after its removal (early June), a new Raptor engine – this time believed to be Raptor SN04, effectively an inert test article – was installed on Starhopper for a handful of days.

SN04 was exclusively used to check fitment and verify Raptor’s thrust vector control (TVC) gumball capabilities – quite successfully, by all appearances. A few days after installation, it was removed and shipped elsewhere. Subsequently, Raptor SN05 was tested in McGregor with the hopes that it would be able to support the first Starhopper hover tests, but the vibration issue described by Musk caused damage or at least killed confidence that the engine (a single point of failure on Starhopper) was reliable enough to support hover tests.

Raptor SN06 thus entered our story, arriving at McGregor around July 4th. SpaceX’s world-class team of engineers and technicians demonstrated their famous speed and agility, firing up SN06 less than 24 hours after its arrival. This initial test showed nothing out of order and was followed by no less than 3-4 30-80-second static fire tests, all of which were more or less successful. Per Musk, things were looking good as of July 8th, and Raptor’s July 11th arrival at Boca Chica is a foolproof confirmation that the engine is healthy and ready for the Raptor family’s first true flight.