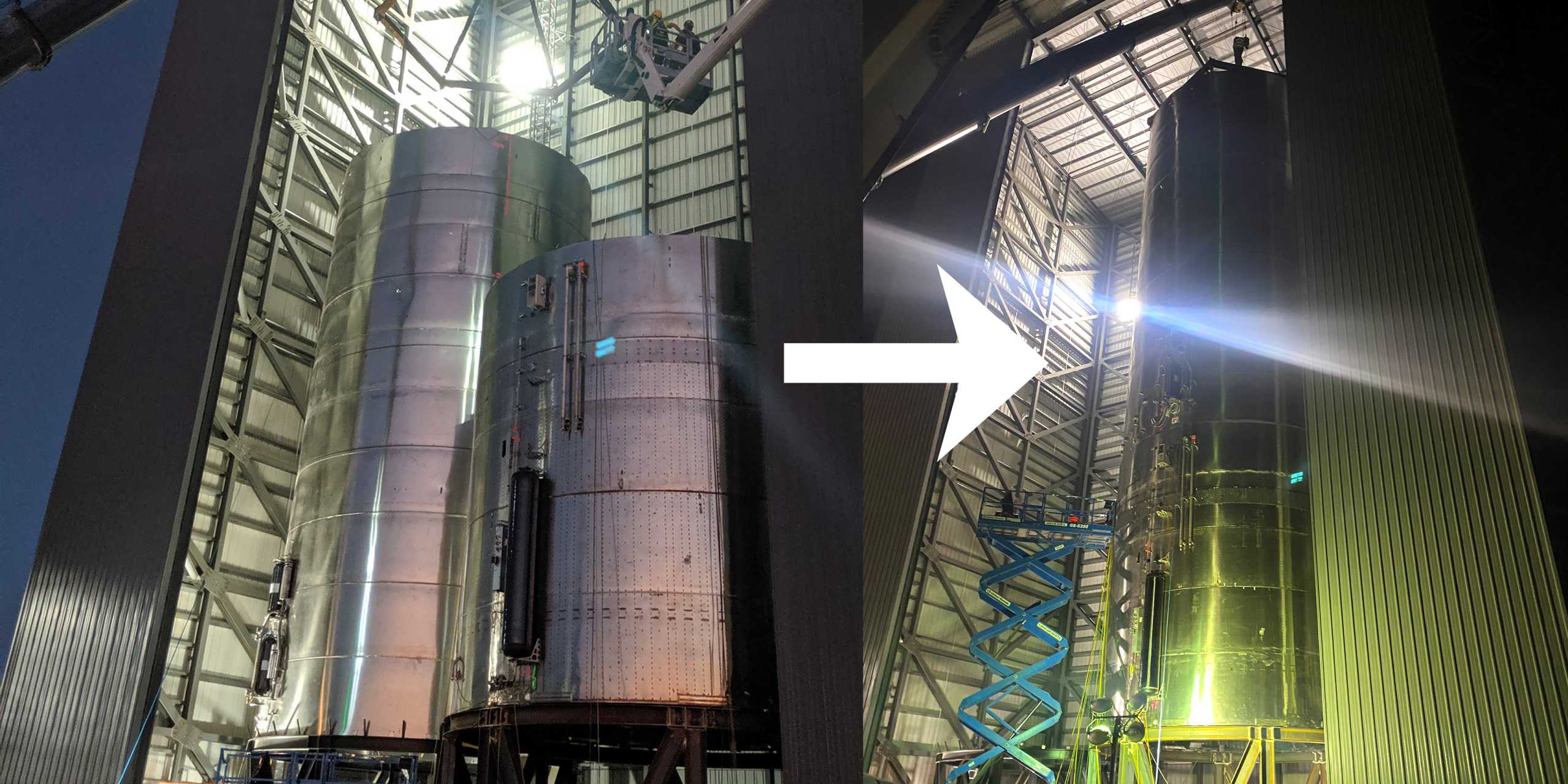 SpaceX has begun to upgrade its South Texas Starship launch pad in anticipation of the completion of the next full-scale rocket prototype, photos of which CEO Elon Musk revealed just hours ago.

Working in parallel with efforts to repair damage caused by Starship serial number 1’s (SN1) violent February 28th test failure, SpaceX has managed to build, complete, and test an entirely separate ‘test tank’ and complete fabrication of a second full-scale Starship in a handful of weeks. Flexing the growing capabilities of the impressive Boca Chica, Texas Starship factory SpaceX has sprung up in just three months, the company is working around the clock to build not just one – but several – Starship prototypes simultaneously.

A successful March 9th tank test designed to prove a new thrust structure design managed to do just that less than two weeks after the same faulty part brought about Starship SN1’s demise. In the two weeks since that its test completion, SpaceX has been busy welding, stacking, welding, and stacking several separate sections of the next Starship prototype, known as SN3. Potentially a matter of days away from structural completion, focus has recently shifted to the launch pad the ship will be tested at. In the last few days, SpaceX technicians have begun to install a bizarre, new structural element on the mount Starship SN3 will be secured on top of, hinting at the goals of the rocket’s first test campaign.

Squeezing in alongside efforts to repair the propellant lines that run into the launch mount, upgrades began on March 24th as a SpaceX team worked to install what looked like an incredibly sturdy tripod (with four ‘legs’, of course). Thanks to familiar testing done with SpaceX’s most recent Starship tank prototype, the purpose of the launch mount’s newest appendage quickly became clear.

During the Starship SN2 tank’s thrust structure (‘thrust puck’, per Elon Musk) test campaign, SpaceX debuted the concurrent use of a beefy hydraulic jack to simulate the forces a Raptor engine static might produce. Capable of producing upwards of 200 metric tons (440,000 lbf) of thrust at full power, SpaceX will likely begin Starship static fire tests with a single Raptor engine. As soon as a Starship prototype completes one or several single-engine test fires, the plan is to install three sea level-optimized Raptor engines and repeat static fire tests.

Before that triple-engine static fire milestone, a first for the cutting-edge Raptor engine, SpaceX needs to verify that Starship’s thrust structure can stand up to the ~600 tons (~1.3M lbf) of force it will be subjected to during such a test. Sitting on a much smaller stand, Starship SN2 used a single hydraulic jack and temporary stand to simulate a single engine’s thrust. Starship SN3, sitting much higher above the ground, will need three jacks to simulate three Raptors.

As such, it looks likely that Starship SN3’s first cryogenic tank proof test – filling the vehicle with inert liquid nitrogen – will coincide with a second dedicated stress test of a Starship thrust structure, hopefully proving itself capable of surviving the force of three Raptor engines at full thrust. While orbital-class Starships will need three more vacuum-optimized Raptor engines, three sea-level engines are all SpaceX needs to begin flight tests with suborbital prototypes.

Based on an unofficial analysis of existing photos, it appears that every single major structural piece of Starship SN3 – excluding legs and fins – is nearing completion, even including the ship’s shiny nosecone. Likely to head to the launch pad for its first tests as soon as the tank section alone has been completed, just one stacking event remains before said tank section reaches its full height. Right now, both of those parts have been moved to a dedicated Vehicle/Vertical Assembly Building (VAB) and are probably no more than a day or two away from being joined*. Perhaps just a day or two after that milestone, SpaceX will likely transport the massive rocket to the launch pad to begin preparing for its first proof tests.