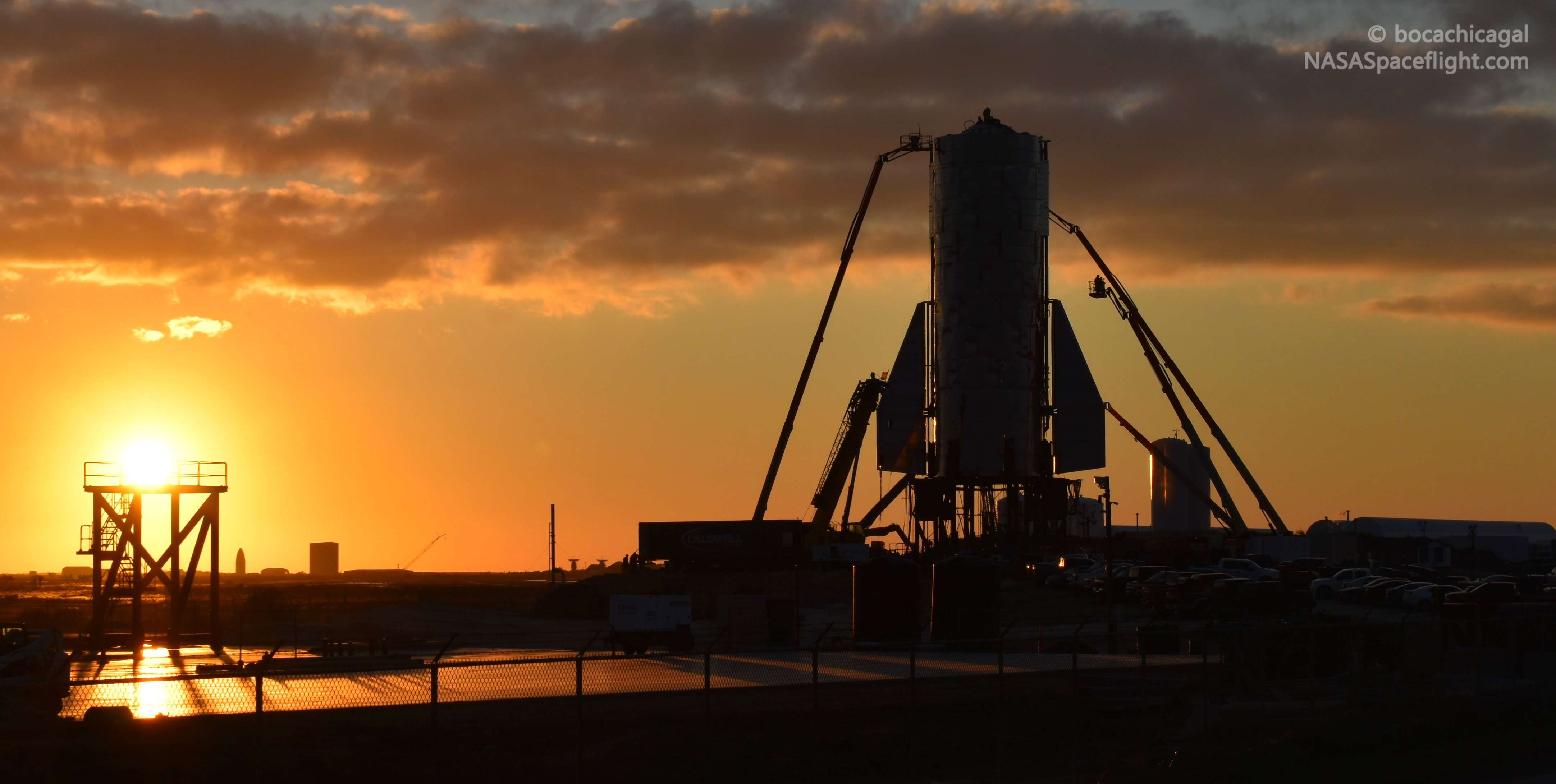 SpaceX’s South Texas Starship Mk1 prototype is on the verge of kicking off a critical period of ground tests, ranging from tank pressurization and propellant loading to the rocket’s first triple-Raptor engine static fire. The campaign could begin soon – perhaps as soon as later today, in fact.

Over the last two weeks, SpaceX’s South Texas team has faced bad winter weather, among the many other challenges associated with building giant rockets almost entirely out in the elements. Nevertheless, company technicians and engineers continue to check off task after task along the path towards Starship Mk1 completion, the next-generation launch vehicle’s first full-scale, high-fidelity prototype.

In the month of November alone, SpaceX has (re)installed Starship Mk1’s nose and aft section flaps (this time outfitted with heavy-duty actuator mechanisms), nearly completed the process of routing and integrating the vehicle’s external liquid and gas plumbing, and more or less finished a barebones launch mount. Starship Mk1 was snugly attached atop that launch mount around the start of the month and workers have continuously swarmed around the rocket and pad in scissor and boom lifts and ever since, closing out umbilical connections, insulating cryogenic propellant pipes, and much, much more.

Within the last week or so, SpaceX has apparently also begun the process of expanding its presence around its existing Boca Chica pad facilities, where Starship Mk1 is preparing for testing. The purpose of that expansion is unclear, but the first phase – extending the existing square landing pad – is essentially complete and will presumably give Starship Mk1 a better chance of successfully landing in the event that its first skydiver-style landing attempt is not as accurate as predicted.

Based on official renders/mockups in SpaceX’s updated 2019 launch animation, it could also eventually become the foundation of a much more permanent integration and processing hangar, much like the hangars that SpaceX uses to integrate Falcon 9 and Heavy at its Florida and California launch sites. It could even be the foundation for a dramatically larger Super Heavy-class launch mount and water-cooled flame deflector like the one shown in that same video. For now, Starship Mk1 will begin testing (and presumably first flights) off of a minimal steel mount that was built up from almost nothing in barely two months.

No nose, no problem?

As previously discussed on Teslarati, the testing Starship Mk1 is preparing for could take a number of routes to completion, but all of those routes will likely involve several main events. First, SpaceX may or may not decide to do a preliminary tank proof test with neutral (i.e. non-explosive) liquid nitrogen, which would verify the structural integrity and determine if there are leaks in what is essentially a building-sized pressure vessel.

SpaceX may instead skip that – it would require a vast and unwieldy quantity of liquid nitrogen – and move directly into the first cryogenic propellant loading test, in which SpaceX would attempt to fully fill Starship’s tanks with liquid oxygen and liquid methane. Assuming Starship Mk1 is 1:1 scale, that could involve as much as 1200 metric tons (2,650,000 lbs) of propellant, more than twice as much fuel as a Falcon 9.

In other words, Starship’s inaugural propellant loading attempt will be almost at the same scale as Falcon Heavy’s, which took several attempts, broke some hardware, and was a major learning experience and challenge on its own. A structural failure or explosion could be absolutely catastrophic, as those ~1200 tons of fuel and oxidizer could act as a massive bomb under the right conditions.

According to road closure notices published by Cameron County, SpaceX is expected to begin operations that require road closures as early as November 18th from noon to 8 pm CST, with backups on the 19th and 20th. Another window opens on the 25th at the same time, with backups on the 26th and 27th. To be clear, there is no official word that SpaceX actually means to start cryogenic ground testing with Starship Mk1 today, but it’s not necessarily out of the question.

Whenever SpaceX does decide to start Starship Mk1 ground testing, it will be an immensely important milestone, signifying the start of the period that will essentially determine whether SpaceX’s deeply unusual manufacturing methods can build a structurally-sound, high-performance rocket prototype for pennies on the dollar. In simple terms, if Starship Mk1 behaves as planned, commercial spaceflight may never be the same.