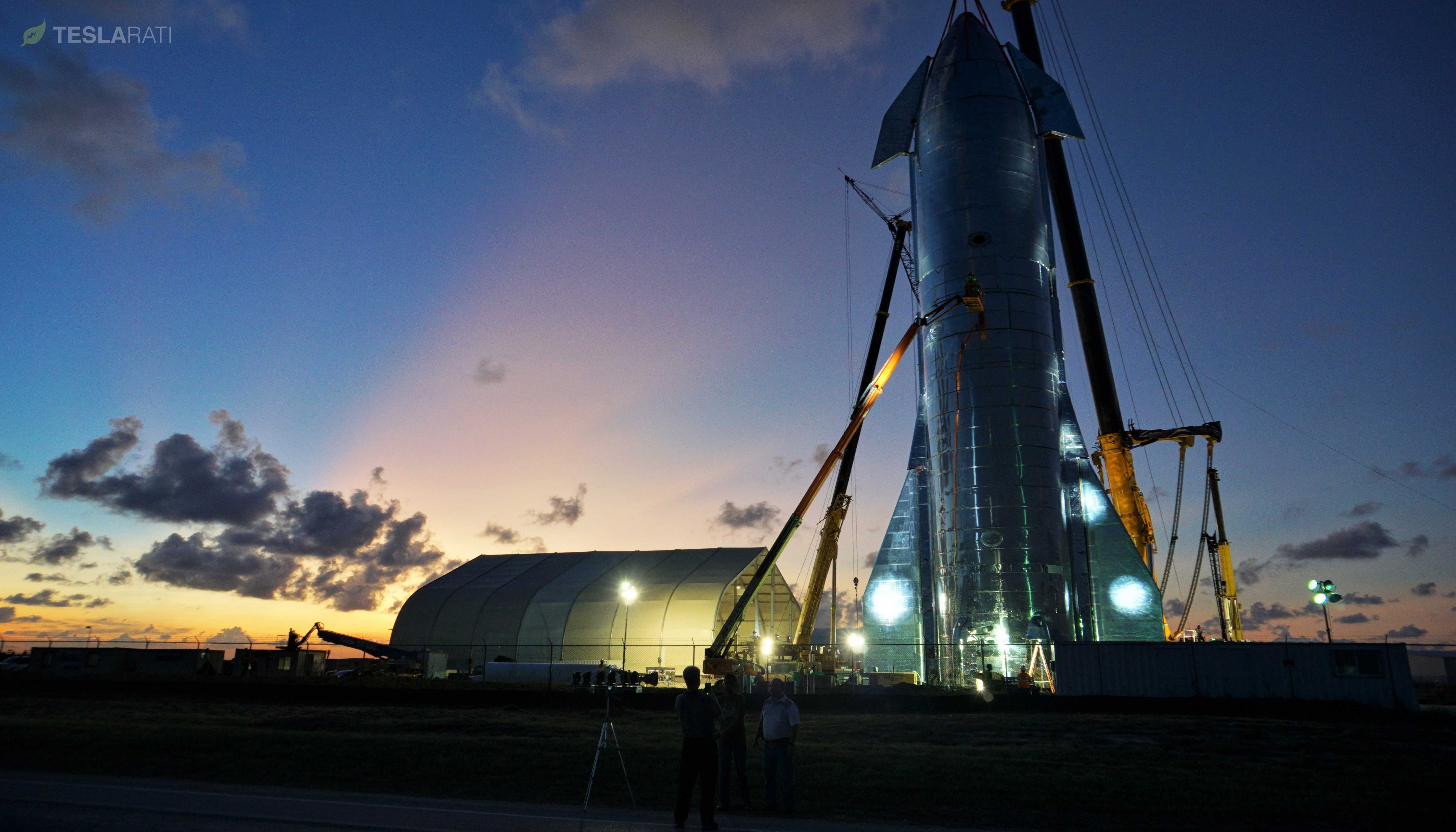 Starship Mk1 is pictured here on September 27th, less than half a day after technicians stacked the prototype's two halves. (Teslarati - Eric Ralph)

A senior SpaceX director says that the Starship Mk1 prototype could lift off for the first time before the end of 2019, a flight debut SpaceX hopes will successfully demonstrate the next-generation spacecraft’s exotic ‘skydiver’ landing method.

SpaceX is in the late stages of building the first full-scale Starship prototypes, known as Mk1 (situated in Boca Chica, Texas) and Mk2 (Cocoa, Florida). The Texas-based Mk1 prototype is by far the furthest along and featured prominently at CEO Elon Musk’s Starship update presentation on September 28th, having been stacked to its final height of ~50m (165 ft) for the first time just days prior.

It’s clear now that more than a little showmanship was involved in the work that lead up to Starship Mk1’s unveiling. Within a week or two of the event, SpaceX technicians had separated Starship’s nose and tail sections, removed all three Raptor engines, and uninstalled the ship’s wings and canards, among other things.

Aside from the nose and tail section demate and removal of flaps, canards, and Raptors, the aero covers that were briefly attached to Starship’s exterior (raceways, canards, flaps, legs) were also removed. One raceway cover may or may not have been a casualty of high winds but all of the above hardware was carefully stored on the ground surrounding Starship Mk1 and is clearly meant to be installed more permanently in the coming weeks.

Nevertheless, Starship Mk1 obviously has a decent ways to go before it can be seriously considered flight-ready. On a positive note, aside from several days spent undressing Starship, SpaceX’s South Texas team (and others traveling from Florida and California) have been working 24/7 in the weeks since Musk’s presentation.

The last two weeks of Starship Mk1 activity have centered around installing the numerous crucial bits and pieces the rocket will need to function. This has included thousands of feet of power cables, avionics wiring, and propellant feed and transfer pipes; industrial-scale power controllers and flight computers, and much more.

The sheer quantity and range of sizes of piping being installed on Starship Mk1 all but confirms that the rocket will be a high-fidelity prototype capable of testing a wide range of capabilities related to autogenous pressurization and Raptor engine ignition. The mirrored presence of three sets of smaller pipes on the vehicle’s raceway (essentially a utility corridor) is a strong sign that Raptor and Starship’s smaller header tanks and COPVs (located in Mk1’s nose section) are closely related.

Some of the excess hot gas produced by Raptor may be tapped to supply COPVs that can then be used to reignite the engines in-flight. More likely, the small pipes are more of a one-way feed line from Starship’s header tanks to its Raptor engines and – as Musk has indicated – the cryogenic liquid propellant in those header tanks will be gasified with electric heaters or gas generators.

Given all of the above, close followers were already readily aware of the fact that Starship Mk1 needed some significant work done before it would be ready for flight. On October 22nd, SpaceX Senior Director Gary Henry confirmed these suspicions, indicating that Starship Mk1’s 20 km (12 mi) flight test debut was now scheduled no earlier than two months from now (December 2019).

According to CEO Elon Musk and other SpaceX engineers, that 20 km flight debut is designed to prove that Starship’s radical new approach to flight and landing is viable. Musk has repeatedly described that Starship will in no way be an actual space plane and has stated that its ‘wings’ and ‘canards’ are not intended to be airfoils or wings. Instead, Starship will reenter Earth’s atmosphere, slow its horizontal velocity to near-zero, and proceed to free-fall straight down, using its fore and aft flaps to control its trajectory in the same way that skydivers use their body and limbs.

This bizarre approach will be capped off with an aggressive landing maneuver in which Starship will ignite its engines, wildly thrust-vector and swerve to cancel out the horizontal velocity imparted by that sideways ignition, and land vertically on Earth (or Mars). In theory, this strategy will radically reduce the amount of fuel Starship needs to land in atmospheres, but it’s far removed from anything SpaceX has attempted with Falcon 9 and Starship Mk1’s first flight will hopefully prove it to be a viable solution.