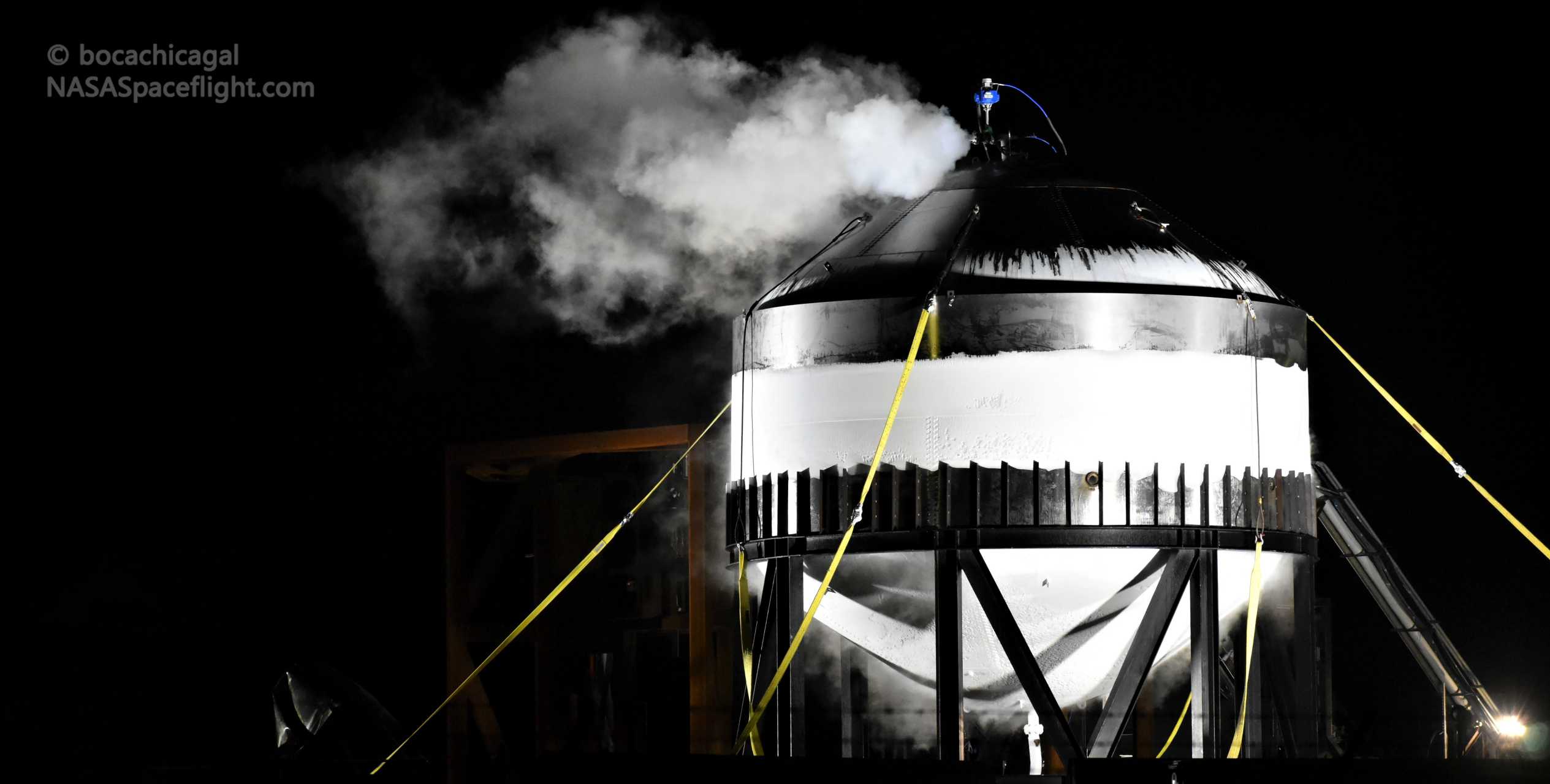 SpaceX's second Starship 'test tank' is pictured here shortly before it was successful pressurized until it exploded. (NASASpaceflight - bocachicagal)

SpaceX has successfully repaired a leak in a Starship prototype, filled the giant tank with an ultra-cold liquid, and pressurized it until it (spectacularly) popped — and Elon Musk has the preliminary results.

Designed to determine the quality and capabilities of SpaceX’s current manufacturing and integration procedures, the company technically performed its first explosive Starship test back in November 2019, when it decided that the first full-scale prototype – Starship Mk1 – was not fit to fly. Instead of entering the final stages of assembly with a vehicle that SpaceX simply couldn’t be sure would survive the rigors of even a low-stress flight test, the massive vehicle’s tank section was installed at the company’s South Texas launch facilities and pressurized with liquid nitrogen until it burst.

Built almost entirely unprotected on the South Texas coast, Starship Mk1 simply wasn’t up to the standards needed for SpaceX to trust that the giant rocket would survive the stresses of flight. Much like Falcon 9, Starship and its Super Heavy booster will be structurally stable while their tanks are empty, but a great deal of additional (and absolutely critical) structural strength will be added by pressurizing those tanks with a combination of liquid and gaseous propellant. Achieving the required pressures, however, can be a major challenge and the purpose of test tanks like the one above is to prove that the company is up to the challenge. According to Elon Musk, after tonight’s test, SpaceX almost certainly is.

In all truthfulness, the real start of explosive Starship pressure testing actually happened all the way back in 2017 when SpaceX intentionally pressurized a vast 12m-diameter (40 ft) carbon composite tank until it popped. Back then, Starship was known as Big Falcon Rocket (BFR) and was designed to use carbon fiber composites for nearly all of its structure — propellant tanks included.

According to CEO Elon Musk, said carbon composite tank met SpaceX’s expectations (i.e. the necessary pressures for flight) and was pushed to 2.3 bar (33 psi) before it burst in a rather spectacular fashion, launching almost 100 m (300 ft) into the air. Around 2.5 years after that test, it’s believed that Starship Mk1 reached something like 3-5 bar before it popped, and Musk recently revealed that the new steel Starship and Super Heavy designs will require tanks pressures of at least 6 bar (90 psi) to survive the stresses of orbital flight.

Thankfully, although Starship Mk1 didn’t achieve those necessary pressures, the prototype was effectively a worst-case scenario for manufacturing and assembly, revealing the rather unsurprising reality that SpaceX needed to improve its uniquely sparse methods of production and assembly. Although the stainless steel SpaceX settled on for Starship is much more tolerant than aluminum or most other metals when it comes to welding, steel welds still suffer if exposed to more than a minor breeze, as wind will cause the welded metal to cool less than uniformly.

With the latest series of steel Starship tank prototypes, SpaceX has significantly improved its production infrastructure, finally offering at least a semblance of protection against the elements. Based on the first test tank’s explosive performance on January 10th, those improvements have paid dividends. According to Musk, test tank #1 made it all the way to 7.1 bar (105 psi) before it burst and test tank #2 reportedly did even better.

Meanwhile, SpaceX’s South Texas team has already finished and partially tested a second Starship test tank, ultimately reaching 7.5 bar with water before a small leak sprung on January 27th. Over the last 24 hours, technicians have worked to repair the apparently minor damage and began filling the Starship tank with ultra-cold liquid nitrogen (boiling point: -196°C / -320°F) around 5:30 pm CST (23:30 UTC) on January 28th. After filling with liquid nitrogen, SpaceX kept the steel tank topped off for several hours. The likely purpose behind that otherwise odd move: something called cryogenic hardening. By exposing certain types of steel to liquid nitrogen temperatures, the material can be dramatically strengthened in some regards.

Around four hours after Tuesday evening’s testing began, the Starship tank prototype appeared to develop a significant leak in its upper dome, hemorrhaging liquid nitrogen that immediately produced large clouds after coming into contact with the South Texas air. As it turns out, whatever was observed was almost certainly not a leak: 30 or so minutes later, the tank was pressurized to failure, releasing a spectacular tidal wave of liquid nitrogen that doused the surrounding area, temporarily killing nearby floodlights and creating a near-zero-visibility storm of fog.

We’ll have to wait for dawn tomorrow to see the extent of the damage, but it appears that Test Tank #2’s demise was dramatically more violent than its predecessor — a largely expected side effect of performing the pressure test with a cryogenic liquid. In fact, just minutes after it appeared to fail, Elon Musk revealed that the second test tank had burst around 8.5 bar (~125 psi), soundly trouncing all records set by earlier tests and suggesting SpaceX is unequivocally ready to begin building the first orbital Starships. Critically, Musk had previously indicated that if Starship’s tanks could survive up to 8.5 bar, SpaceX would have the minimum safety margins it needs to deem Starship safe enough for astronauts.

In other words, if Test Tank #2 really did reach 8.5 bar, SpaceX has effectively solved the biggest structural engineering challenge its Starship program faces, kicking the doors wide open for the more or less immediate mass-production of the first giant orbital-class spacecraft. As it turns out, what Musk has deemed as the first “orbital” Starship prototype – ‘SN01’ – is already under construction, and it’s safe to say that any lessons learned from January 28th’s cryogenic pressure test will be fed back into SN01 and all future prototypes.