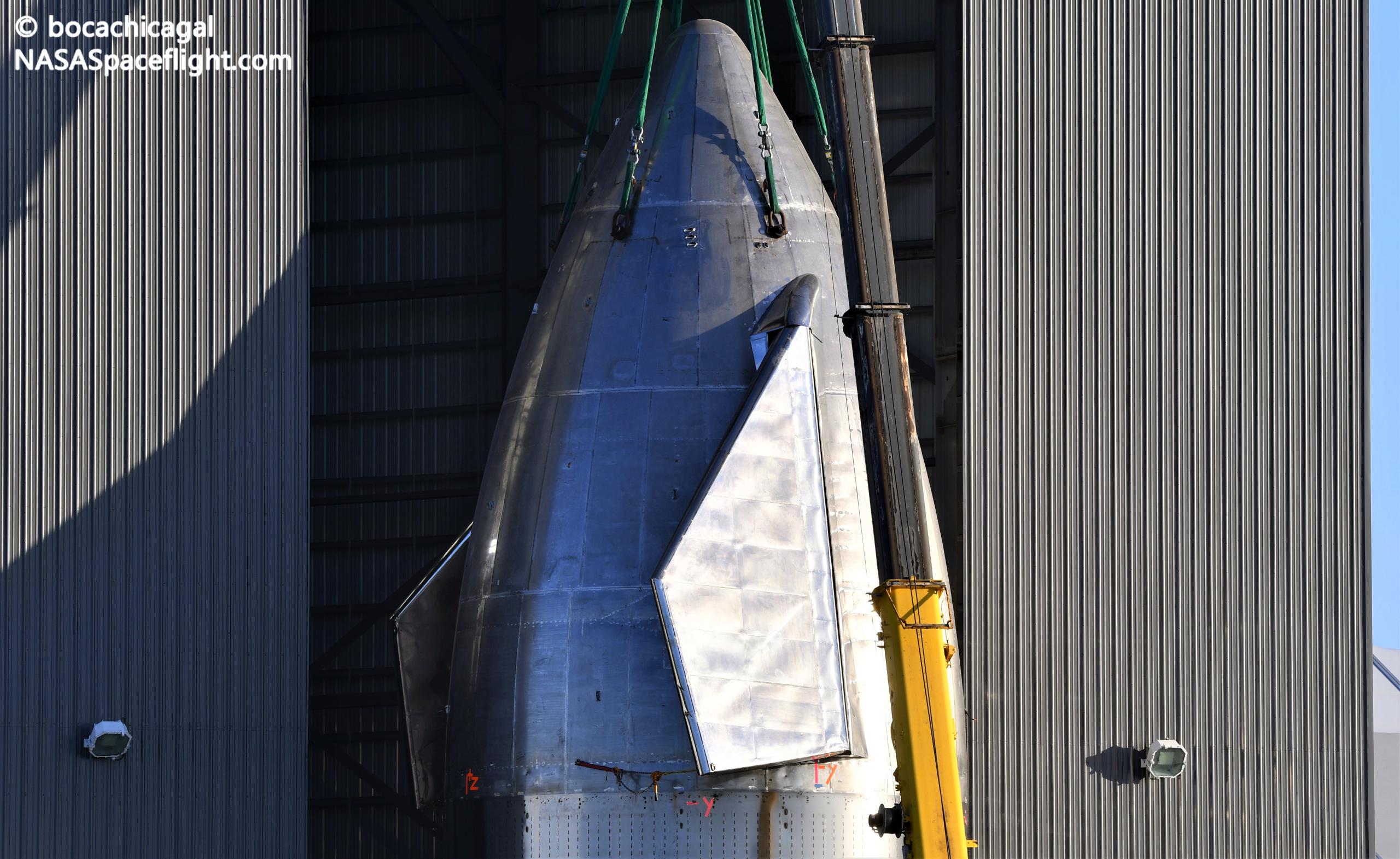 Starship SN8's nosecone was recently stacked and welded atop a barrel section in the last major step before installation on the rocket itself. (NASASpaceflight - bocachicagal)

SpaceX CEO Elon Musk has confirmed that Starship and Raptor’s first triple-engine static fire was a success, opening the door for nosecone installation.

Around 3:13 am CDT, October 20th, Starship serial number 8 (SN8) successfully fired up three Raptor engines less than two hours after completing the first successful three-engine preburner test. With zero direct human intervention, SpaceX remotely detanked the rocket’s cryogenic liquid methane and oxygen propellant – the remnants now too warm to be used again in a controlled manner. In an hour or less, SpaceX engineers combed through the data produced and concluded that all three Raptor engines were healthy after their partial ignition test.

Effectively reset to a stable state, SpaceX once again proceeded to load Starship SN8’s propellant tanks with a small amount of supercooled LOx and LCH4, almost exactly mirroring the preburner test. Around 50 minutes after the recycle commenced and 25 minutes after propellant loading kicked off, Starship SN8 ignited three Raptors simultaneously – a major milestone for any rocket engine. Static fire now completed, Starship SN8 has been cleared to become the first operational prototype to reach its full 50m (~165 ft) height.

Shortly before Musk confirmed SN8’s static fire success, SpaceX canceled a preexisting October 20th static fire window and scheduled several new road closures on Wednesday, October 21st. Unlike the company’s recent static fire closures, all but one of which ran from 9pm to 6am, SpaceX’s new Wednesday closures are scheduled from 7am to noon and 3pm to 5pm local (CDT).

While a minor data point, in context with Starship SN8’s static fire success, the closures alone made it clear that SpaceX planned to begin installing Starship SN8’s nosecone on October 21st. Musk confirmed that assumption a few hours after those road closures were published.

It’s not entirely clear but most observers are assuming that Wednesday’s 7am-12pm window is needed to transport a large, new crane the ~2 miles between SpaceX’s Boca Chica factory and launch facilities. Starship SN8’s stacked nose section would then likely be installed on the same self-propelled mobile transporters (SPMT) and rolled to the launch pad from 3pm to 5pm, after which the nose would be lifted and stacked atop Starship SN8.

SpaceX has only fully stacked a Starship prototype once before when Mk1’s nose section was temporarily mated to its tank section to be the centerpiece of CEO Elon Musk’s October 2019 Starship event. It’s unclear why SpaceX wouldn’t simply use one of the mobile cranes its rented for Starship tank section operations (and stacking Mk1) in the past, so it remains to be seen what Wednesday’s road closures will actually be used for.

SpaceX’s road closure plans end with a wildcard, however. Once installed, the plan is to perform a second triple-Raptor static fire while only drawing propellant from SN8’s header tanks – small internal tanks designed to hold landing propellant, one of which is situated at the tip of Starship’s nosecone. On October 21st and 22nd, SpaceX still has two 9pm-6am closures scheduled for “SN8 static fire” testing. Filed early on October 20th, before SN8’s successful static fire, the most likely explanation is a simple clerical error or miscommunication, with Cameron County or SpaceX failing to properly communicate that those subsequent static fire test windows are no longer needed.

If retaining the static fire closures was intentional, it would mean that SpaceX – likely at Musk’s urging – intends to install Starship SN8’s nosecone in a matter of hours. It’s almost inconceivable that Starship SN8’s nosecone – outfitted with multiple gas thrusters, forward flaps powered by Tesla motors, a liquid oxygen header tank, vents, and plenty of plumbing – can be installed and made ready for testing in less than 12 hours. Barring a surprise method of mating SN8’s nose and tank sections, the nosecone will have to be welded to the rest of SN8 and the weld inspected – typically a multi-day process.

Regardless, given how quickly SpaceX moves and how dead-set CEO Elon Musk is at pushing limits and breaking barriers, it seems reasonable to assume that Starship SN8 may be fully integrated and ready for a second static fire test just a handful of days from now. Once completed, SN8 will be ready to attempt Starship’s first high-altitude flight test, launching to ~15 km (~9.3 mi) to attempt an untested skydiver-style descent and landing.