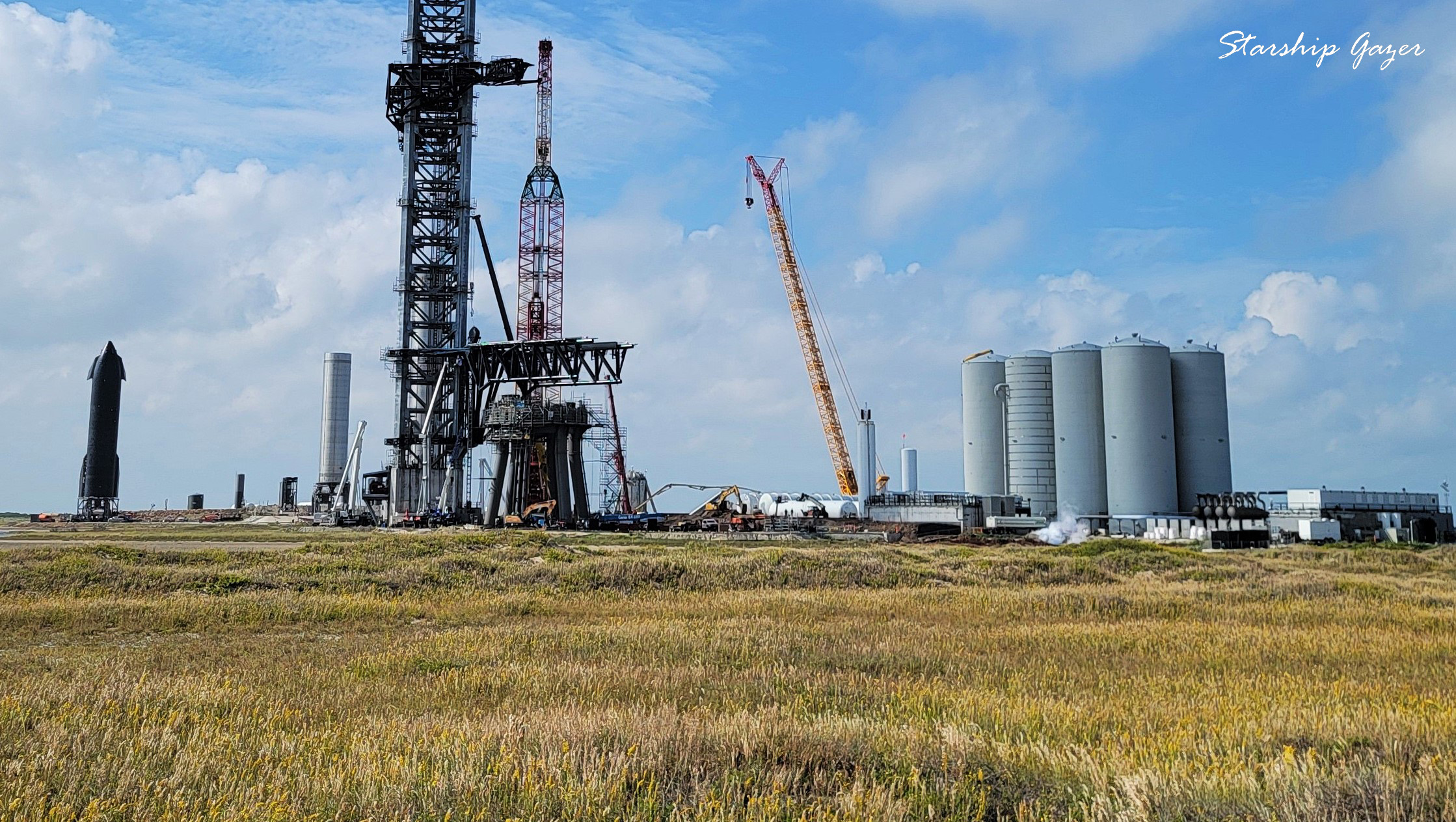 Less than a year after tank farm assembly began in South Texas, SpaceX has begun the painstaking process of filling Starship’s first orbital launch site with thousands of tons of rocket propellant.

Comprised of seven giant custom-built tanks, the last of which SpaceX installed and ‘sleeved’ in mid-October, Starbase’s first orbital-class tank farm is a bit like the pad’s circulatory system and needs to store, chill, and distribute all the propellant needed for a rocket launch. To support Starship and Super Heavy, both the largest individual rocket stages and the largest integrated rocket ever built, its launch site and tank farm have to be equally immense. In classic SpaceX fashion, the company has strived to keep the costs of that tank farm low and its speed of construction high, resulting in a setup that’s fairly unique as far as launch pads go.

Perhaps nothing emphasizes the scale of Starship’s first orbital-class tank farm than the process of filling it with the supercool propellant and fluids its designed to hold.

In mid-September, SpaceX began delivering cryogenic fluids to Starbase’s orbital tank farm for the first time ever. Instead of propellant, dozens of tanker trucks delivered liquid nitrogen to one or two of the farm’s tanks between mid-September and mid-October. Altogether, around 40-60 truckloads was delivered – only enough to partially fill one tank. That liquid nitrogen also appeared to be piped into two of the farm’s three liquid oxygen tanks, meaning that it may have only been used to clean and proof test them.

Combined, the farm’s seven main tanks should be able to store roughly 2400 tons (5.3M lb) of liquid methane (LCH4), 5400 tons (12M lb) of liquid oxygen (LOx), and 2600 tons (5.7M lb) of liquid nitrogen (LN2). LCH4 and LOx are Starship’s propellant, while LN2 is needed to ‘subcool’ that propellant below its boiling point, significantly increasing its density and the mass of propellant Starships can store.

In recent weeks, LN2 deliveries have picked back up at the orbital tank farm, suggesting that more tanks are being cleaned and proofed. SpaceX may have also begun filling one or both of the farm’s dedicated LN2 tanks, though it’s hard to say for sure. More importantly, around October 17th, SpaceX began filling Starship’s orbital tank farm with liquid oxygen – real propellant – for the first time. Rather than a slow and cautious process, deliveries have streamed in almost daily ever since. As of November 4th, at least 74 tanker trucks have delivered LOx to the farm in 18 days.

Based on Department of Transportation (DOT) regulations that limit the gross weight of cryogenic tanker trucks to about 37 tons (~81,000 lb), each of those trucks has likely delivered around 20 tons (~45,000 lb) of LOx to Starbase. Altogether, that amounts to around 1500 tons (3.3M lb) delivered in less than three weeks – enough to fill about 80% of one of the farm’s three LOx tanks or a quarter of its total LOx storage capacity.

Based on data from AI-based tracker Starbase Deliveries, which can only count daytime deliveries, at least 134 tankers have delivered LCH4, LOx, or LN2 to Starbase’s orbital and suborbital launch sites between October 4th and November 4th – an average of 4.3 per day. At that rate, even if every delivery went to the orbital pad, it would take SpaceX nearly four months just to fill the orbital tank farm. Put simply, the facilities and logistics required to support even a single orbital Starship launch are gargantuan.