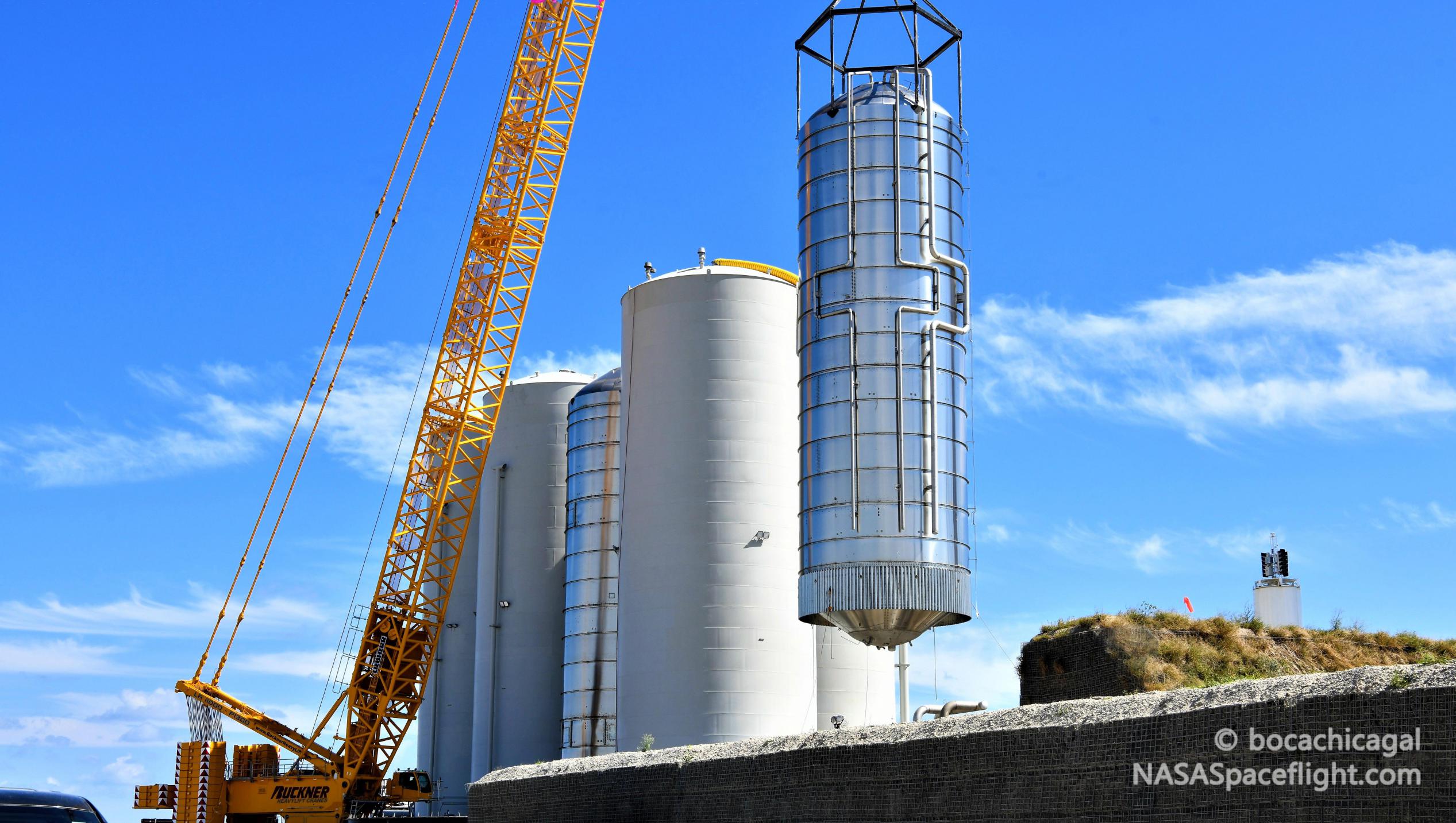 Built out of the same factory and parts as the steel tanks that make up most of the two-stage Starship rocket’s structure, SpaceX completed the first two of those ‘ground support equipment (GSE)’ tanks in April and wasted no time installing both at Starbase’s orbital launch site (OLS). However, after a strong start, GSE tank work seemingly halted for several months and it wasn’t until August that SpaceX first enclosed one of the then three installed tanks with a sleeve designed to insulate their cryogenic contents. Since then, progress has picked back up and SpaceX has built and installed another three (for a total of six) storage tanks over the last two months.

That work effectively culminated on September 7th with the transport of the farm’s seventh and final GSE tank from build site to launch pad.

Unintuitively known as GSE-8 after SpaceX chose to scrap one of the original seven planned tanks earlier this year, the company wasted no time installing it shortly after its two-mile trip down the highway. GSE-8 is the second of two liquid methane (LCH4) tanks now installed at the orbital launch site and joins another three liquid oxygen (LOx) and two liquid nitrogen (LN2) tanks for a total of seven.

Combined, the OLS tank farm should be able to store more than 2400 tons of LCH4 and 4000 tons of LOx, as well as 2600+ tons of LN2 to be used for ‘subcooling’ (and thus densifying) that propellant well below its boiling point. Ultimately, that means that despite the massive scale of Starbase’s first orbital-class tank farm, it will still only hold enough propellant for a single orbital Starship launch and have to be almost fully restocked after each flight.

Given the logistical nightmare of arranging something like 100+ tanker trucks for each tank farm ‘refill,’ a process that could easily take a week or more on its own, it should come as no surprise that SpaceX is also building a dedicated liquid oxygen and nitrogen plant adjacent to its Starbase factory. On top of liquid natural gas (LNG) refinery and tenuous plans to potentially tap local natural gas wells, SpaceX is clearly well aware of the logistical challenges of regular Starship launches.

While there are no clear signs of the inevitable permitting and environmental reviews it would require, it’s likely that SpaceX will eventually create a brief above or below-ground cryogenic pipeline connecting its propellant factory to Starbase’s orbital launch site(s). If or when implemented, that would allow SpaceX to resupply its two planned orbital tank farms with minimal effort or human intervention beyond the process of producing the propellant.

For the time being, SpaceX will likely rely on a slow but simple parade of tanker trucks to gradually fill its first orbital tank farm. Before even that process is possible, though, SpaceX will need to finish plumbing GSE-8 and several other tanks, install the last two insulative ‘cryoshells,’ and finally fill the annuli between all seven tanks and their shells with an insulative foam-like material known as perlite. Dozens of bags of perlite and several kilns (used to expand the material into low density insulation) are already distributed around the orbital tank farm.