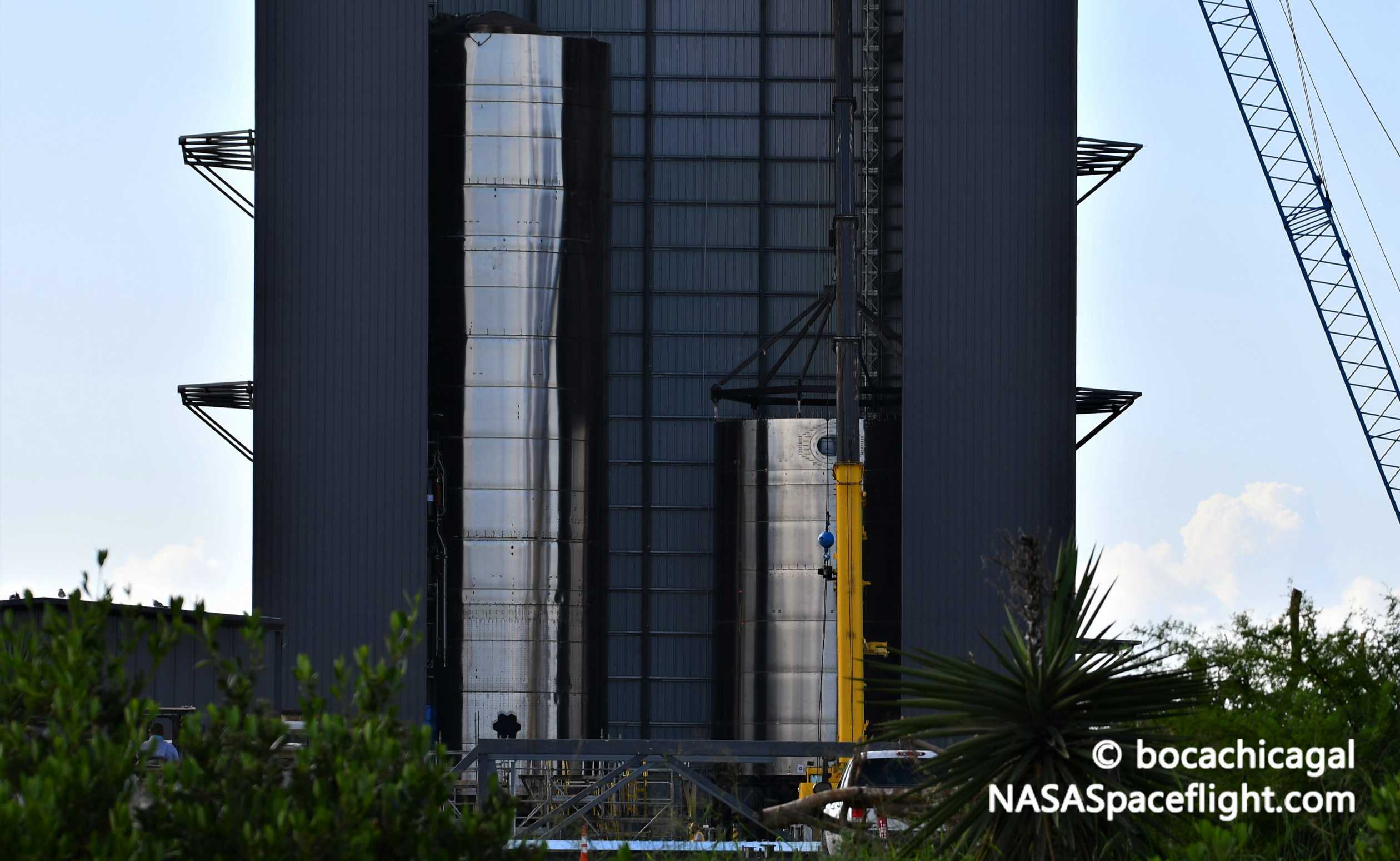 Less than a day after SpaceX successfully hopped a full-scale Starship prototype for the first time, the company has begun stacking the next rocket and Elon Musk is talking next steps.

Almost immediately after Starship SN5 took to the sky on a 150m (500 ft) hop debut, SpaceX CEO Elon Musk was talking about the company’s next near-term goals for the next-generation launch vehicle’s test program. To an extent, he had already offered a rough overview through various interviews and tweets over the last year or so. Aside from continuing to gradually refine Starship and Super Heavy designs and the processes used to manufacture and test those rockets, a few major proofs of concept stand between SpaceX and total confidence in the current architecture.

As far as basic rocketry goes, SpaceX’s 150m Starship hop has functionally proven that the company’s exotic, rule-of-thumb-breaking approach to Starship production and assembly can be feasibly refined into something capable of producing extraordinarily cheap orbital-class rockets. While a massive achievement, it doesn’t guarantee that the rockets produced will be reusable – let alone rapidly and easily reusable.

As of now, it can be safely stated that SpaceX has solved all major challenges involved in routinely and reliably landing and reusing orbital-class rocket boosters (first stages). It’s hard and surprises are always a possibility, but the landing records of Falcon 9 and Falcon Heavy boosters speak for themselves. For the colossal booster Starship needs to reach orbit, the Falcon family’s success means that Super Heavy recovery and reuse is more a question of “when” than “if”.

Starship, on the other hand, is going to offer many different challenges – some unprecedented for SpaceX and others unprecedented in the entire history of spaceflight. For Starship to be able to support a level of reuse compatible with what the Super Heavy booster is likely to achieve, SpaceX will have to create the biggest and most effortlessly reusable orbital-class spacecraft ever built.

Even heavier than NASA’s Space Shuttle orbiter, Starship will also rely almost entirely on the unproven technology of on-orbit cryogenic propellant transfer to reach beyond low Earth orbit (LEO). To survive orbital-velocity reentries while still being rapidly and cheaply reusable, Starship will further have to push the envelope of heat shield technologies. Last but certainly not least, in its current iteration, Starship relies on a truly unprecedented style of recovery to efficiently land back on Earth.

It’s this last bit where CEO Elon Musk’s recent comments and recent activity at SpaceX’s Starship factory come in. According to Musk, SpaceX intends to perform at least several more smaller hops (a la SN5) “to smooth out [the] launch process.” It’s unclear which prototype(s) will be involved in that series of hops but after SpaceX is satisfied with the state of launch operations, the plan is to “go high altitude with body flaps.” Based on past comments, it’s safe to assume that Musk is referring to a plan to launch a Starship to 20 km (~12 mi).

After reaching 20 km, Starship would orient itself belly down – a bit like a skydiver – and quite literally fall its way to ~1 km altitude before attempting an aggressive Raptor-powered pitch-over maneuver and last-second landing. By using Earth’s atmosphere much like a skydiver trying to slow down, Starship will theoretically be able to dramatically reduce the amount of propellant it needs to land.

That high-altitude launch and landing demonstration will also be the first time a Starship truly needs aerodynamic control surfaces (i.e. “body flaps”) to safely complete a flight test. According to NASASpaceflight.com info, Starship SN8 – also the first full-scale prototype to be built out of a different steel alloy – will be the first ship to receive functional flaps and a nosecone. If initial tests go according to plan, SN8 will also be the first ship to attempt a skydiver-style landing as described above. As far as full-scale aerodynamics goes, such a landing is loosely understood at best. For an orbital-class spacecraft, it’s even more of a wildcard.

Regardless, just hours after Starship SN5’s successful hop debut, SpaceX began stacking the first of several already finished Starship SN8 sections. Based on the assembly of past prototypes, the ship’s tank section could reach its full height just a few weeks from now, while subsequent nosecone and flap installations are uncharted territory.