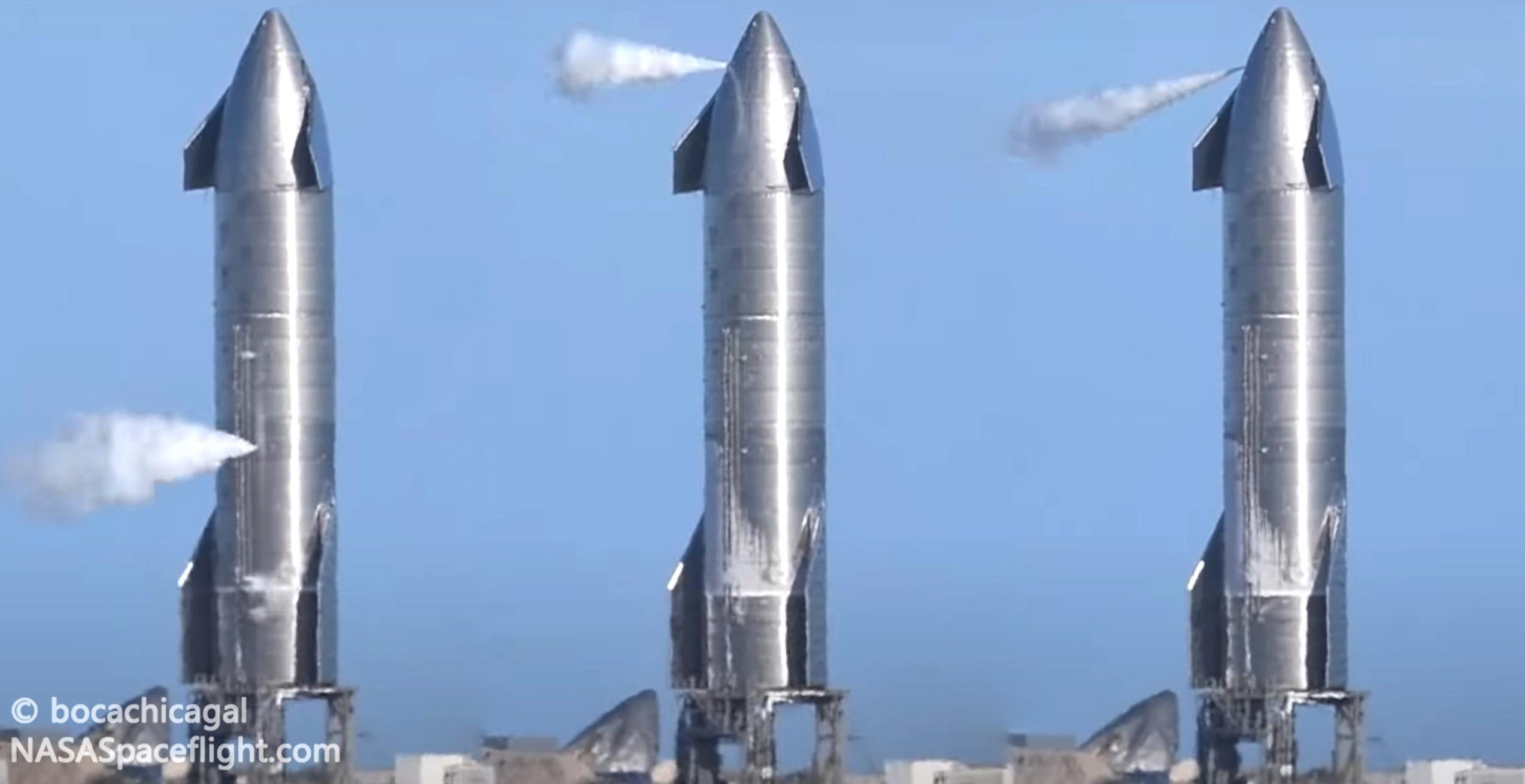 SpaceX’s next Starship gets frosty to prepare for first launch

Starship SN9 stands in front of Starship SN8's remains - yet to be fully cleared after an explosive but successful launch debut. (NASASpaceflight - bocachicagal)

One week after the rocket was rolled from the factory to the launch pad, SpaceX appears to have successfully put Starship serial number 9 (SN9) through two routine pre-launch tests.

On December 22nd, significantly less than two weeks after Starship SN9 suffered a significant handling or production accident that caused it to tip several degrees and impact the walls of its production facility, SpaceX wrapped up speedy repairs and transported the rocket about 1.5 miles down the road.

In some combination of a minor miracle and Starship’s exceptionally sturdy design, the rocket – standing ~50 meters (~165 ft) tall and weighing around 75 to 100 metric tons (175,000-220,000 lb) – tipped sideways onto two of its four pre-installed flaps. Despite being subjected to off-nominal forces, the far stronger structural mechanisms connecting those flaps to Starship’s main airframe were seemingly unharmed and SpaceX was able to remove and replace the crumpled control surfaces mere days after the incident.

On December 28th, that work began in earnest with what is generally known as an ambient temperature pressure test, filling Starship SN9’s propellant tanks with benign air-temperature nitrogen gas. Used to check for leaks, verify basic vehicle valve and plumbing performance, and ensure a basic level of structural integrity, SN9 appeared to pass its ambient proof test without issue – albeit late in the window.

Testing wrapped up on Monday shortly after the ambient proof and was followed by the main event – a cryogenic proof test – a bit less than a day later on Tuesday. The exterior of Starship SN9 began to develop a coating of frost after SpaceX started loading its oxygen and methane tanks with liquid nitrogen around 2:30 pm CST (UTC-6). While used similarly to verify structural integrity like an ambient pressure test, a ‘cryo proof’ adds the challenge of thermal stresses to ensure that Starship can safely load, hold, and offload supercool liquids.

In SN9’s case, it’s unclear if SpaceX fully or only partially loaded the rocket’s main propellant tanks with liquid nitrogen, while a lack of frost at the tip of its nose implies that the Starship’s smaller liquid oxygen ‘header’ tank wasn’t filled as part of the test. Altogether, Starship should be capable of holding roughly 1200 metric tons of liquid nitrogen if fully loaded.

The lack of SN9’s LOx header tank participation in Tuesday cryo proof testing is intriguing on its own, as it implies that SpaceX will either perform a second cryo proof later this week or is confident enough in LOx header tank and transfer tube performance to forgo any testing. In the latter case, SpaceX would likely just use the build-up to Starship SN9’s first Raptor static fire test as a wet dress rehearsal (WDR) and a cryo proof for the smaller tank system.

According to NASASpaceflight’s managing editor, if Monday and Tuesday’s ambient and cryo proof tests were as uneventful and successful as they seemed, SpaceX may move directly on to triple-Raptor static fire preparations. In a first, Starship SN9 was transported to the launch pad last week with two of three central Raptor engines already installed and had that missing third engine installed within a few days of arrival. SN9 is also the first Starship to attempt its first proof tests with any Raptor – let alone three – installed.

If SpaceX does move directly from cryo proof testing to a three-engine static fire, that will mark another first for the Starship program and signal growing confidence and a desire for speedier preflight tests – both of which will help accelerate flight testing. As of now, SpaceX has yet to cancel a road closure scheduled on Wednesday, December 30th but it’s far more likely that a trio of 8 am to 5 pm CST closures requested on January 4th, 5th, and 6th will host Starship SN9’s first static fire attempt(s). According to NASASpaceflight.com, Starship SN9 is expected to attempt a 12.5 km (~7.8 mi) launch similar or identical to SN8’s as early as a few days after that static fire. Stay tuned for updates!

SpaceX’s next Starship gets frosty to prepare for first launch