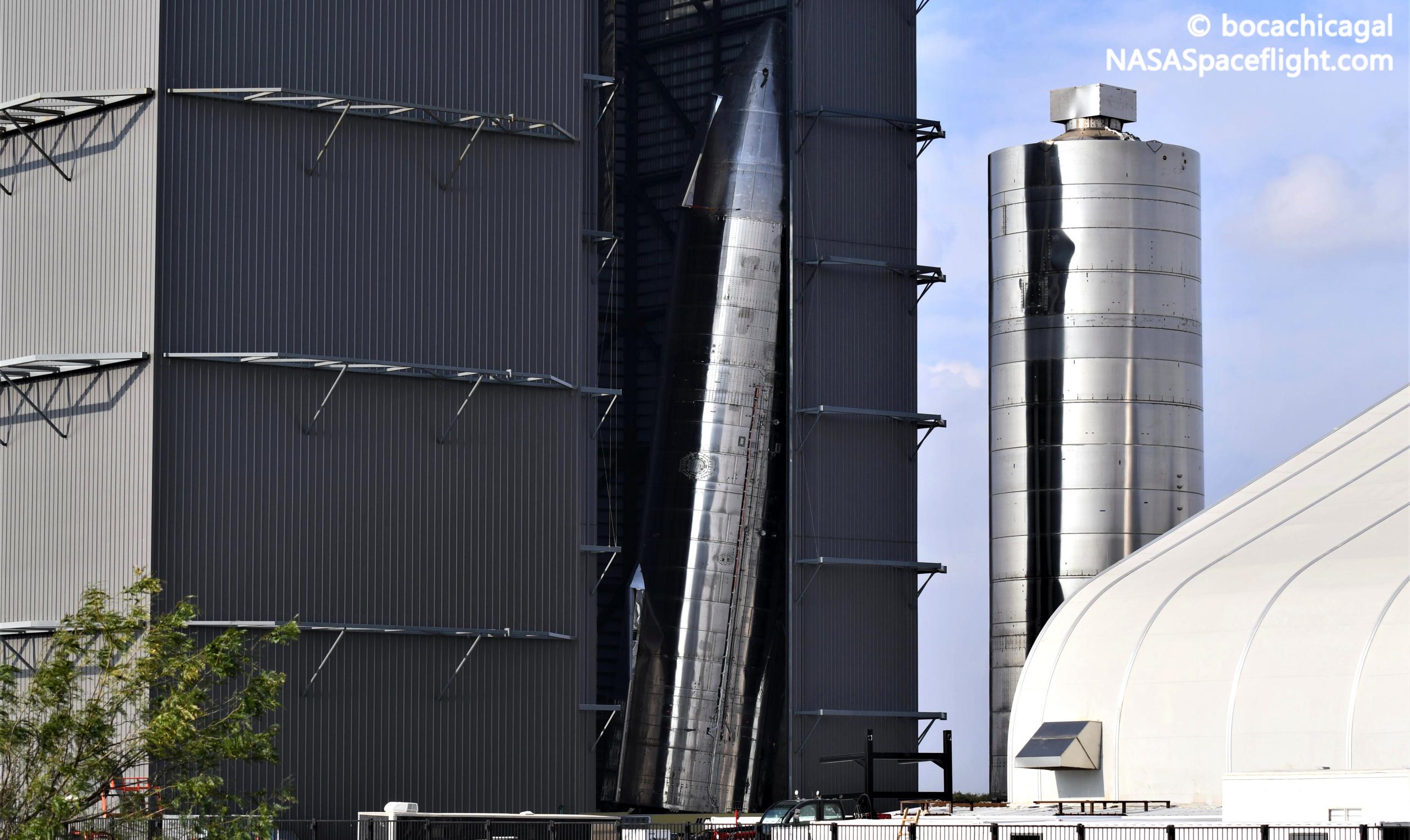 SpaceX almost drops finished Starship prototype – but it might be salvageable

Less than 48 hours after Starship SN8’s (successful) demise, something on or around a metal stand holding up SpaceX’s next completed Starship collapsed, causing the rocket to rapidly tilt sidewise and smash into the assembly building containing it.

Put simply, launch vehicles very rarely designed or expected to survive the kind of structural loads the fall and impact put Starship SN9 through and the early prognosis – prior to any up-close observation – was not not great. Weighing at least 50-70 metric tons (110,000-155,000 lb), any other rocket – and possibly even Starship itself – should have been damaged beyond repair from anything less than a minor bump.

Instead, Starship SN9 – fully assembled and perhaps just a few days away from a scheduled transport to the launch pad – shifted some 10 degrees (~10 m/30 ft) in a few seconds, seemingly coming to rest against scaffolding and the interior wall of SpaceX’s “high bay” assembly building. Had Starship fallen 180 degrees in the opposite direction, the results could have been catastrophic, potentially falling without a wall to stop it onto a Super Heavy booster section that could have had workers inside it. Luckily, the (hopeful) wakeup call was apparently benign, with SpaceX escaping loss of life or limb and avoiding any catastrophic damage.

Perhaps even worse, less than a day prior, a number of VIPs, SpaceX executives, investors, and even Elon Musk himself were touring the company’s Starship factory and standing feet away from SN9 itself. The most likely culprit of SN9’s fall may even be visible in photos taken by Steve Jurvetson, one such investor. In a few of those photos, Starship’s steel work stand – a staple of SpaceX’s Starship factories for ~18 months – appears to be precariously balanced upon five or six jacks with nothing more than gravity, SN9’s own mass, and some counterweights hold them together.

If those jacks – as they appear to be – weren’t bolted to the high bay’s concrete foundation or Starship SN9’s work stand, it could have been unintuitively easy to trigger a collapse like the one that occurred, perhaps requiring a minor bump with a forklift, a particularly extreme gust of wind, or some other kind of lateral force.

Regardless of why it happened, the end result was the same. Somewhat miraculously, Starship SN9 – as photos would soon show – appeared to be almost entirely unscathed, baring no obvious hull damage. The rocket’s fore and aft starboard flaps, however, were clearly crumpled. In fact, it’s possible that the crumpling of those largely empty, thin-skinned flaps acted just like the crumple zones designed into modern cars, essentially soaking up the energy of SN9’s impact with the wall and saving the rest of the rocket.

Still, the reality is that Starship SN9’s prognosis is still unlikely to be good, even if crumpling flaps seemingly prevented the rocket from becoming an unequivocal write-off. Depending on how strong SN9’s flaps were, the force of the impact could have easily been transferred into the structural hinges that connect them to Starship, warping internal stiffeners, the hinge mechanism itself, or even the entire curvature of its cylindrical steel hull.

If somehow limited to just the hinges or, even less likely, if the flaps took almost all of the impact energy, SN9 might be repairable. Even then, it’s unlikely that SpaceX will be able to hold to the schedule previously discussed on Teslarati, meaning that Starship SN9’s journey to the launch pad probably isn’t going to happen on Monday, December 14th. In the meantime, SpaceX will likely kick work on Starship SN10 – perhaps just a week or two behind SN9 – into full gear.

SpaceX almost drops finished Starship prototype – but it might be salvageable