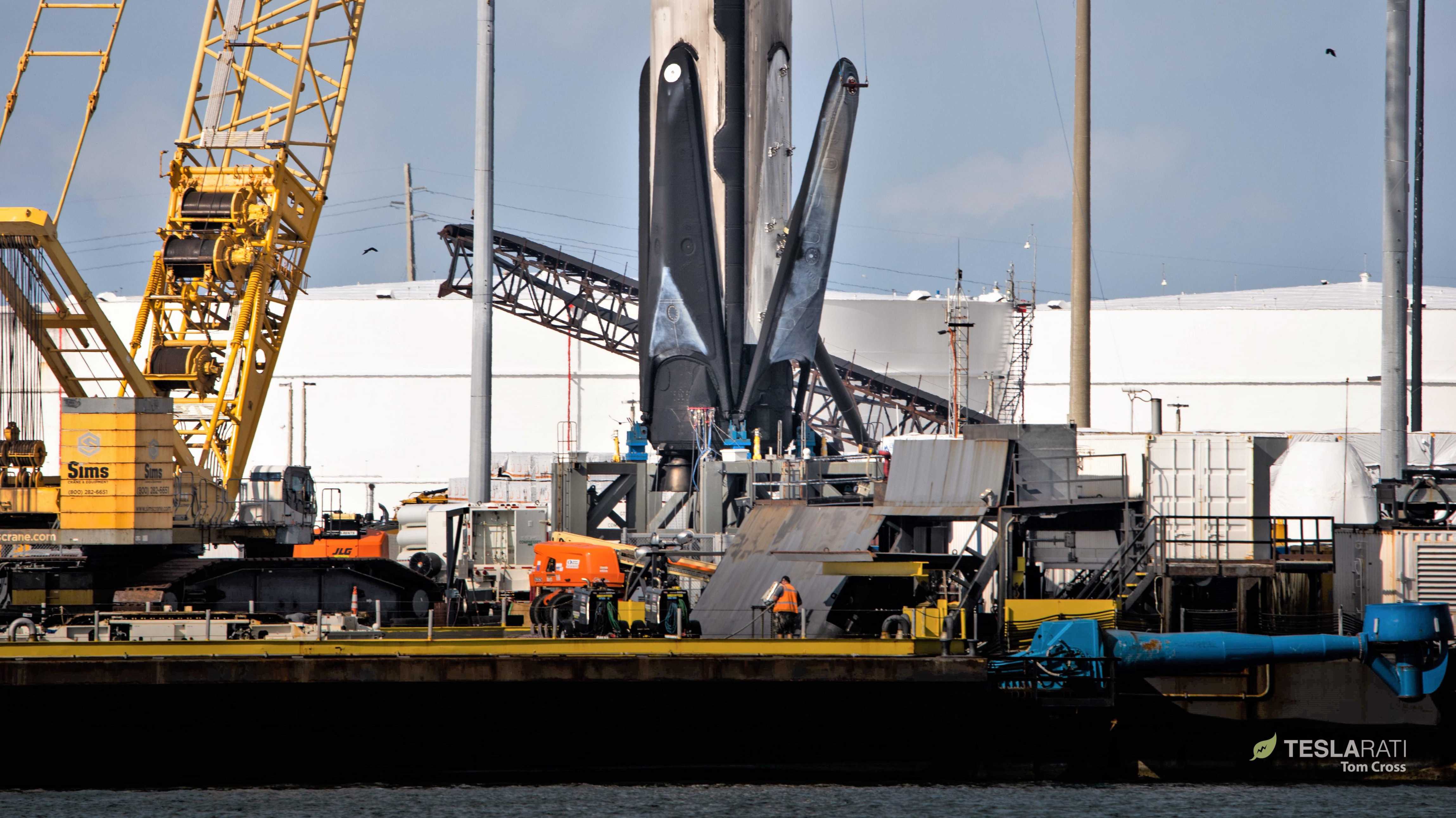 SpaceX appears to have selected Falcon 9 B1056 to become the first booster to have all four landing legs retracted and stowed. While relatively minor in the scope full Falcon 9 booster reuse, in-situ leg retraction could save SpaceX days of recovery and preflight work, a big help for truly rapid reusability.

A handful of prior retraction attempts have been made on Block 5 boosters but unknown issues prevented the process from taking hold. With some modifications to the legs and their deployment/retraction mechanisms, SpaceX seems to have solved those issues and is ready to graduate to a new level of rapid and easy rocket reusability. Teslarati photographer Tom Cross was on site in Port Canaveral, Florida when SpaceX began its first operational leg retractions and was able to capture photos and videos of the process.

The crux of the need for a relatively complex crane-and-jig method of leg retraction rests on SpaceX’s landing leg design. Put simply, after rapidly deploying with a combination of gravity and hydraulics, Falcon 9 landing legs have no built-in way to return to their stowed state. Each of the four legs are quite large, weighing around 600 kg (1300 lb) and stretching about 10m (33 ft) from hinge to tip. They use an intricate telescoping carbon fiber deployment mechanism to give the legs enough strength to stand up to the forces of Falcon 9 booster landings.

Combined, the legs’ size and telescoping mechanism makes the addition of an onboard retraction mechanism impractical. All the needed hardware would struggle to find a good place for installation and would quite literally be dead weight during launches and landings, stealing from Falcon 9/Heavy payload capacity and generally serving no purpose until a booster has been lifted off the ground with a giant crane.

As a result, SpaceX engineers instead decided to separate leg retraction hardware from the rocket itself and designed a custom crane jig. Pictured above, the jig attaches to Falcon 9’s interstage and allows the crane operator to lift the entire booster as needed. It also features four independent motors and pulleys that are meant to attach to a specific port on the outside of each booster landing leg. The jig then lifts the landing legs up, nominally retracting the telescoping deployment mechanism, at which point latches should be able to safely secure the legs to the booster’s body.

This has been significantly more difficult than expected, judging from a number of retraction attempts over the past six or so months. Falcon 9 Block 5 debuted in May 2018 – in fact, almost exactly one year ago – and SpaceX has since built 11 boosters that have supported 15 launches. SpaceX has thus taken ~12 months to get to a point where Falcon 9’s landing legs can be safely retracted, perhaps owing more to the fact that said legs are of minimal monetary value relative to the rest of a recovered booster. Improving leg retractibility is a bit of a luxury in that sense, as retracting legs offers little value proposition in terms of significantly lowering the cost of launch or reuse.

What leg retraction does do, however, is shave a significant amount of time off of the process of booster recovery and post-recovery processing. Instead of the normal process of totally dismantling and removing the legs piece by piece, stowing Falcon 9’s legs saves not only the time it takes to remove them but also the time it then takes to reinstall said legs for the next launch. At a minimum, this could save 12-24 hours of dedicated work, up to as much as several days according to CEO Elon Musk. Taken to the extreme, it’s likely that SpaceX’s ultimate goal is to lift a booster off the drone ship, retract its landing legs mid-air (or close), flip the booster horizontal, and lower it onto a transporter in one fluid movement.

If SpaceX can arrive at something approximating that in the near future, the company will be well on its way accomplish Musk’s goal of launching the same Falcon 9 booster twice in ~24 hours. Even further down the road, if or when SpaceX manages to optimize the reusability of its Falcon 9 boosters to the extent that almost zero refurbishment or in-depth inspection is needed between launches, minimizing the amount of human effort that goes into something as basic as preparing landing legs may actually have a significant impact on launch costs. For the time being, we get to enjoy the new and unusual spectacle of a giant reusable booster carefully stowing its landing legs for another launch attempt.