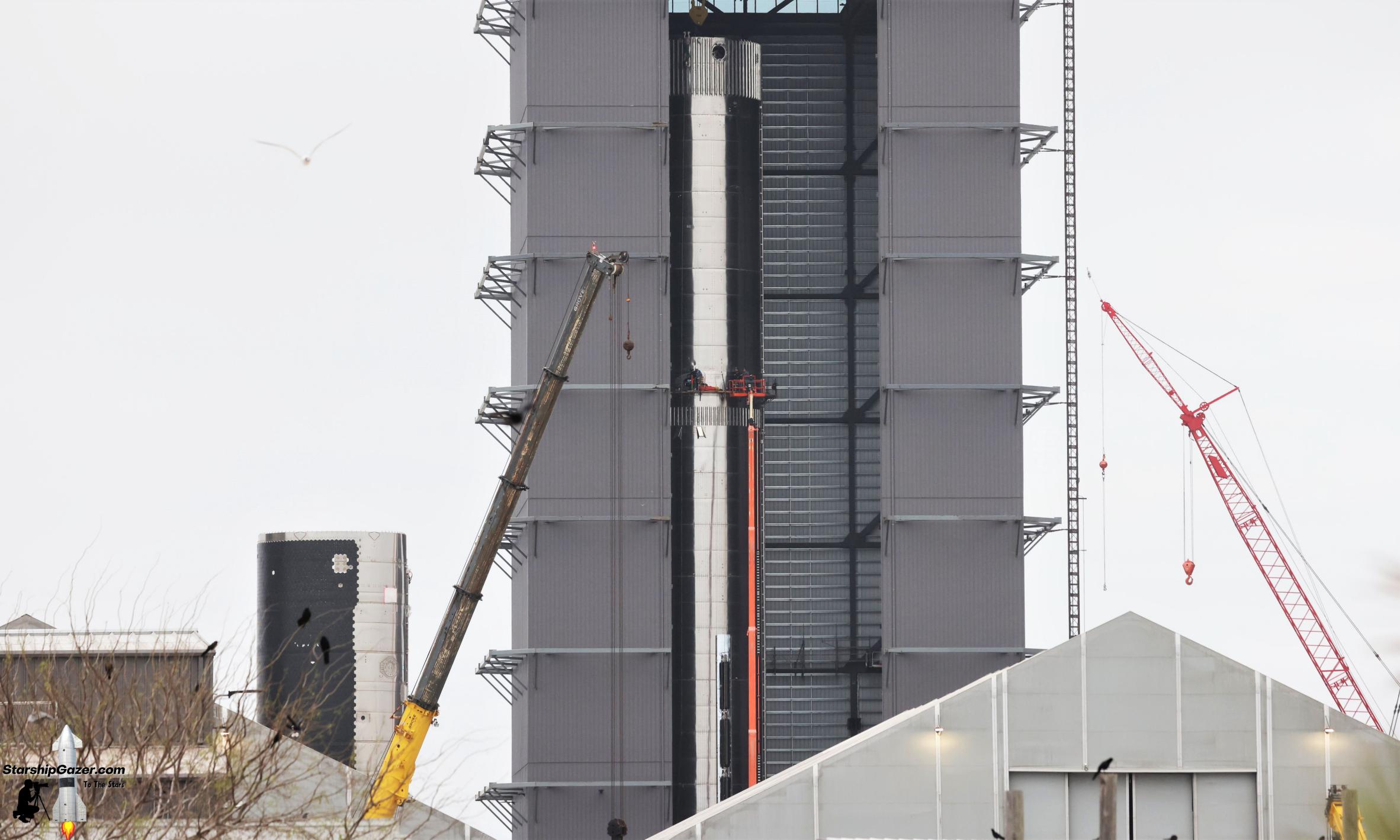 After a bit less than three months of work, SpaceX has finished stacking its newest Super Heavy booster. (Starship Gazer)

Designed to launch Starship’s massive, namesake upper stage part of the way to orbit, Super Heavy is in many ways simpler than Starship but just as complex and unprecedented in others. Ignoring SpaceX’s unusual plans to have boosters land on huge mechanical arms installed on a skyscraper-sized tower, Super Heavy is ‘merely’ a large vertical-launch, vertical-landing liquid rocket booster – the likes of which SpaceX already has extensive experience with through Falcon 9 and Falcon Heavy. What mainly sets Super Heavy apart is its sheer scale.

Measuring around 69 meters (~225 ft) from tip to tail, Super Heavy – just one of two Starship stages – is almost as tall as an entire two-stage Falcon 9 or Falcon Heavy rocket. At nine meters (~30 ft) wide, a single Super Heavy booster – effectively a giant steel tube – should be able to store at least six or seven times as much propellant as Falcon 9 and about two to three times as much as Falcon Heavy. Engine count and peak thrust are similarly staggering.

SpaceX’s newest Super Heavy prototype – Booster 7 (B7) – expands those engine-related capabilities even further. Instead of the 29 Raptor V1 engines installed on Super Heavy B4, Booster 7 is designed to support up to 33 Raptor V2 engines. While the V2 design significantly simplifies Raptor’s design to make it easier to build, install, and operate, it also substantially boosts maximum thrust from around 185 tons (~410,000 lbf) to at least 230 tons (~510,000 lbf). In theory, if Super Heavy B7 is outfitted with a full 33 Raptor V2 engines capable of operating at that claimed thrust level, Booster 7 could theoretically produce at least 40% more thrust than Booster 4. B4, however, has yet to attempt a single static fire.

The fact that SpaceX hasn’t put Booster 4 through a single full wet dress rehearsal (a launch simulation just shy of ignition) or static fire test after more than half a year at the orbital launch site has led many to assume that the prototype is likely headed for premature retirement. With Booster 7 now perhaps just a week or two away from test-readiness, SpaceX finally has a viable replacement capable of both carrying the flame forward and kicking off the qualification of the first prototype designed to use Raptor V2 engines.

Booster 7 features a number of other design changes, including sleeker raceways (external conduits that protect wiring and smaller plumbing); a different layout of the pressure vessels, ‘hydraulic power units,’ and umbilical panel installed on its aft; and significant changes to the aerocovers that slot over that aft hardware. Beyond its Raptor engines, the two next most substantial modifications made to Super Heavy Booster 7 are arguably a pair of strake-like aerocovers and the addition of large internal ‘header’ tanks meant to store landing propellant.

A series of new sharp-edged aerocovers are now expected to slot over the top of two new pairs of five composited-overwrapped pressure vessels (COPVs) that run about a third of the way up Booster 7’s tanks. It’s possible that they will function a bit like strakes, fixed wing-like structures designed to improve aerodynamic stability. In comparison, Super Heavy B4 has four sets of two COPVs spaced evenly around the outside of its engine section.

Finally, SpaceX appears to have upgraded Super Heavy Booster 7 with a full set of internal header tanks, meaning that it should now be able to store all needed landing propellant in separate tanks. That significantly decreases the amount of pressurization gas required and makes it much easier to ensure that Super Heavy’s Raptor engines are fed with an uninterrupted flow of propellant during complex in-space and in-atmosphere maneuvers. Following SpaceX’s decision to turn Super Heavy’s tank vents into maneuvering thrusters, header tanks should also decrease the chances of liquid propellant being accidentally vented while the booster is in microgravity/free-fall conditions.

With any luck, Super Heavy B7 will be fully assembled and ready for proof testing. It’s very likely that it will take SpaceX several more months to mature Raptor V2’s design into something ready for flight and produce and qualify at least 33 of the engines but in the interim, Booster 7 can hopefully kick off cryogenic proof and wet dress rehearsal testing as early as late March or early April.