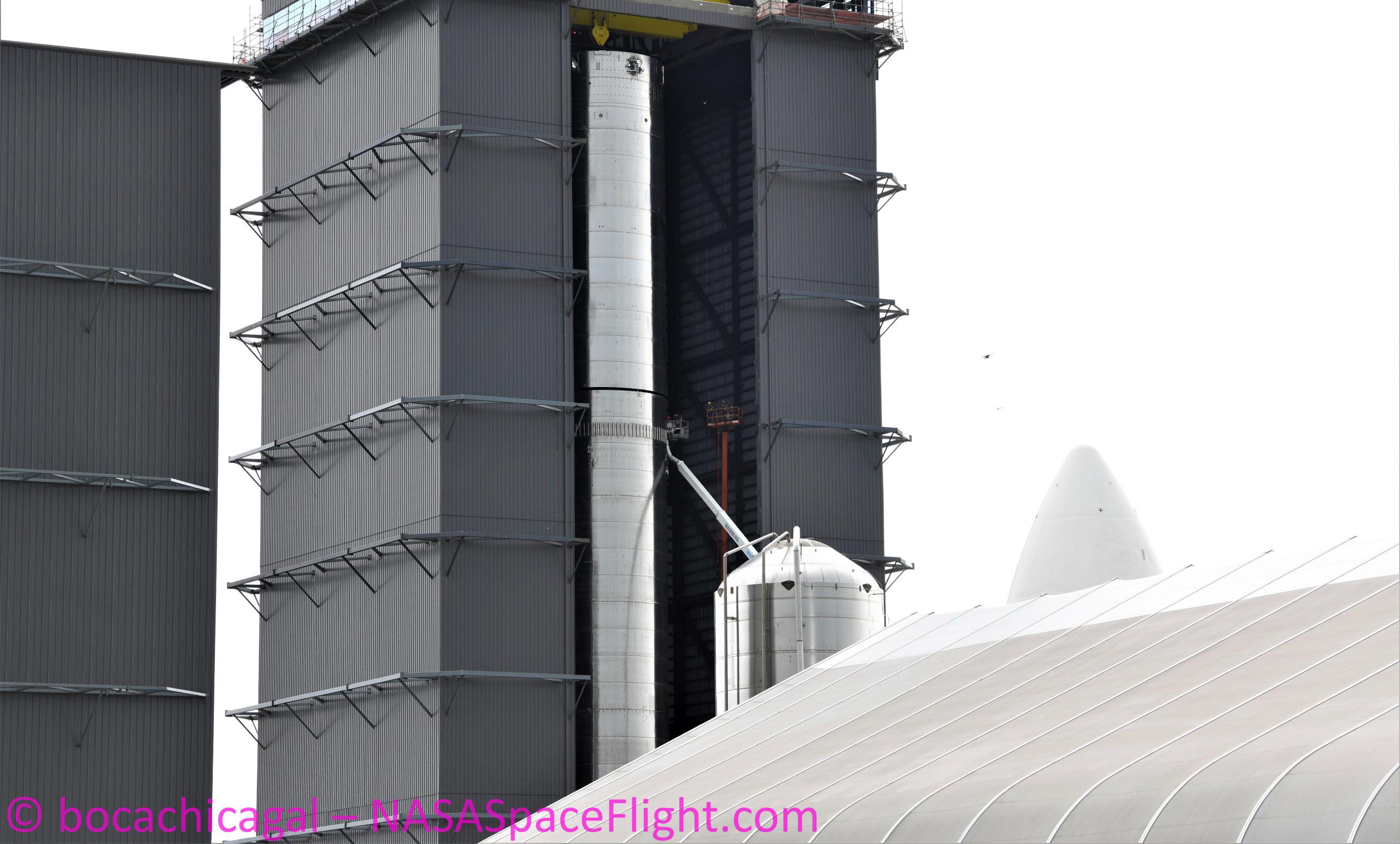 Just a few days after CEO Elon Musk said that SpaceX’s first true Super Heavy prototype was “almost done,” the booster has been stacked to its full height.

Standing more than 65 meters (~215 ft) tall, Super Heavy Booster 3 (B3) assembly is now just a few major welds away from completion after SpaceX teams mated the final two sections of its propellant tanks and structure. Assembled separately out of approximately 12 barrel sections each made up of 2-4 steel rings, Booster 3’s methane tank (13 rings) and oxygen tank (23 rings) were stacked together on June 29th, just over six weeks after the process began.

Earlier the same day, speaking at the 2021 Mobile World Congress, Musk confirmed what was now fairly clear to most observers, stating that SpaceX is “going to do its best” to complete Starship’s first orbital (or, at least, space) launch attempt “in the next few months.” In other words, a several-month-old launch target of no later than July 2021 is most likely out of reach despite a strong effort from SpaceX.

The most significant technical hurdles still in the way involve a few incremental Starship milestones and, more importantly, the qualification of the largest and most powerful rocket booster ever built. Standing almost as tall as an entire two-stage Falcon 9 or Falcon Heavy, Super Heavy is expected to weigh more than 3500 tons (~7.7 million lbs) and produce at least ~5000 tons (~11 million lbf) of thrust at liftoff – more than any other rocket booster in history, liquid or solid.

Borrowing heavily from Starship, Super Heavy is mostly built with the same techniques out of the same steel rings, stringers, and structures, save for a few booster-specific components. However, Super Heavy is also designed to use 29-32 Raptor engines while the most SpaceX has ever simultaneously installed, tested, or flown is three. In other words, while Super Heavy is in many ways simpler than Starship, it will still be treading plenty of new ground when it heads to the launch pad for the first time.

Plenty of final integration tasks remain before Super Heavy B3 will be ready to start qualification testing but SpaceX could feasibly be ready to roll the booster to the launch site within the next week or two. Once installed on a former Starship launch mount that’s been customized for booster testing, Super Heavy will likely be put through its first cryogenic proof and static fire test(s) to verify that the massive rocket is performing as expected. The static fire process could be fairly lengthy if SpaceX decides to incrementally increase the number of Raptor engines installed.

In the likely event that Booster 3 begins testing without engines installed, SpaceX will also have to go through the process of installing up to 29 Raptors while Super Heavy is sitting out in the elements on a launch mount. Based on experience with Starship, installing that many engines in situ could take at least several days – and maybe longer. All told, the fun is only just beginning.