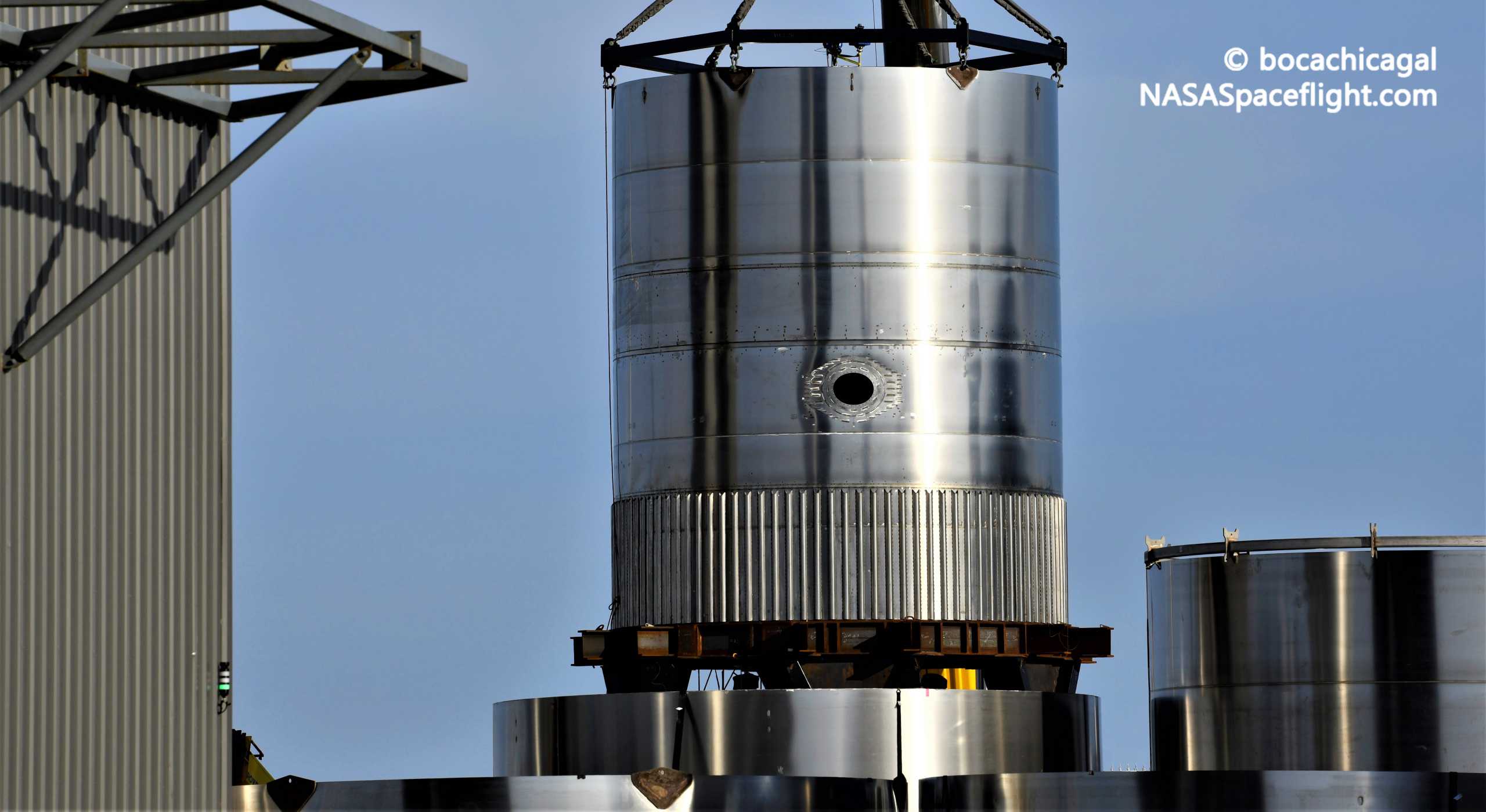 The latest in a long line of Starship 'test tanks' is almost ready to head to the launch pad. (NASASpaceflight - bocachicagal)

SpaceX has almost completed a ‘test tank’ meant to ensure that Starship’s Super Heavy booster is capable of withstanding the immense thrust of more than two-dozen Raptor engines.

Believed to be known as test tank BN2.1, the prototype’s latest appearance comes on the heels of news from CEO Elon Musk that SpaceX has upgraded Super Heavy with one extra Raptor engine – with plans to add another three down the road. The results of that tank’s imminent test campaign will likely be crucial as the company shifts its focus sending Starship to orbit (or close) as soon as possible.

Prior to a new Super Heavy booster ‘thrust puck’ design first spotted on May 29th, at least two separate booster engine section prototypes completed in the last few months sported an earlier variant more akin to a donut. At that point, Super Heavy’s design had a central cluster of eight gimballing, throttleable Raptors surrounded by a ring of 20 Raptor Boost (“RBoost”) engines – a variant meant to trade the ability to throttle for ~25% more thrust.

While Super Heavy booster BN1’s almost immediate scrapping – prior to a single test – guaranteed that major design changes were on the way, exactly what those changes would be was anyone’s guess. The appearance of a new booster ‘thrust puck’ design and Musk’s subsequent announcement that Super Heavy will “initially” have 29 – not 28 – Raptors likely mean that that engine section redesign was a major contributor to BN1’s instant obsolescence. The only other major change SpaceX clearly made with booster BN2 was switching the positions of its liquid methane and liquid oxygen tanks, ensuring that Super Heavy’s heavier oxidizer is closer to the rocket’s base.

Musk also stated that SpaceX will eventually upgrade Super Heavy to 32 engines, giving future boosters a central cluster of 12 engines that the SpaceX CEO says will significantly improve the efficiency of boostback burns.

Even in its weakest configuration, Super Heavy will still be more than 60% more powerful than Saturn V and 25% more powerful than N1 – the largest rockets to have ever successfully or unsuccessfully flown. That immense thrust demands a structure capable of surviving those extreme forces while simultaneously feeding dozens of Raptors up to ~28 metric tons (~61,000 lb) of propellant every second and withstanding several thousand tons of liquid oxygen – all without leaking, cracking, or flexing too much.

While BN2.1 wont have any of the plumbing associated with dozens of Raptors, nine hydraulic rams will let SpaceX subject its Super Heavy thrust structure to the simulated thrust of some number of engines. Given the presence of nine rams and nine clustered engines, it’s unclear if BN2.1 will only test that main thrust structure or if those rams will somehow be spread out to simulate the thrust of a full 29 engines – 20 of which will instead transfer most or all of their thrust into Super Heavy’s skirt.

Regardless, if successful, BN2.1’s test campaign should leave SpaceX on track to attempt Starship’s inaugural spaceflight as early as Q3 2021. If issues arise, that target could easily slip to Q4 or into 2022, but SpaceX’s test tank campaigns have historically been very successful.