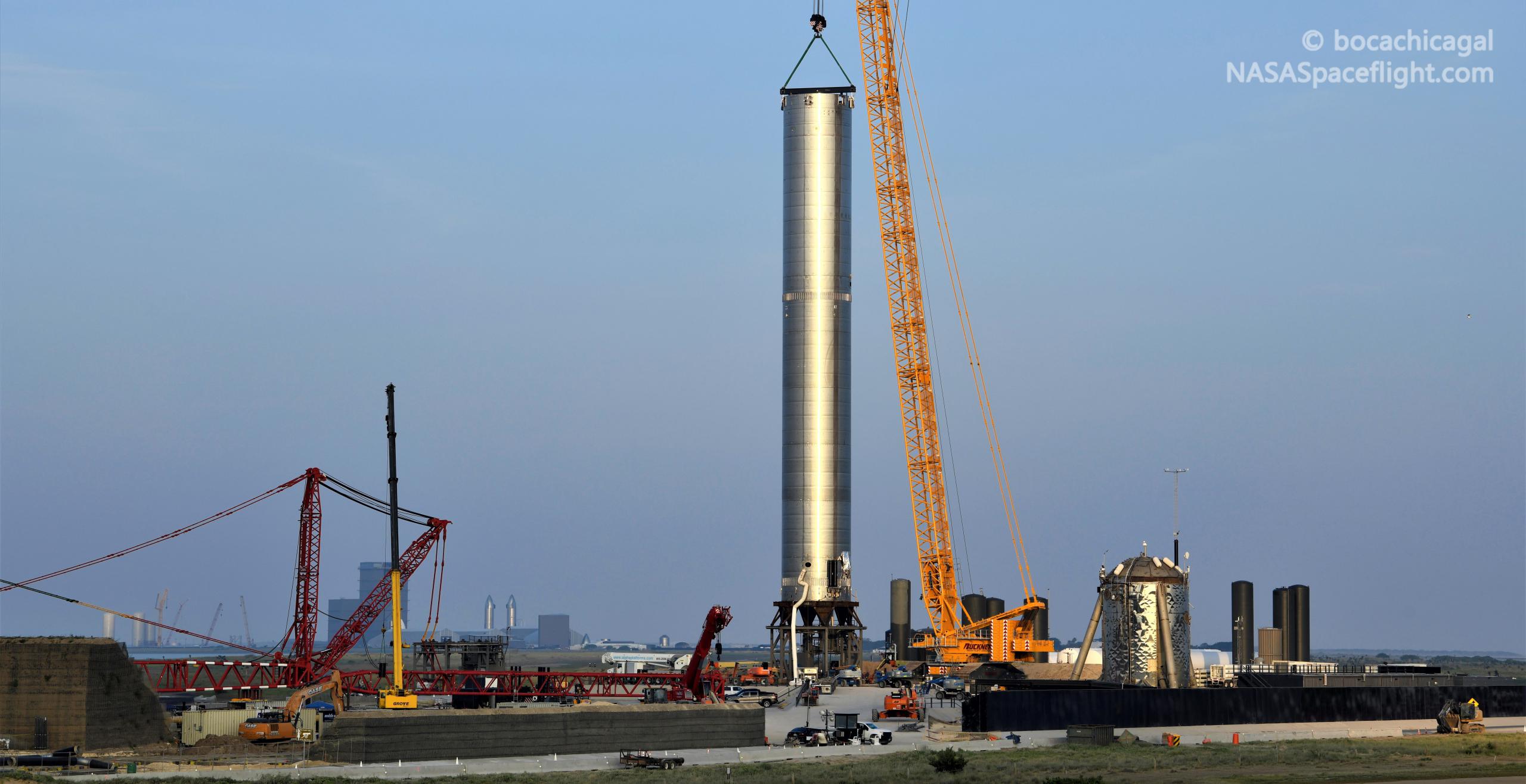 Super Heavy Booster 3 could fire up one or several Raptor engines for the first time as early as Thursday, July 15th. (NASASpaceflight - bocachicagal; edits by Eric Ralph)

After an apparent false start on Wednesday morning, SpaceX has distributed a second safety alert among Boca Chica residents in anticipation of the first static fire of a Super Heavy booster as early as July 15th.

Delineated by highway and beach closures filed in advance with Cameron County, Thursday’s window stretches from 12pm to 8pm or 10pm CDT (UTC-5), giving SpaceX 8-10 hours to put the first functional Super Heavy booster prototype through its most challenging tests yet.

Known as a static fire, what is a mostly routine test for operational rockets is a bit more of a challenge for a first-of-its-kind prototype. Notably, on July 12th, Super Heavy Booster 3 survived its first ‘cryogenic proof’ pressure test, withstanding the thermal and mechanical stresses created when the rocket was filled with a few hundreds tons of liquid nitrogen and the expanding gases created as that cryogenic fluid then warmed and boiled. However, Booster 3 has yet to perform any kind of test involving the combustible, explosive liquid oxygen and methane propellant needed to fuel Raptor engines.

By all appearances, SpaceX aims to roll Super Heavy’s first wet dress rehearsal (WDR; like a ‘cryo proof’ with real propellant) and static fire into one busy day of testing. That combined WDR and static fire will likely be the first time ever that a launch vehicle as large as Super Heavy has attempted to pressurize its tanks autogenously, referring to the process of using a rocket’s own fuel and oxidizer to generate ullage gas. Starship prototypes notoriously struggled with their smaller autogenous pressurization systems – and jerry-rigged alternatives – on several occasions.

In other words, even an ignition-free wet dress rehearsal test completed with autogenous pressurization would be a major success and hurdle surmounted for Super Heavy. If SpaceX manages to perform the first booster WDR and static fire on the same day, it would indicate that the company has extreme confidence in Super Heavy.

Despite an aborted attempt on July 11th, SpaceX outfitted the rocket with one Raptor on Saturday, July 10th and installed another two engines in quick succession on Tuesday, July 13th – likely in an odd triangular configuration on the booster’s central nine-engine ‘thrust puck.’ Why that particular configuration was chosen instead of something more symmetric is unclear but it does decrease the odds of a multi-engine test on Super Heavy’s first static fire without a clear reason to assume that testing such an odd engine placement would provide some valuable insight.

In comparison, two engines on opposite sides of Super Heavy’s inner ‘ring’ or three engines forming a line across that ring are two configurations that boosters are very likely to use during landing burns. Regardless, according to Next Spaceflight’s Michael Baylor, SpaceX may start Super Heavy B3’s static fire test campaign with just one engine, so it’s not impossible that the current configuration is just a part of the incomplete process of installing five or more engines.

As with all Starship development, it’s equally likely that Super Heavy’s first wet dress rehearsal and static fire test attempts will slip late into the window, to Friday, or even to the week of July 19th. Stay tuned for updates!