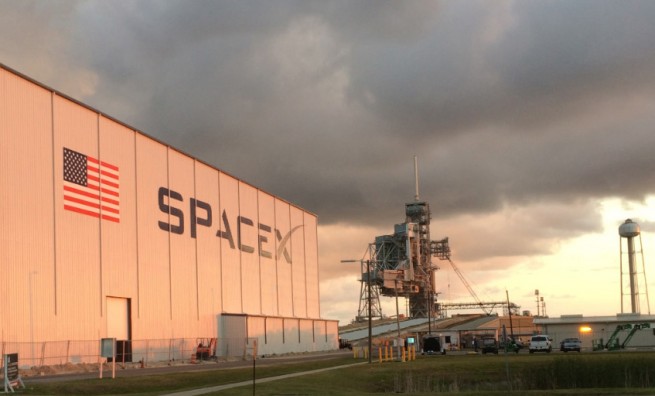 SpaceX is finishing up work on Launch Area 39A in Florida, where it will launch its first Falcon Heavy rocket in 2017. It is also continuing work on its commercial launch facility in Brownsville, Texas.

SpaceX is finishing up renovations at Launch Complex 39A, the former shuttle and Apollo launch pad at NASA’s Kennedy Space Center that the company is leasing. SpaceX intends to use that location for its Falcon Heavy rocket that will be a critical part of manned missions to the International Space Station. Those flights are scheduled to begin in late 2017. “We have completed and activated Launch Complex 39A,” SpaceX president Gwynne Shotwell says.

As part of the preparations for Falcon Heavy missions, SpaceX is testing the 212 foot high Transporter Erector (TE) that is used to move launch ready rockets and spacecraft from the processing hangar near the base of the pad and lift them into a vertical position over the flame trench. It is much larger and stronger than the transport erector used at Launch Site 40, where the regular Falcon 9 rockets begin their space flights.

The TE, as it is called, will be raised and lowered at the launch site to make certain it is fully functioning and can perform its role as an essential part of future International Space Station missions. Once the rocket is in position on the launch pad, the TE will lift the Crew Dragon spacecraft into position on top of the Falcon Heavy rocket.

Work continues to go forward on the commercial space launch facility SpaceX is building on the Gulf Coast in Brownsville, Texas. Construction there began in 2014 and has been slowed by poor soil stability at the site. As a result, the company has needed to do two years of what Shotwell calls “dirt work,” which means bringing in and compacting soil that is stable enough to support launch facilities.

“It’s a little more expensive than what we were originally planning, but it will be an important site for us,” Shotwell told Space News. Once completed it will alleviate congestion problems at the company’s other launch sites in Florida and California. Shotwell says the first launch from the Brownsville site should take place in 2017 or early 2018, though she expects SpaceX to increase rocket launches to every 2 to 3 weeks, starting this year.