Former Tesla employee and alleged saboteur Martin Tripp is taking the next step in his fight against the Elon Musk-led company. Just recently, Tripp started a crowdfunding campaign to raise half a million dollars for his legal fees and possible travel expenses as he prepares to face the electric car maker in court.

The GoFundMe page, which could be accessed here, went live earlier today, with the crowdfunding initiative gaining $5,180 worth of contributions as of writing. According to the former Tesla employee’s description of his campaign, he is asking the public for financial help as he battles the “machine” that is Tesla. Tripp states that the funds donated to him would be used to cover his legal fees and travel expenses if necessary. He also mentioned a countersuit against Tesla. 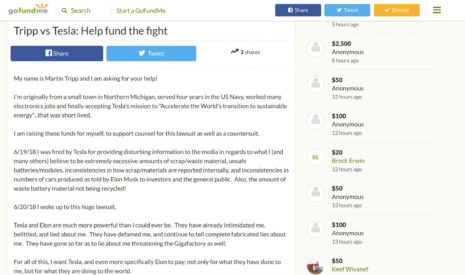 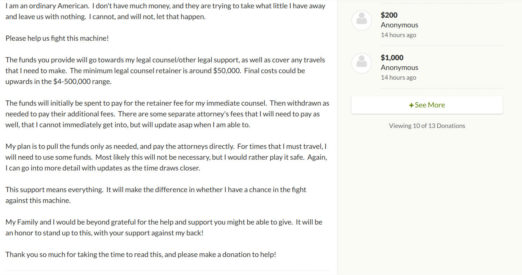 “Tesla and Elon are much more powerful than I could ever be. They have already intimidated me, belittled, and lied about me. They have defamed me, and continue to tell complete fabricated lies about me. They have gone so far as to lie about me threatening the Gigafactory as well. For all of this, I want Tesla, and even more specifically Elon to pay; not only for what they have done to me, but for what they are doing to the world,” Tripp wrote.

Martin Tripp’s legal battle against Tesla started earlier this month, after the Elon Musk-led company filed a lawsuit against the former employee for allegedly hacking into Tesla’s Manufacturing Operating System, sending confidential data to external sources, as well as misreporting to the media. Prior to filing the lawsuit, Elon Musk posted a company-wide email stating that a saboteur was within Tesla’s ranks. Musk’s email, as well as the lawsuit Tesla filed in a Nevada court, both noted that Tripp had admitted to his offenses after being questioned.

Tripp, for his part, later claimed that he was being targeted by the company for being a whistleblower. Tripp also claimed that he only leaked information to the media because he was alarmed at the company’s unsafe practices. Things later got more dramatic when Tesla noted that it had received a tip from one of Tripp’s friends warning that the former employee could be planning an attack at the Gigafactory.  Later during the day, the Storey County Sheriff’s department issued a statement saying that there was no threat to Tesla’s NV facility.

In the midst of the drama surrounding Tripp’s alleged sabotage, Tesla has posted a job listing for an Intrusion Detection Security Engineer, who will be tasked to ensure the safety of the company’s information. Tesla’s ideal candidate for the post is someone with experience in dealing with multiple security domains, intrusion detection, incident response, and malware analysis.